Six police officers who speak English, Japanese and Korean are at the service of foreign visitors at three Metro stations near the site of the second China International Import Expo.

One of them is Xu Wenyi, who speaks English and Japanese. She works at East Xujing Station on Line 2 and can be found at Exits 4, 5 or 6.

Xu said both Chinese and foreigners make inquiries about directions when arriving at the station.

“Many foreigners are not sure if they can get help from us. When I spot someone looking hesitant, I’ll come up to help,” she said.

Xu, who has been working as a police officer for nine years, normally works at the People’s Square Metro Station. Like many of her colleagues, she was assigned to work at East Xujing only for the expo, which is visited by hundreds of thousands of people.

With her knowledge of Japanese, she also provides translation support when Japanese speakers call police at the emergency number 110.

Xu is no stranger to big crowds at Metro stations. She said that People’s Square Station during the Chinese National Day holiday can be even more crowded.

Xu has two colleagues who speak foreign languages at East Xujing Station, while three other multilingual officers can be found at Zhuguang Road Station on Line 17 and the station of Hongqiao Railway Station on Lines 2, 10 and 17. 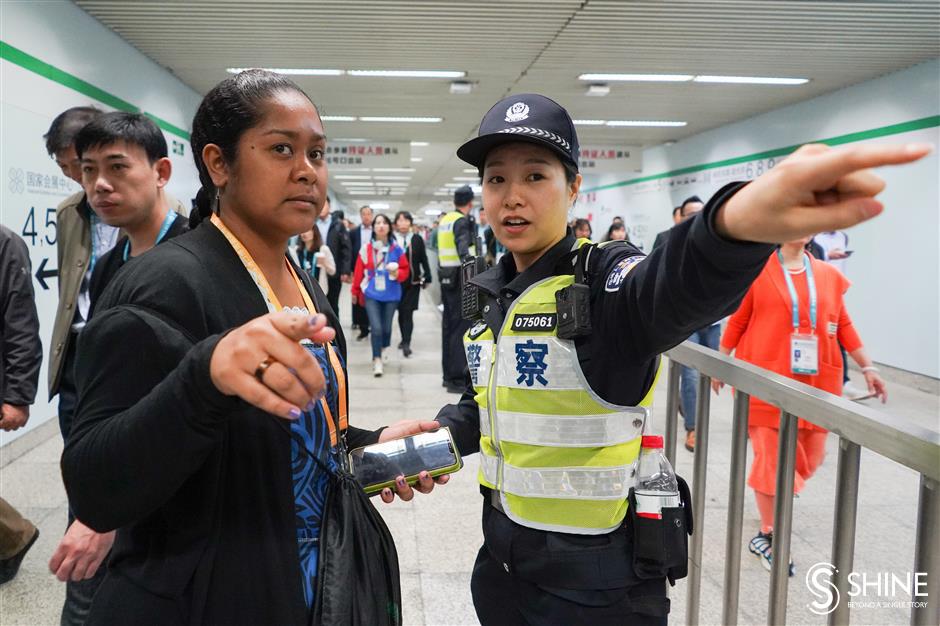 Xu Wenyi, a police officer who speaks English and Japanese, points the way for a foreign visitor to the second China International Import Expo on Wednesday.