Multilingual official gets expo message across

Lu Ruqing, a 37-year-old official with the Shanghai Administration for Market Regulation, is busy providing policy consultation and guidance on business registration at the second China International Import Expo. Fluent in six languages, he makes foreign exhibitors and attendees feel at home. 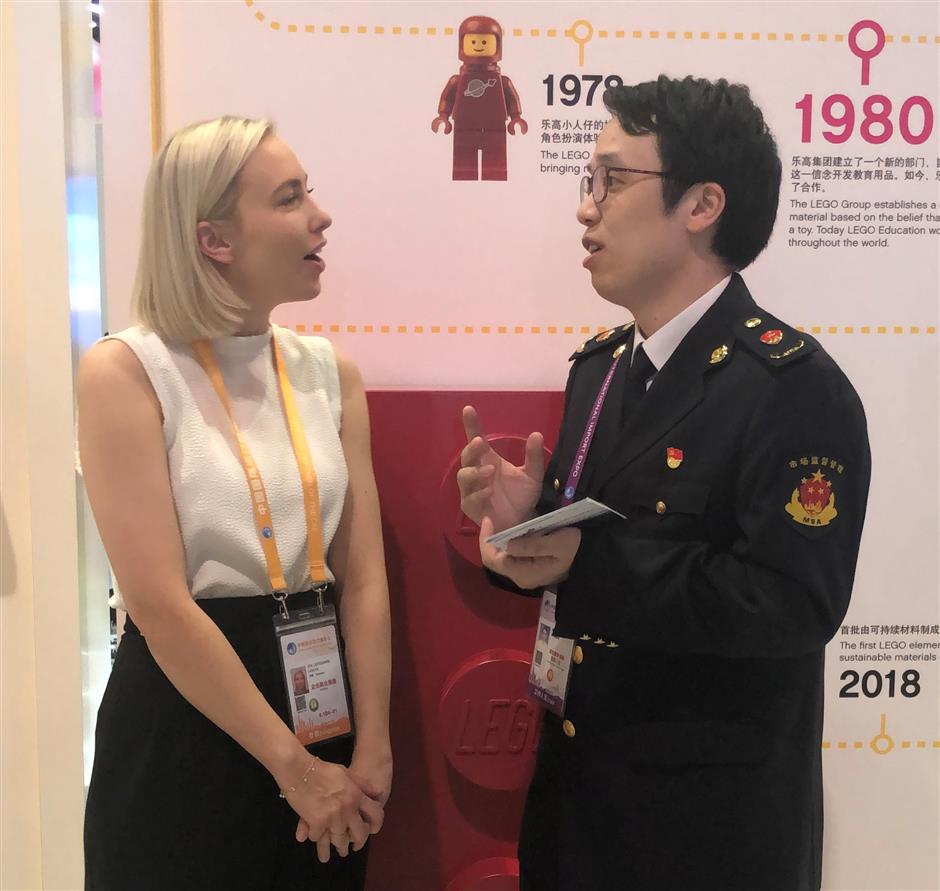 Lu Ruqing, a 37-year-old official with the Shanghai Administration for Market Regulation, talks with a foreign exhibitor during the expo.

“My major duty here is providing policy consultation and guidance on business registration, such as how to register different types of enterprises,” said Lu.

“There is big consultation demand from foreign-invested enterprises (FIE) because of the expo.

“In terms of FIE area, policies are updated rapidly, and the China Foreign Investment Law has been approved and will be implemented in January.

“We promote policies at the same time based on attendees’ demand.

“FIEs are in the majority. They ask about policies, what procedures are involved, when they can make an investment and how to set up an enterprise in China.

“Some attended the first expo, and wanted to conduct business now, and their questions range from making an investment, setting up businesses, expanding operation to import and exporting trade.”

In the 2019 Doing Business report, published by the World Bank, Shanghai saw its global rankings edge higher in most indicators in the bank’s global assessment, making large contributions to leap in China’s overall business environment position.

The city has hugely contributed to the nation’s business development with a 55 percent weighting in China in the World Bank’s Doing Business 2020 report.

Of the 10 indicators assessed by the bank, eight of them ranked in the top 60 globally and five in the top 30.

“We want to introduce Shanghai’s business environment to guests from home and abroad via the expo as a window,” said Lu.

There are two such spots of enquiry at the expo involving different government authorities such as registration, food and drug, consumer rights protection and authentication.

He has been working in business registration for five years. Before that, he worked at the Xuhui Branch, and his duty covered companies’ management and supervision, safeguarding consumer rights and administrative law enforcement.

He has been working in the area for 11 years.

He majored in Persian at the Shanghai International Studies University, and is a postgraduate of the Peking University.

He is also capable of Japanese, Spanish, Italian, Tajiki and French.

“I am very interested in language,” he said.  He learnt most of them via self-learning in spare time.

“It is not that difficult to learn language nowadays because there are a variety of means such as software and Internet, which is much more convenient for language learners compared with the past.”

The software allows him to practice language with native speakers.

He competed as a member of Shanghai team, and the team won the top award, said Wu.

“I use English for most of the time when talking with foreigners, but speaking other languages adds brilliance,” said Lu.

“If you communicate with others in their own languages, it is different,” he said.

He once received inquiries from Muslims, and he greeted them with the common language of Muslims.

“They are very delighted, and shook hands and posed photos with me,” said Lu. “Language narrows our distances.”

Six officials of FIE department can provide bilingual services, and Lu is one of the most outstanding for both professional competence and language ability.

Once a representative from Iran applied for business license and Lu used Persian in communication. The Iranian representative was very surprised and delighted.

“Language is part of our services,” Lu said.

“Because the market is more and more open, foreign capital is often influenced by new policies, which require us to keep learning and lift our service capability.

“This involves our understanding on business, and also supplementary items like language,” said Lu.

The team has received many letters of praise.

“The World Bank report shows our efforts are worthy and rewarding,“ said Lu.

There are big changes in Foreign Investment Law and Wu said the team will promote the law at the end of the year or early next year to make FIEs know what they should do and the government authorities can do for them.

The team also plans to visit and provide consultancy service for FIEs onsite, which is a part of their daily routines. “It has always been important to visit FIEs, at the same time of providing services, we could learn about the needs of FIEs and the market. Our job is not limited to sitting at windows and reviewing registration documents,” said Wu.

Lu did some translation and review work for materials such as the report of the World Bank.

“He is professional and is more suitable for the work than translation companies because he is familiar with these policies,” said Wu.