Hear, hear! This doctor can work wonders with the ears

When Yin Shankai steps into the operating theater, his patient is lying under shadow-less lamps in general anesthesia.

The patient has a cut behind one of his ears, which is the only part of his body not covered by a sheet. When the 55-year-old doctor takes over, the patient has already been lying there for about three hours, receiving a tissue scrape to expose a tumor to be removed.

Yin’s target is technically called acoustic neuroma, a kind of benign tumor growing on sheath around the acoustic nerve of the inner ear. It can cause vertigo, headaches, hearing loss and even loss of eyesight and facial paralysis.

Yin has been doing such surgeries for 30-plus years. He is president of the Shanghai No. 6 People’s Hospital Affiliated to Shanghai Jiao Tong University, where he also heads up what is called the otolaryngology-head and neck surgery department.

“We deal with a lot of symptoms that could be related to many different parts of the human body, such as vertigo,” Yin says. “Many patients suspect that there is something wrong with their brains, but in fact, the problem lies with the ears.”

Acoustic neuroma is an especially difficult case. There is a reason why the inner ear is called a “labyrinth” in anatomy. It is one of the most delicate parts of human body. It can take Yin, using a microscope, up to five hours to fully excise a tumor.

The image Yin sees through the microscope is projected on a big screen on the wall. From that, his assistants can watch how he cuts the tumor tissue with fine scalpels, little by little. 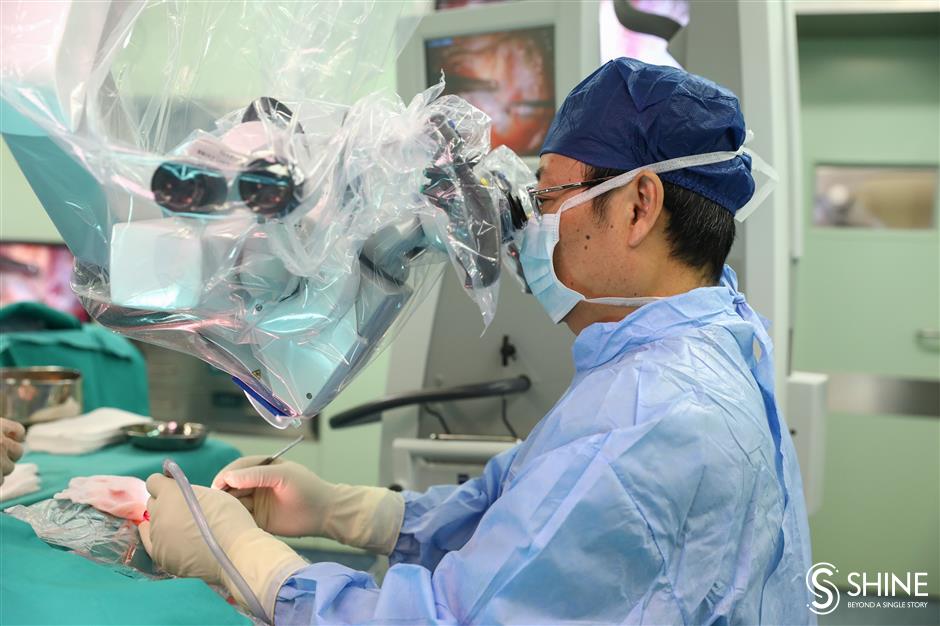 Yin Shankai, who has been doing ear surgeries for 30 years, puts his skills to work in the operating theater.

Yin’s department, which receives patients from all over China, always ranks among the top 10 of the nation’s hospitals. In many cases, the department is the last hope of patients with unresolved medical problems.

Yin had one unforgettable patient. He had suffered from poor hearing in both ears for 30 years, but one ear was better than the other. Six weeks before he was admitted to the hospital, the relatively good ear started to show rapid hearing loss.

“It was dramatic and we couldn’t find any reliable diagnosis for the newly worsening ear,” he says. “But we found acoustic neuroma in the other ear — the one that had been deaf for 30 years. We considered an artificial cochlear implant right after the tumor excision, so that the patient could regain some hearing. There was little literature on similar cases in the world.”

The surgery ultimately was successful. A week later, the patient could hear again. However, just when Yin was satisfied that everything was on course, the patient suddenly suffered a hemolytic post-operation reaction. He lost consciousness and his body circulation almost fully stopped.

“Hospital staff rushed to save his life,” Yin says. “We deployed experts in blood transfusion, kidney disease, neurology and emergency treatment to develop a treatment plan in one hour. We finally succeeded in dragging the patient from the jaws of death.”

Yin grew up in a town in Jiangsu Province, where his parents were both medical workers in a countryside hospital. In his words, he grew up in a hospital.

“I played with scalpels and injectors as toys when I was little, and I got to be very familiar with how a hospital works, including the functions of different departments,” he says. “I also learned to feel the emotions of doctors, like the anxiety of tending to severely ill patients, the joy of seeing them recover and the sorrow when their treatment fails.”

Back then, countryside hospitals had to be all things to all people, unlike contemporary community clinics that are responsible only for simple treatments. Doctors were often called on for treatments beyond their training specialties.

“It was said they had to treat children and pregnant women, with both surgical and physician skills,” he says. “What’s more, they often had to treat farm animals like pigs, horses and cows.”

Yin still remembers how his father, whose major was traditional Chinese medicine, were always immersed in books after work to learn as much as possible about treating people.

“At that time, students like me actually didn’t have many choices about majors,” he says. “And under the influence of my parents, I chose to study medicine.”

He became a doctor in 1984 after graduating from a Jiangsu local college, and furthered his studies while working. He obtained a doctoral degree about a decade later in Beijing, and did some advanced training in the United States and Italy.

After joining the Shanghai No. 6 People’s Hospital, he and his team engaged in research that provided beneficial results. For example, they managed to implant artificial cochlea into children as young as 1 year old.

“Before that, the operation was usually done when a child was 2 to 4 years old,” Yin said. “However, that was too late if the children were to develop normal communications skills.”

“According to the World Health Organization, about 20 percent of the people in the world suffer from the syndrome, which affects life quality a lot,” Yin says. “It causes low sleep quality, which leads to untimely sleep. I believe you have seen people sleep during work, meetings or other improper occasions, and they might even snore loudly.”

Current treatment methods provide nothing more than temporary medical relief. This year, a lab was built in the hospital to further study the syndrome.

“In fact, we still have very limited understanding about the syndrome — about how it happens and how it worsens,” Yin says.

“We have accumulated a lot of case studies for research. In the lab, we hope to finally get this puzzle solved and provide better treatment plans for patients.”

Yin and his team work in research at Shanghai No. 6 People’s Hospital.