Gu Haiyan got up at 4am on Sunday and spent some time putting on her make-up because she knew many people would ask her for selfies today.

This is the third time the 20-year-old wheelchair fencer has participated in the Shanghai marathon. This year, 20 wheelchair athletes will take part: 13 professional athletes and seven workers from Wisking, a wheelchair manufacturer.

At 5:30am, still in darkness, Gu and her team were at the rallying point about one kilometer away from the start line on the Bund. 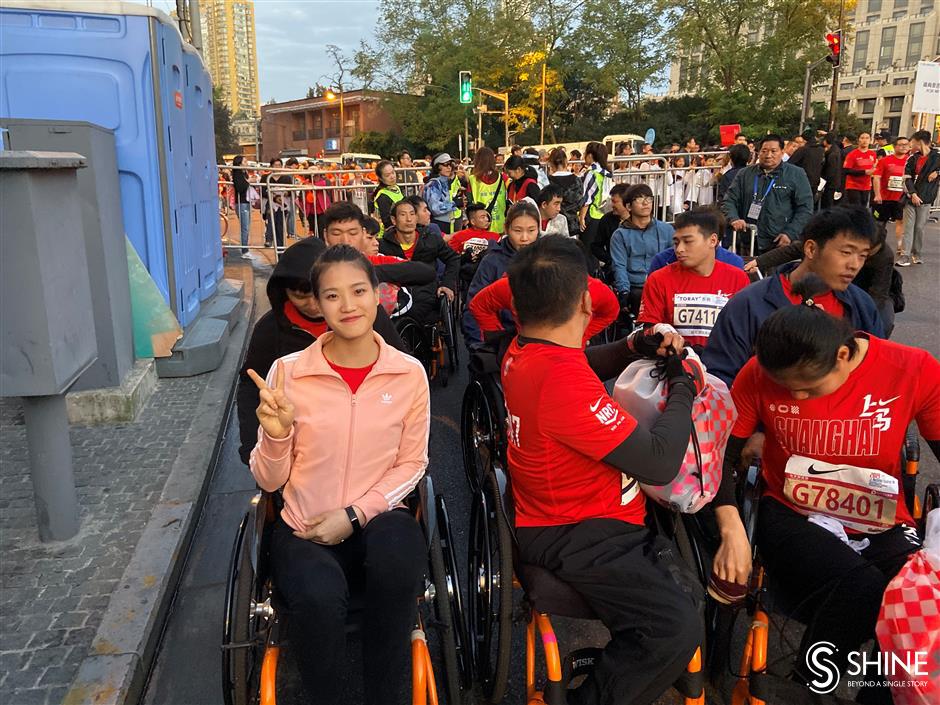 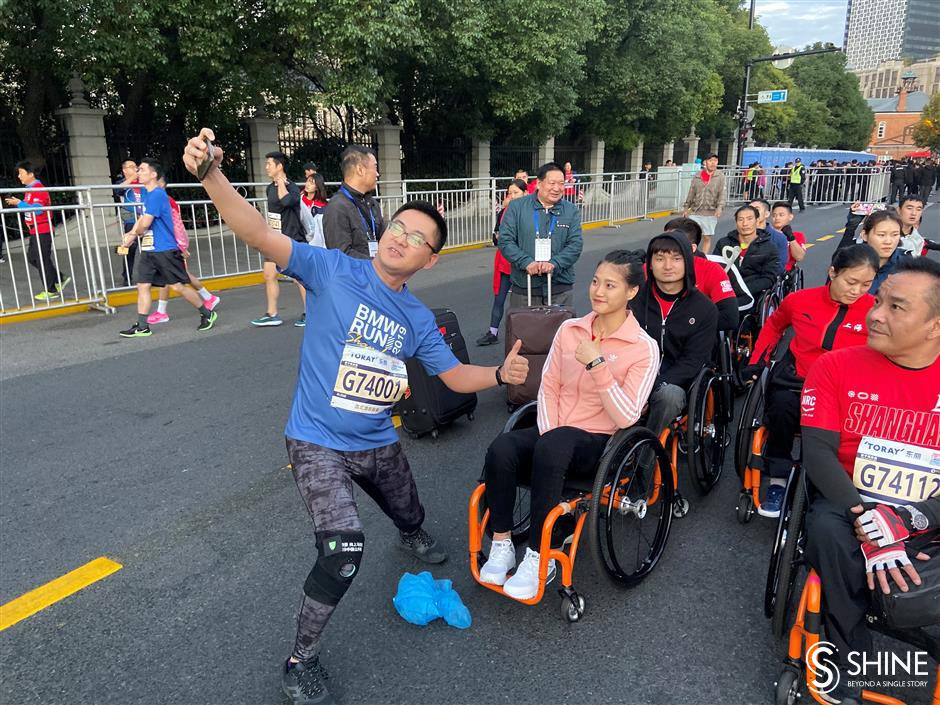 Everyone takes selfies with Gu.

“Remember to hold the formation and wait for your teammates,” Song Guochao, team leader from Shanghai Disabled Persons’ Federation encouraged the players.

This is also the third time Song has led the team. The 20 racers start with the rest of the 38,000 runners, but they will only follow a five-kilometer route to the Shanghai Exhibition Center near Jing’an Temple, while the professional runners charge to the Shanghai Stadium for the US$45,000 prize.

“We started practicing for the race about two weeks ago,” said Gu. Most of the race training took place at night. “For me the race is very tiring.”

When Gu was nine, a traffic accident took her left leg, but it didn’t take away her passion for sports, and she became an athlete when she was 14.

Last year, Gu attended the Asian Para Games in Jakarta and won the gold in sabre. Now, she is aiming at the Paralympic Games in Tokyo next year.

“Some of my teammates are competing in the Netherlands as I wait here for the sunrise,” Gu said. “I wish them good luck, but what I’m doing here also makes a difference.”

Gu came to Shanghai in 2015, she said compared with her hometown in Sichuan Province, Shanghai is doing a good job on accessibility for the disabled. But she said more than often she still sees people blocking the sidewalks for blind people or occupying barrier-free restrooms.

“Sometimes they just assume we won’t show up at such places,” Gu said. “Which is why I attend the race, to tell them I can be wherever I want to be.”

As the sun slowly crawled up, the team assembled near Waibaidu Bridge, where many runners going to the start line stopped and cheered for the wheelchair team. 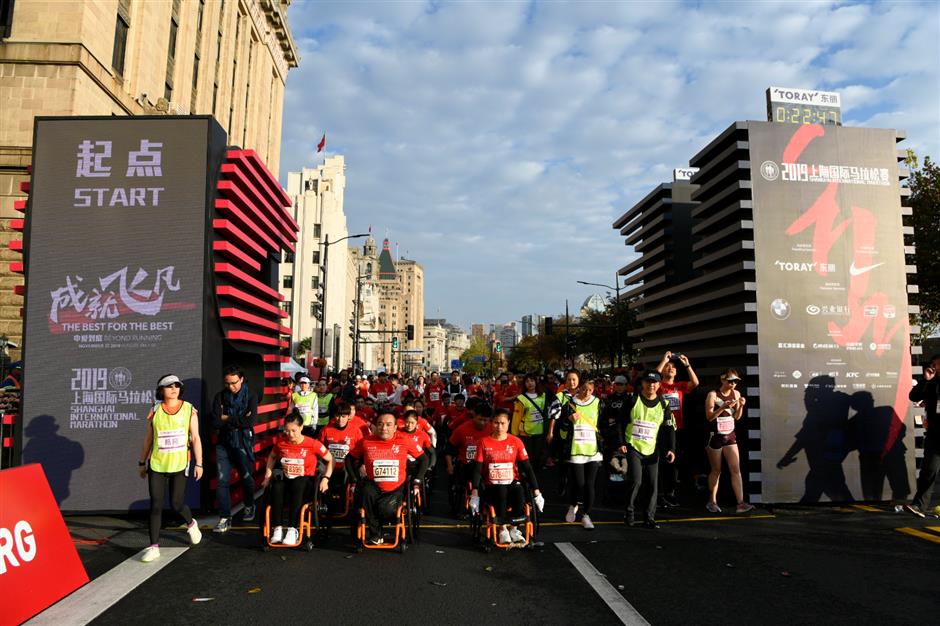 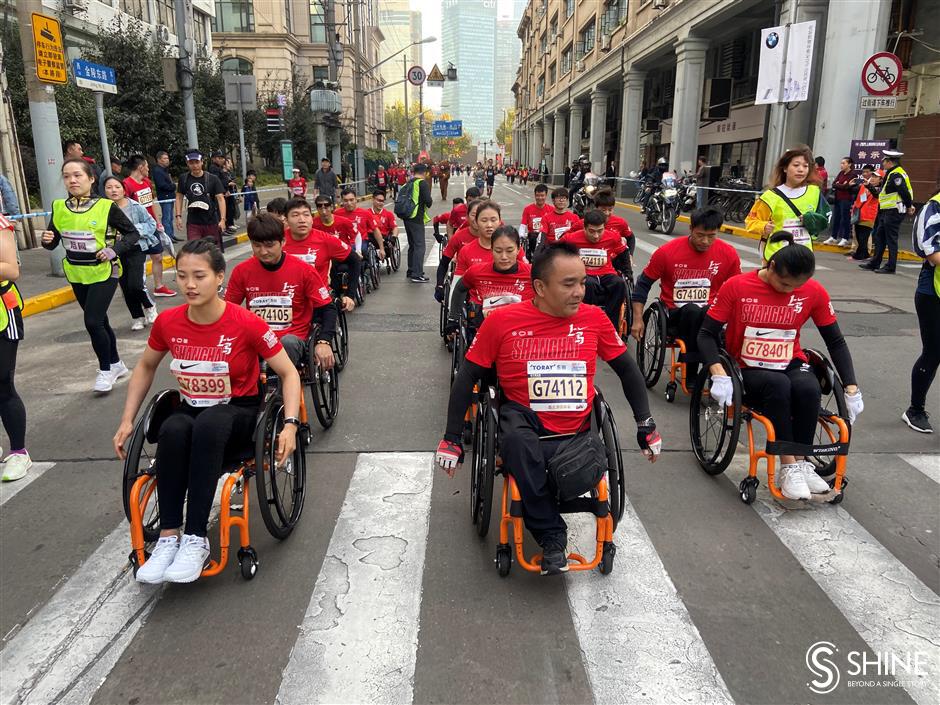 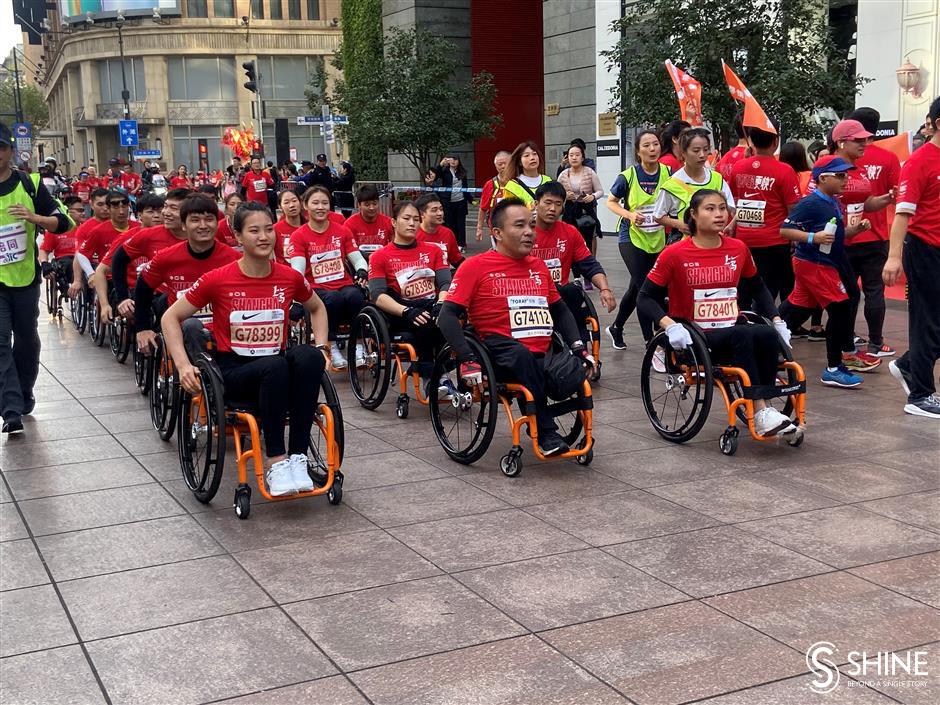 “I told you many would ask to take photos with us,” Gu said, putting on a smile and a V-sign when a photographer fixed the camera on her.

At 7am, the starting gun went off. Gu and her teammates wait ten minutes for the other runners to take off.

“The racers on wheelchairs are coming through, let’s make some noise for them,” the DJ shouted and the people standing along the street duly cheered for them, but Gu couldn’t help but laugh.

“You can’t imagine how touched I was when I first saw so many people cheering for us two years ago,” Gu said.

Racing side by side with Gu is Zuo Caiyun, a professional wheelchair racer with cerebral palsy. Her disease makes it hard for Zuo to stay in balance, and when she fell behind, volunteer Ren Xiaojing pushed her to catch up.

Ren and her six colleagues work for Japanese enterprise Konica Minolta. The company signed an agreement with the disabled persons’ federation in April this year, to provide job opportunities and social security for the athletes.

“Many of them will eventually retire as an athletes, what next?” said Ren. “We want to help, as much as we can.”

Ren’s colleague Yan Fangcheng has taken part in the marathons for the past two years, but failed to sign up this year. When she heard the company was recruiting accompanying runners, she didn’t hesitate at all.

“Wheelchair racers coming through,” Zhong Dajian bellowed. Zhong and his wife were taking part for the 16th time this year, volunteering to lead the wheelchair racers and clear the way for them. The 62-year-old told Shanghai Daily it was great to see people from different occupations and ethnicities running together.

“Everyone should run freely together,” he said.

“Are you alright?” Gu asked the Shanghai Daily reporter, who was running along with the team in a jumper and a pair of tight jeans with his backpack swirling behind his neck. “Hang on there, we are almost done.”

The team reached their destination at 8:10am. Song and the other officials from the federation were already there. Huang Chujie, one of the racers from Wisking, who attended full marathons on his wheelchair twice, said it felt like taking a walk in his backyard.

“Though technically I do not walk,” Huang said, making everyone laugh.

Song poured a cup of ginger tea for every member of the team. Song said sometimes disabled people fall into self-loathing, but he hopes more people can see the bright side of their lives as there is still much to do.

“Everyone gets a medal for completing the race,” he said. “It doesn’t matter how long they took or how far they have come through, but the fact that they are racing with over 30,000 people and they are laughing.”

Gu didn’t have much time to celebrate, she will take a half day break and go to bed early. 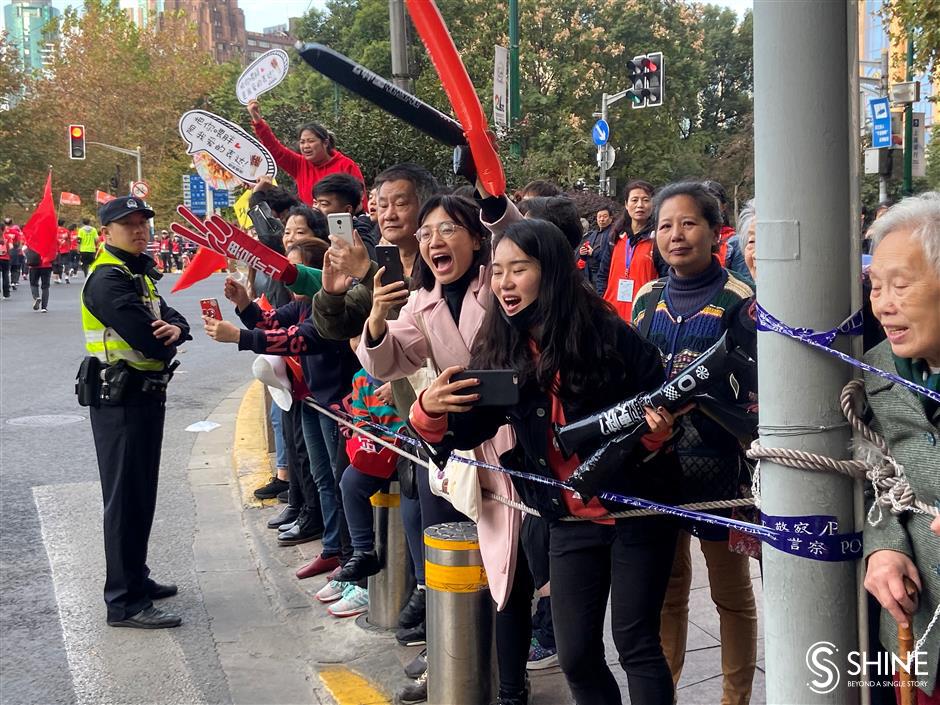 People cheer for the wheelchair racers.