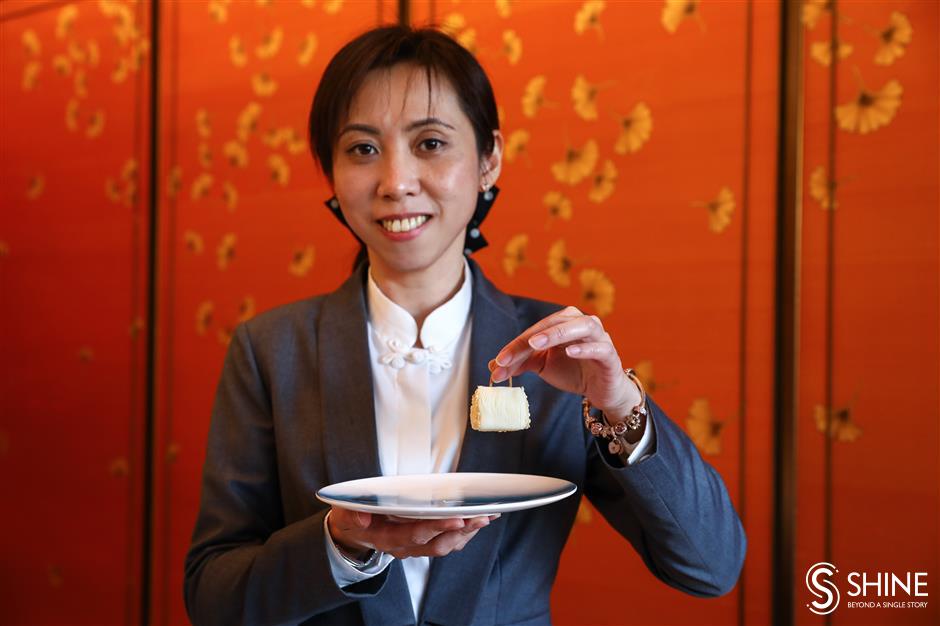 Dim sum blending traditional cuisine and innovative design has been presented at the Lu Bo Lang Restaurant near the historic Yuyuan Garden to celebrate the 2nd China International Import Expo.

The four dim sum resemble walnut, persimmon, peach and handbag. It is named "Heavy with Fruit" to wish a fruitful trade and deals inked at this year's expo.

The "handbag pastry" was invented to symbolize the fashion industry of France and celebrate relationship between China and France.

"The new set of dim sum not only has profound meanings but is also popular among diners, especially the handbag pastry," said Wang Shijia, deputy general manager of the restaurant and a dim sum master.

The handbag pastry is evolved from a traditional local dim sum, turnip pastry, as well as the roast pork pastry popular in south China.

The crisp multilevel wrapping made with fried flour resembles the leather of a handbag, while the handle, allowing diners to pick the bag up for photos, is made of a mixture of cocoa powder and flour. The filling is pure crab meat.

Inspired by a proposal from a visiting delegation of Galeries Lafayette to involve the elements of the French department store into Chinese dim sum, Wang and her master Lu Yaming, the general manager, came up with the new pastry.

Ma Zhilin, Wang's apprentice and head of dim sum at the restaurant, makes 200 handbags every day. 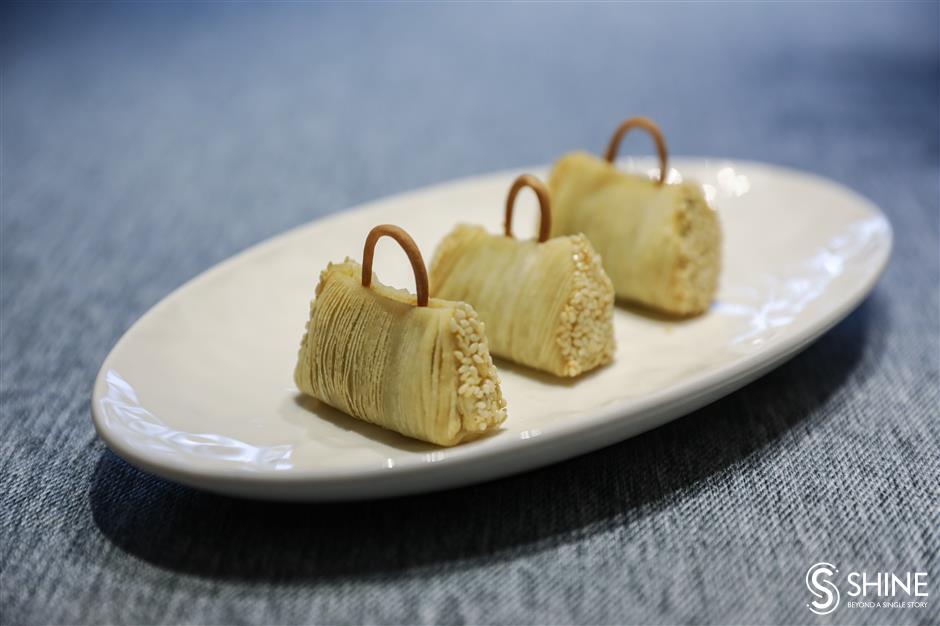 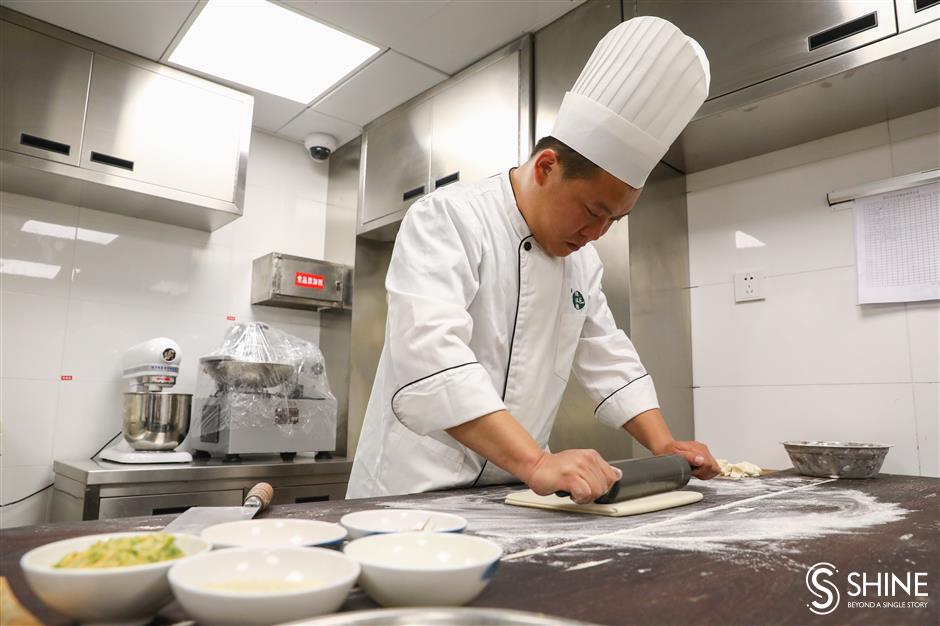 "We've improved the pastry and streamlined the making procedure to ensure every chef in the kitchen can make it easily," he added.

The bottom of the handbag, for instance, has been widened after customers complained the pastry could not stand upright on the plate for them to take photos, Ma said.

"Innovation keeps my daily job away from boredom and improves my emotional bond with the restaurant," Ma said. He works from 7:30am to 4pm every day and six days a week in the kitchen on the top floor of the restaurant. He was recruited by Lu and Wang after winning a youth dim sum-making award at a local vocational school when he was 17 years old.

With the skills acquired from Lu Bo Lang, Ma won China's top dim sum-making award in 2005. He made the eyebrow pastry, another work of the restaurant, and the classic shaomai.

The other dim sum in the set are the "jade walnut" symbolizing "harmony and happiness" due to the Chinese pronunciation of walnut; the "longevity peach," a traditional snack for birthdays of the elderly with new fillings of red date, pine nut and salted egg yolk: and the persimmon with peanut and dried tangerine peel creating a slightly sour and fresh smell for autumn.

In 2014, Wang designed four kinds of dim sum for the first ladies attending the Conference on Interaction and Confidence Building Measures in Asia.

They included a gourd-shaped pastry with a cashew filling, a leaf-shaped glutinous cake with a peanut filling, a peach-shaped steamed bun with salted egg yolk, and a mini rice dumpling wrapped in bamboo leaves and filled with red bean paste. 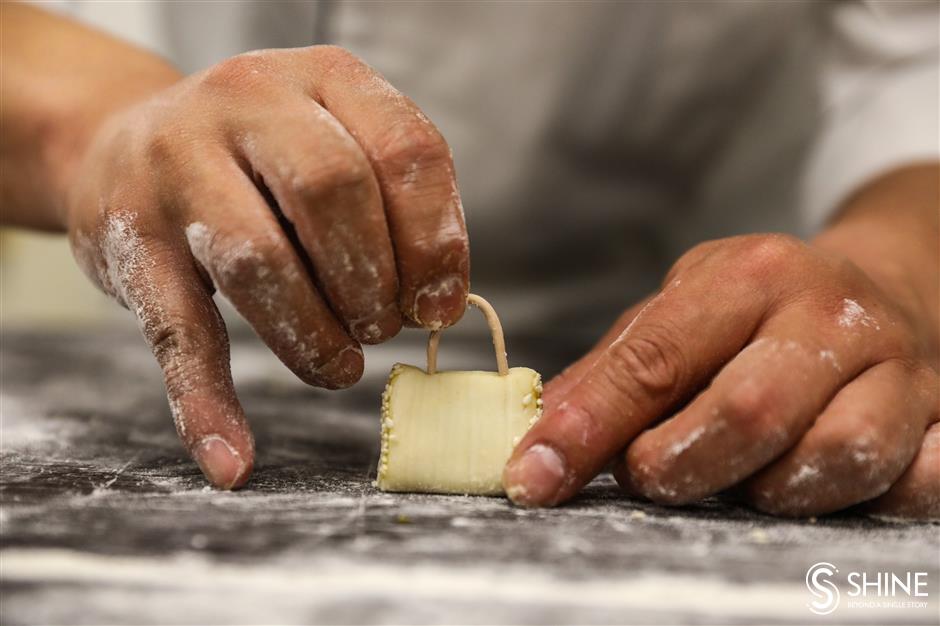 Ma Zhilin fixes the handle to the handbag pastry. 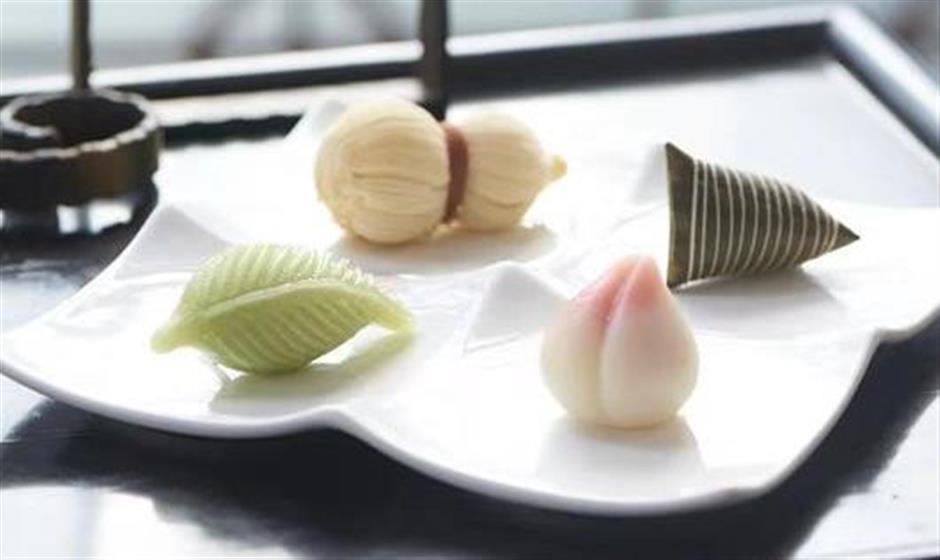 The four kinds of dim sum for first ladies attending the Conference on Interaction and Confidence Building Measures in Asia.

"Lotus rhyme" was presented in November 2018 to national leaders during the first CIIE. It includes a lotus root pastry with different fillings — cashew nut, egg yolk as well as dried tangerine peel and walnut — in each of the three knots of the lotus root. A carp dumpling is made with flour wrapping and fish meat.

The set meal resembles the scenery of the nearby Zigzag Bridge and the lotus pond, Wang said.

“We have to keep coming up with something new, and we have to improve our level of aesthetics,” she said. Each innovative dim sum requires over 20 times of experiments and more improvements, she added.

Though the restaurant has been renovated several times, she kept the original sandalwood board in the middle of the kitchen to remind her apprentices of following the traditional skills of their predecessors.

"Innovation must base on basic skills. Without decades of basic training, a chef won't be allowed to be involved any innovation," Wang said.

In its latest renovation, the interior of the three-story building has been redecorated with classic Chinese designs, but the appearance of the building and the traditional menu have been preserved.

The traditional eatery originated in the Ming Dynasty (1368-1644) when a teahouse was opened. In 1924, the teahouse was named Le Pu Lang, which has the same pronunciation as the current name Lu Bo Lang in Shanghai dialect.

The current eatery was built in 1979 when local authorities decided to open a landmark restaurant featuring authentic Chinese dim sum and Shanghai cuisine.

It initially gained popularity among locals after serving a menu of 12 traditional snacks to the public, which were designed in 1973 to serve Norodom Sihanouk, former king of Cambodia, when he visited the Yuyuan Garden.

It is famous for hosting dignitaries, including Queen Elizabeth II in 1986 and former US President Bill Clinton in 1998. It was awarded a “bib gourmand” rating by Michelin last year. 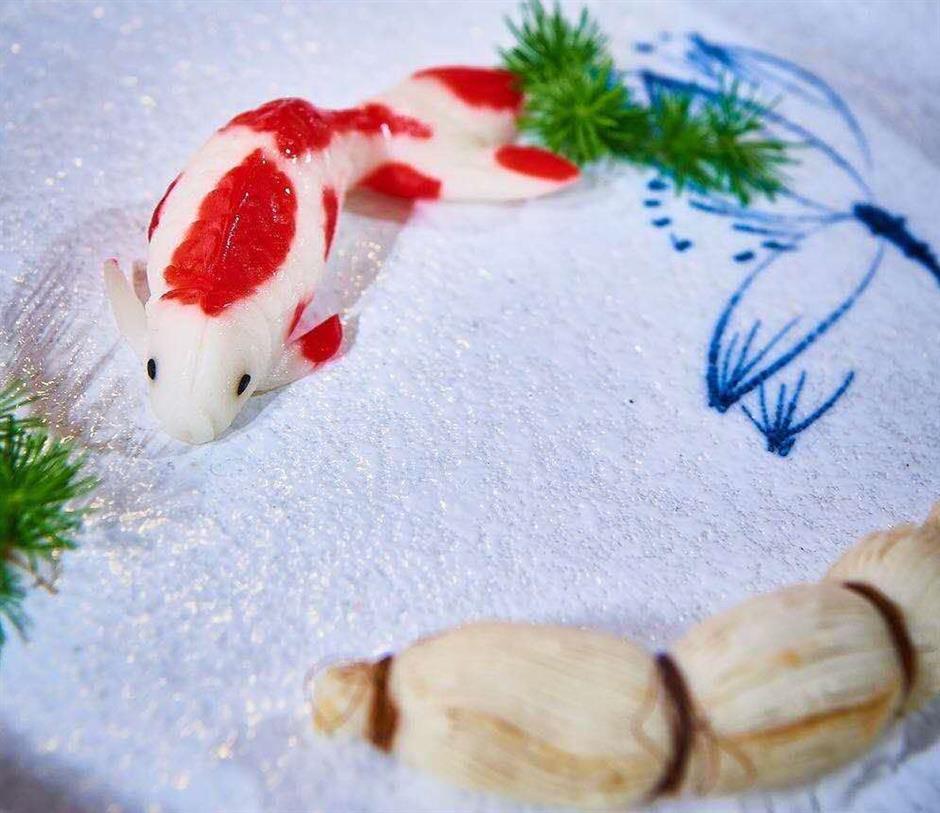 The "lotus rhyme" is presented in November 2018 to serve national leaders during the first CIIE.