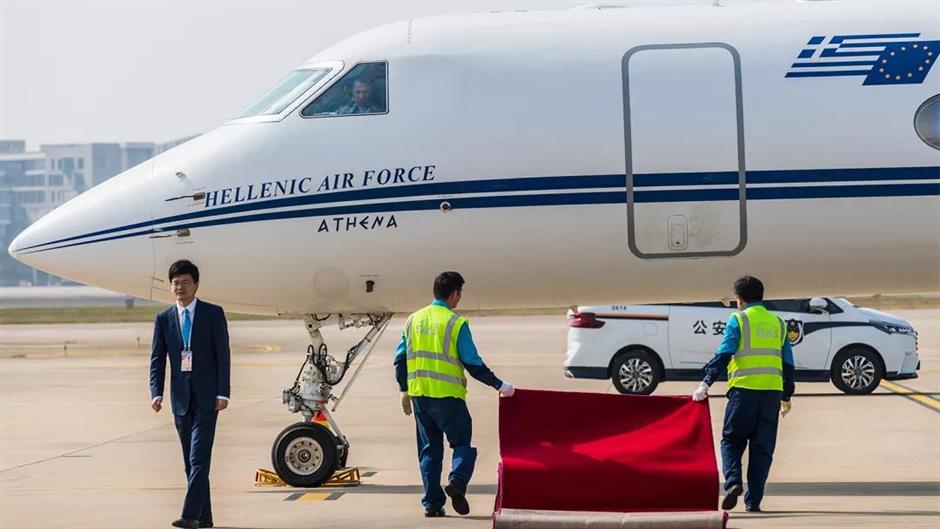 Airport staff receive a business jet at the Hongqiao airport during the CIIE.

Over 3 million people from home and abroad traveled to or from Shanghai through the city’s Pudong and Hongqiao airports during the second China International Import Expo, up 7 percent from last year.

The two airports handled a total of 21,454 international and domestic flights during the CIIE between November 1 and 10, a 6.38 percent increase on year, including many business and charter flights carrying high-ranking delegates.

Despite of the large volume, the punctuality rates at both airports were above 90 percent during the CIIE, the Shanghai Airport Authority said on Tuesday.

The Pudong airport managed to lift its on-time rate to 92 percent, from roughly 80 percent on average. The Hongqiao airport, which received most of the CIIE participants due to its proximity to the National Exhibition and Convention Center, achieved an on-time rate of 96.5 percent.

Thanks to supports from air traffic controllers, the airports managed to ensure safe and smooth operations under the busy airspace above the city during the CIIE, the authority said.

National leaders and VIP delegations from 64 countries and regions and three international organizations came to the city through the two airports for the CIIE. They took 1,287 flights and 82 business jets, about a 50 percent increase on year.

On November 5, the airport authority helped 12 guests, whose flight with Thai Airways, landed only three hours ahead of the opening ceremony of the CIIE to attend the event on time. The airport authority worked together with air traffic controllers, police, customs and immigration authorities to finish all entry procedures for the delegation within 22 minutes. 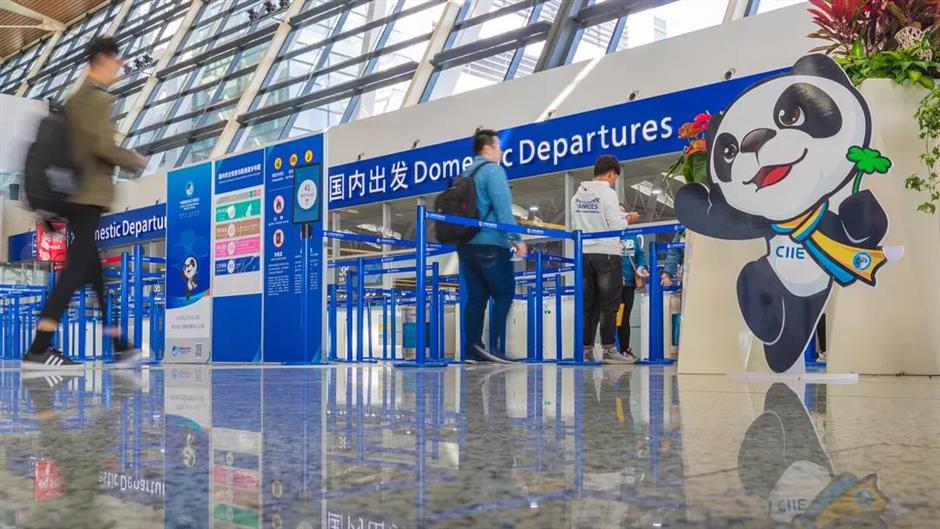 The terminal buildings at both airports are redecorated to feature Jinbao, the expo mascot, and miniature traditional Chinese gardens. 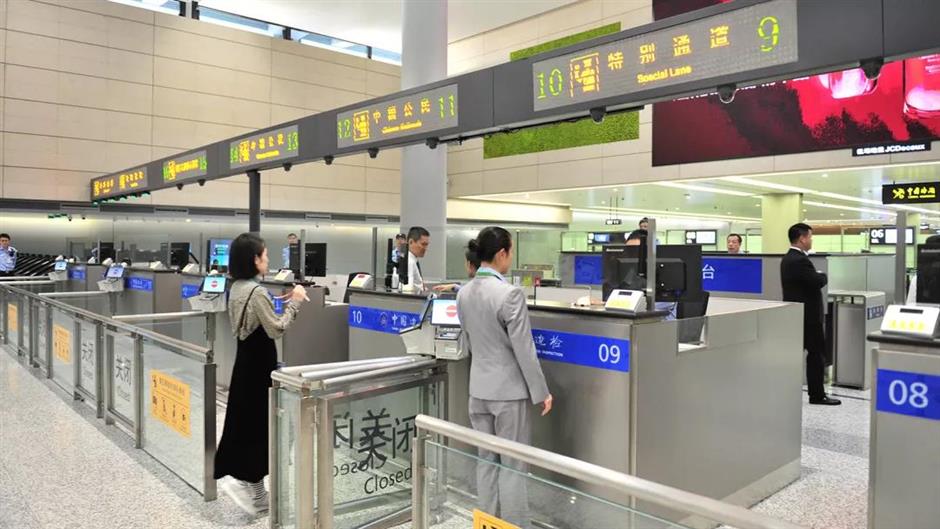 Delegations to the CIIE enjoy preferential services in customs clearance, immigration inspection, security checks and luggage claim through green channels at both airports.

The cargo terminal at the Pudong airport handled 38 percent more exhibit items and cargo for the second CIIE compared with 2018. A total of 126.5 tons of goods were transported to the CIIE through the terminal.

Delegations to the CIIE enjoyed preferential services in customs clearance, immigration inspection, security checks and luggage claim through green channels at both airports.

Four CIIE service centers were also set up at the Pudong airport, while another two were installed at Hongqiao. The centers offered consulting and business services as well as showcased the city’s image to delegations and travelers. 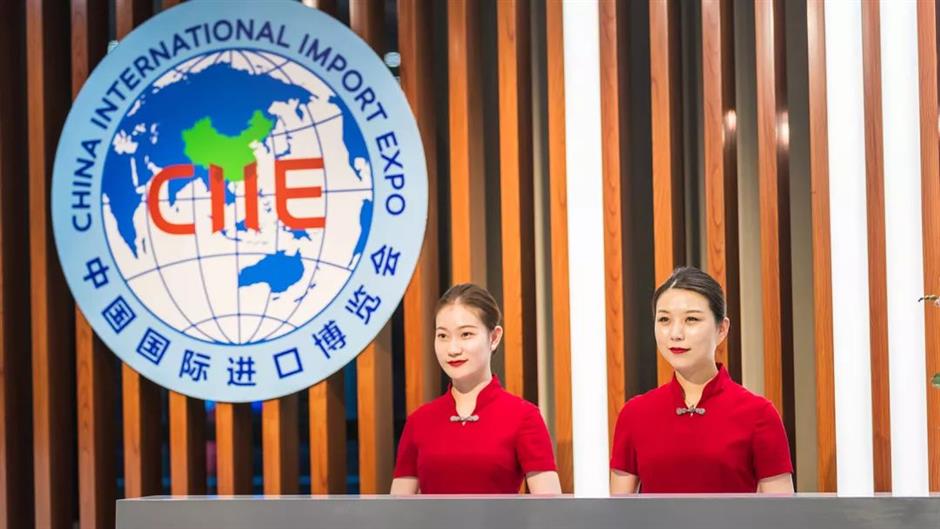 Two service staff at one of the six specialized service centers for CIIE participants and travelers at both airports. 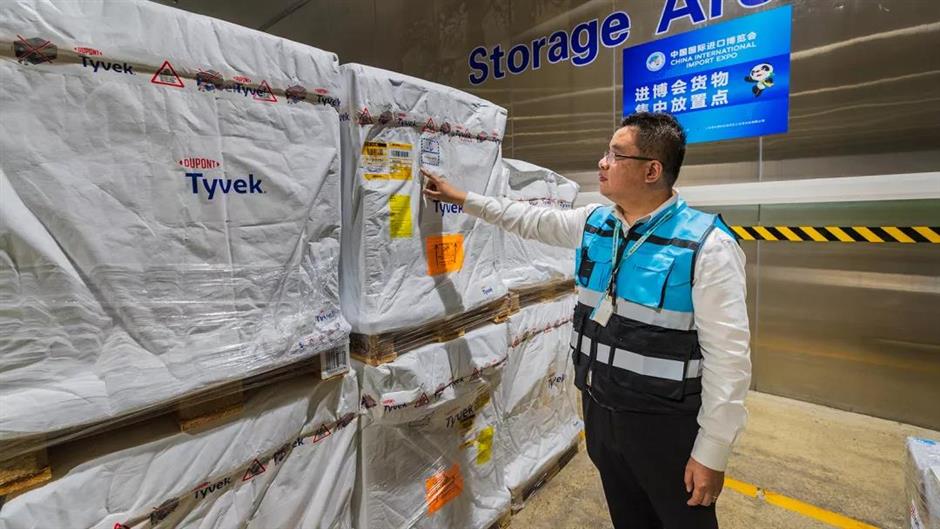 A staff member at the cargo terminal at the Pudong airport checks a shipment of materials for the CIIE. 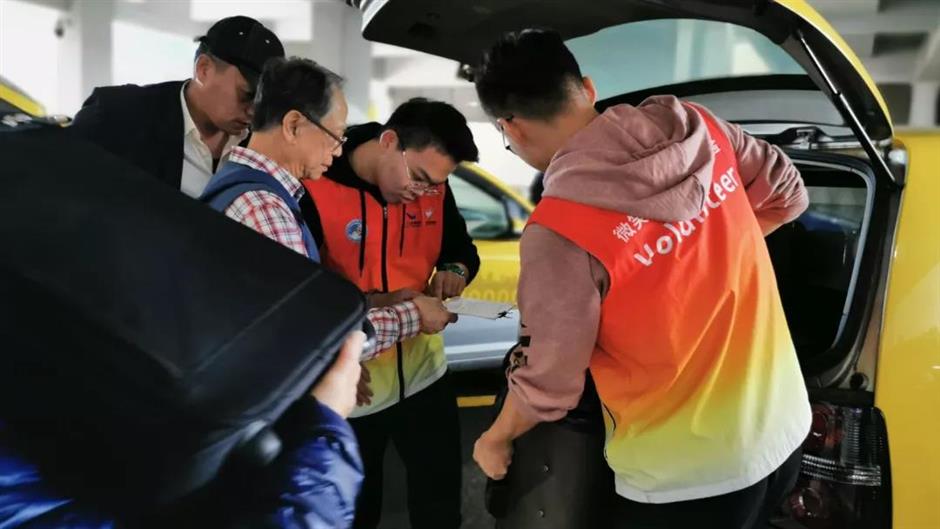 Volunteers help travelers lift luggage into a taxi at the Hongqiao airport.