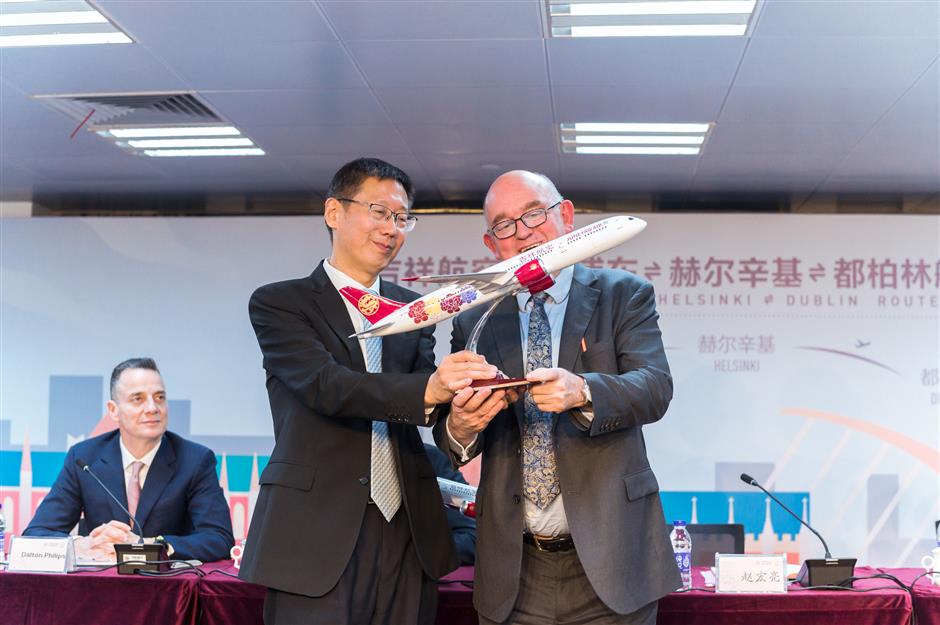 Eoin O'Leary, the Irish ambassador to China, receives a model of a Boeing 787 Dreamliner from Zhao Hongliang, president of Juneyao Airlines, after the announcement of a new flight between Shanghai and Dublin.

Two new flights between Shanghai and Dublin and Reykjavik will begin in March next year to cater for the rising demand of travelers between Europe and China.

Both routes will be operated by the airline’s Boeing 787-9 Dreamliner aircraft with a short stop in Helsinki on each leg. The airline can also sell tickets for travel between Dublin/Reykjavik and Helsinki, the carrier announced on Wednesday.

The two routes mark the acceleration of Juneyao's ambition to expand to the European travel market. It opened a daily direct flight to Helsinki in June this year while announcing two other routes to Athens and Manchester.

China has become the world’s largest outbound travel market with 149.72 million outbound trips last year, a 14.7 percent increase on year. The airline expects that figure to reach 178.4 million by 2022.

Meanwhile, 30.54 million overseas travelers made trips to China in 2018, with Europeans accounting for 12.5 percent.

Juneyao operates over 160 domestic and international flights with 73 Airbus 320s and Boeing 787s. It is the first connecting partner with Star Alliance and has announced a cross-shareholding partnership with China Eastern Airlines to strengthen their positions in Shanghai.