Visitors look at some exhibits on display at the Sao Paulo Jewish Museum.

It was organized by the museum and the Shanghai Jewish Refugees Museum.

Around 100 people attended the opening ceremony, including officials from the Chinese Consulate General in Sao Paulo, representatives of the Sao Paulo government, former Jewish refugees in Shanghai and their families and local citizens.

The exhibition documents the period when around 23,000 Jewish people arrived in Shanghai to escape the Nazis during World War II.

It features photographs depicting former refugees, personal stories of survivors and their families and historical artifacts. 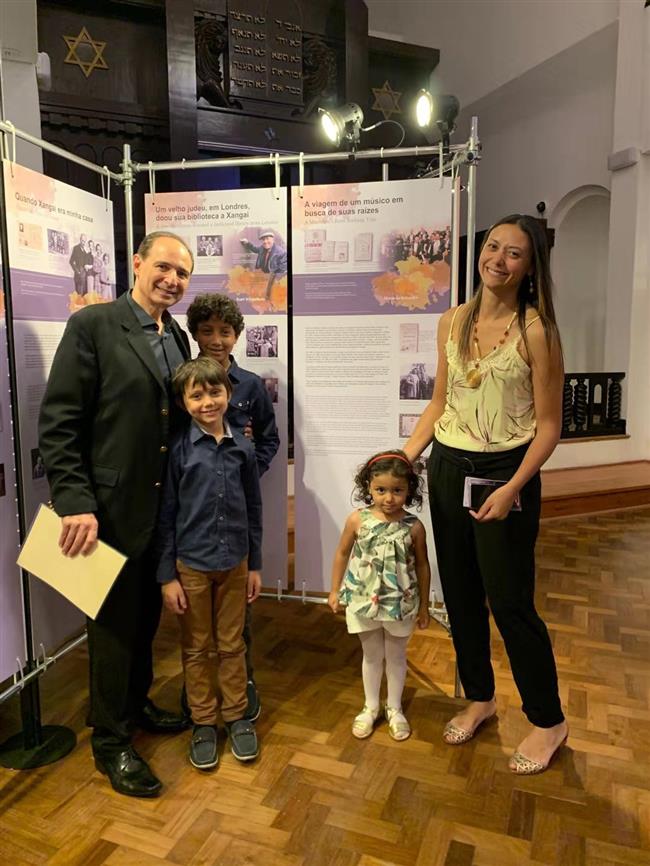 Horacio Schaefer (left), a descendant of former refugees who lived in Shanghai, donated family items to the Shanghai Jewish Refugees Museum at the opening ceremony in Sao Paulo.

Horacio Schaefer, the 64-year-old principal violist with the Sao Paulo Symphony Orchestra, donated family items that included a Chinese-style marriage certificate, a nurse training certificate and a permit of residence to the Shanghai museum at the opening ceremony.

“These old items should not be only belong to a single family, they should belong in Shanghai, and the world,” Schaefer said.

His parents had lived in Shanghai between 1939 and 1949 and he was in the city in February to visit the museum and trace his family roots when the orchestra held its premiere at the Shanghai Grand Theater for their China tour.

He was delighted to find the names of his parents among the 13,732 names listed in the "Wall of Shanghai Jewish Refugees."

“The exhibition shows the goodness and inclusiveness of the Chinese people,” Chen Peijie, China's consul general in Sao Paulo, said during her speech at the ceremony. “It helps us to cherish today's hard-won peace and the peaceful, collaborative environment for development in the world. Looking back to this period of history will also help us to reflect on building a community with a shared future for mankind.”

The exhibition is one of the “charming Shanghai” activities launched by the Shanghai government to showcase today's city and urban life to Sao Paulo residents.