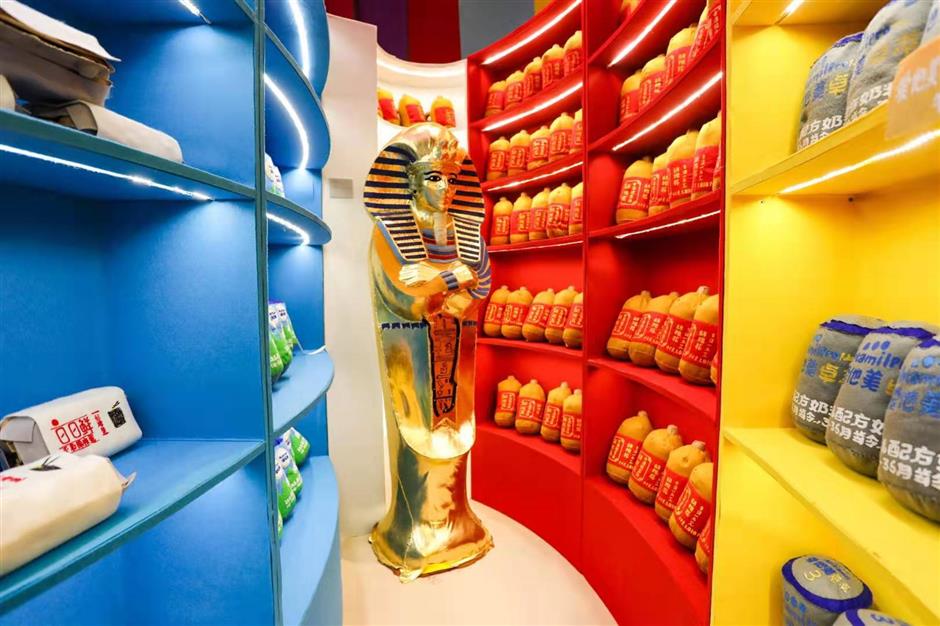 A series of art exhibitions and events have added some artistic bounce to the commercial road of Nanjing Road W.

Redic’s “Shanghai Chapters” exhibition will run through December 8 at the century-old Cha House, an exceptional example of the fusion of Chinese and Western architectural styles.

The three-floor structure was built in 1920 as home for brothers Qiu Xinshan and Qiu Weiqing, two paint industry tycoons. In 2010, it was rolled 57 meters on rail tracks from 412 Weihai Road to 420 Weihai Road.

After eight years of renovation, it has been restored to its original, century-old beauty. It reopened to the public in 2018.

The exhibition “Pow ! Art ! Mart!,” which will run through December 1 at the HKRI Taikoo Hui, features delicacies of lobster, crab and watermelon -- all made of felt.

Meanwhile, artist Lucy Sparrow has designed a treasure hunt for visitors. In a giant maze, she has installed elements related to world renowned artworks, such as the Mona Lisa and terracotta warriors. Visitors are given clues to find them. 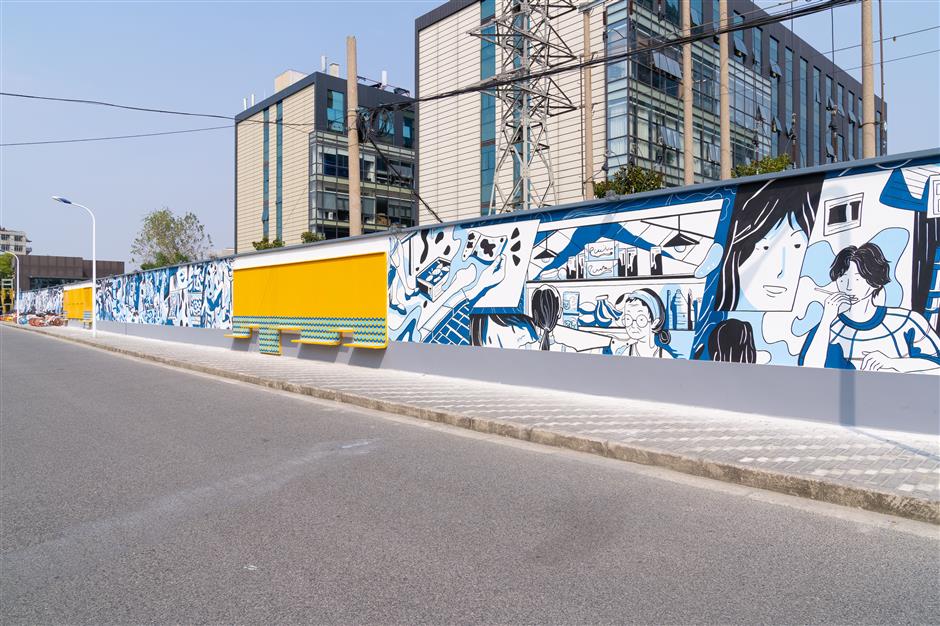 Art installations and paintings by young artists have reshaped the 1,800-meter-long riverside of the Pengyuepu River.

Though December 27, 14 art installations will be on display as part of the city's biennial Urban Space Art Season. Many of them are old items discarded by local people.

In one of the installations, over a dozen of chairs made from recyclable materials such as cloth and bamboo are placed on the waterfront. Another exhibit includes a row of mailboxes, with old-school telephones, phonographs and other vintage commodities displayed.

A 750-meter-long wall has been turned to a “storybook” filled with paintings and graffiti retelling local history.

The Pengyuepu River was once a heavily polluted waterway, filled with illegal structures. A rehabilitation program that started in 2017 razed illegal buildings. A greenbelt was built on the waterfront. Once the overhaul was completed, the river was selected by citizens as one of the most beautiful in the city in 2018.

Representatives from Salvador, Tunisia and Antigua and Barbuda visited the outlet of the 350-year-old Lei Yun Shang pharmacy on the Shaanxi Road N. during the second China International Import Expo earlier this month.

They sampled traditional Chinese herb tea and experienced “robot doctors” that scan facial complexions and do tongue diagnosis. Some of them said they were very impressed by the magic of traditional medicine and bought remedies while there.

The pharmacy’s gift box, combing an acupoint comb and a bottle of essential oil, was chosen as an official gift to foreign guests during the import expo. 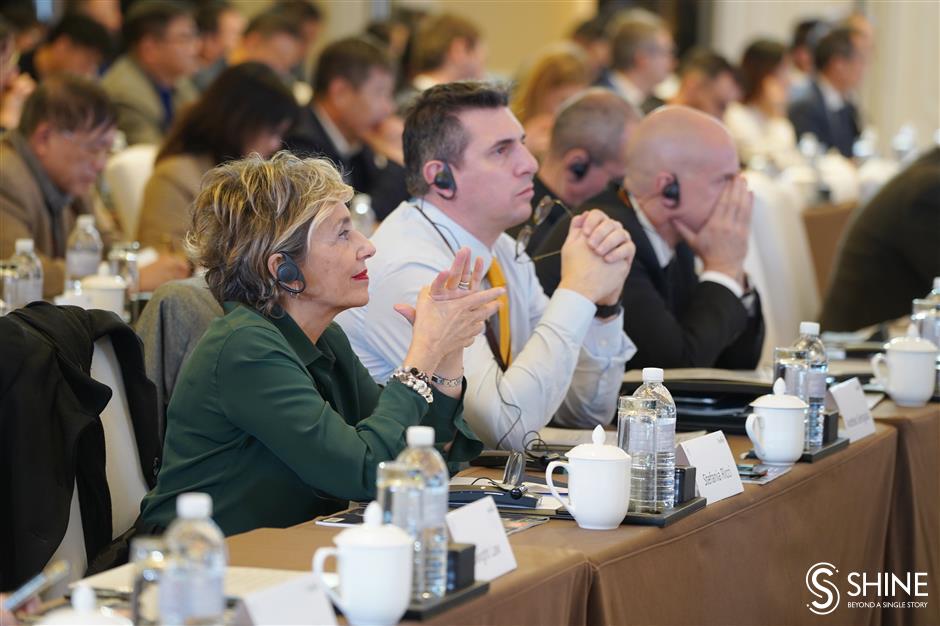 An evaluation system for international commercial districts was unveiled at the 2019 Forbes China Jing’an Nanjing Road Forum held on Wednesday.

It says that a top commercial district should offer a high-quality shopping experience that aggregates a variety of businesses, introduces new brands and holds events combining culture and commerce.

Such a district should incorporate local tastes and interests, presented in people-friendly settings.

The Internet of Things can be an important tool in providing convenience to customers, according to the evaluation system led by Lu Xiongwen, head of the School of Management of Fudan University.

Jing’an has introduced more than 2,000 domestic and foreign brands, with many luxury retailers choosing the district for flagship stores. The district is also seeking to establish ties with the world’s renowned commercial streets.

“We went to Milan in September, where we signed agreements in fashion, art and culture,” said Yu Yong, director of Jing’an.

The west bank of the Xisitang River has become the latest popular rendezvous for local people after one-year facelift.

“I dared not open a window because of the strong odor,” said resident surnamed Cheng. Another surnamed Qin said, “Previously, there were no lights at night, and I would never go out after 10pm.”

Increasing complaints finally reached the ears of local officials, and the campaign to clean the river and improve the environment started in the latter half of 2018. Illegal structures were pulled down and the river cleaned up.

Trees and flowers were planted. New handrails, ground tiles and bridges were built, and a new drainage system was installed.

There is now a corridor with cherry trees along the riverside, which will create a romantic setting every spring when the flowers come into blossom. Handrails and a giant fish-like installation have been installed, with automated lighting to dispel the dark of night.

Currently, the west bank has become popular among local people, who stroll there, chat and enjoy the new views. Young people come to take photos and post them on social media.

“Previously, I had to go to the Lingnan Park to do morning exercises,” said resident Lu Yanmin. “But now we are happy that we can walk, dance and do sports on our doorstep.”