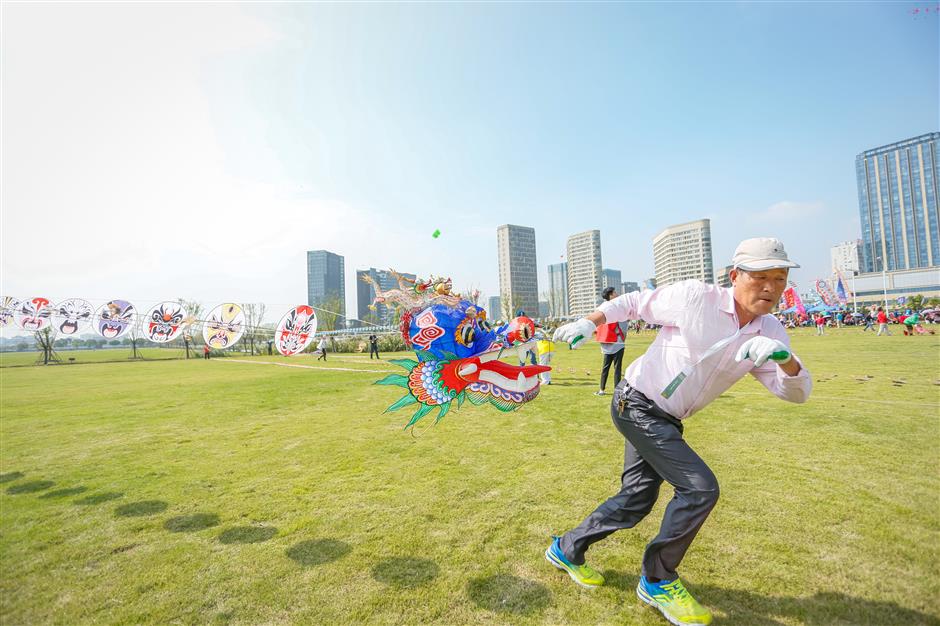 A kite runner flies a dragon-shaped kite during a kite-flying competition in Songjiang in mid-October. 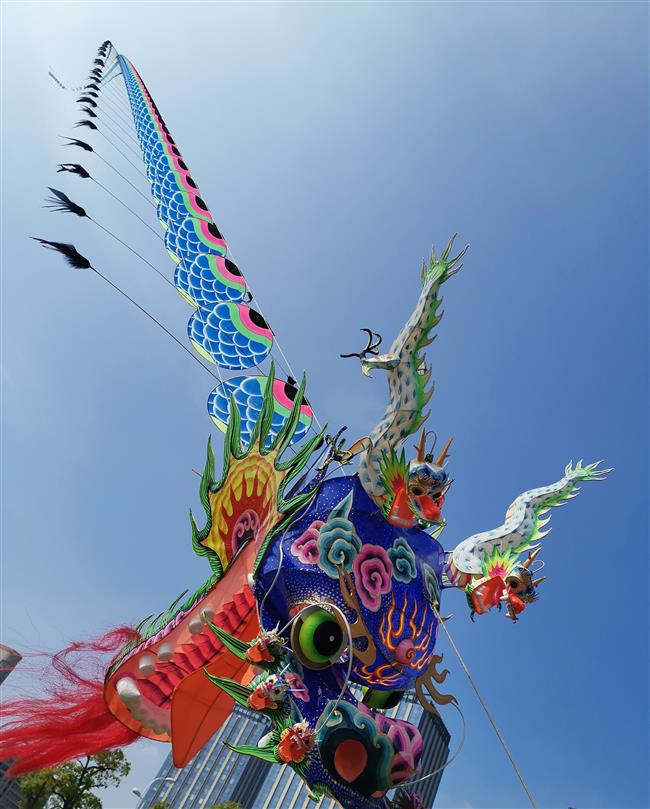 A dragon-shaped kite runs vertical to the horizon.

Nearly 1,000 kites of different colors and shapes decorated the sky above the 130,000-square-meter grassland of Songjiang New City International EBD on October 12 and 13.

The kite-flying competition, in celebration of the 70th anniversary of the founding of the People’s Republic of China and to encourage development of the G60 High-tech Corridor, saw 135 kite runners from 27 kite-flying teams taking part.

The competitors were from 15 cities and seven districts in Shanghai and Jiangsu, Zhejiang and Anhui provinces in the Yangtze River Delta region.

The event, which had 13 competitive categories, was the biggest kite-flying competition this year.

As a tradition favored by Songjiang people since ancient times, the event attracted more than a thousand kite-flying lovers as spectators.

As early as 8:30am before the opening ceremony, 27 kites in the shape of birds, fish, beasts, vegetables and fruits were flown in the sky as a warm-up.

After the opening ceremony, 25 dragon-shaped kites, all of them hand-made, leapt into the sky. The kites, running vertical to the horizon, required excellent kite-running skills. Among them one kite extended more than 200 square meters. It weighed 80 kilograms and demanded the cooperation of more than 20 people.

In addition, 26 kites equipped with LED lights displayed 3D visual effects on the night of October 12.

Kite flying in China originated in the Spring and Autumn Period (475-221 BC) and the four most renowned kite-making areas in China are Nantong in Jiangsu Province, Weifang in Shandong Province, Beijing and Tianjin, according to experts.

“To judge a kite, we need to see how it is made and painted, if there is any innovation and how it flies in the sky. The Nantong kites usually have whistles attached to them. So observers can not only see the beautiful kites, but also listen to how they whistle,” said an expert from Jiangsu Kite Flying Association.

Thirteen national-level and eight local referees took part in the competition, according to Kang Weidong, chief referee of the kite-flying competition.