Cards reward for talent in Baoshan

Across the city, districts are offering services designed to attract talent as part of the city's efforts to optimize its business environment.

They range from housing and household permits to medical services and fitness, movie watching and match-making.

An upgraded talent card will be released on Friday in north Baoshan District.

Named after the district's famous cherry flower, the first batch of gold and silver “cherry blossom cards” will be granted to 80 professionals in Gaojing and Yanghang towns.

Holders can enjoy over 30 kinds of preferential services in finance, scientific innovation, startup services, fitness, cinema, health and senior care. They can enjoy green channels at hospitals in Baoshan and also use VIP channels at the city's cruise liner terminal in the district.

The district government departments will offer tailored and timely services to scientists, for instance, who are dedicated to work and have little time to spend with their families. Registration, financial, training and counseling services will be offered mainly to outstanding entrepreneurs.

The gold and silver cards, which can be issued by subdistricts, townships and industrial parks, will mainly include conveniences such as public canteens, shuttle buses and after-school care for children, said Qian Jianfeng, an official with the district's talent service center.

Previously, 22 outstanding professionals who made great contributions to the district’s development became the first group to receive the higher level diamond and platinum cherry blossom cards early this year.

Apart from the preferential services, specialized service staff answers their phone calls around the clock to solve all kinds of difficulties for them.

The practice is part of Baoshan government’s efforts to better serve and allure high-end professionals while optimizing its business environment, according to the district government.

More talent cards will be released to about 500 professionals across Baoshan and nearly 10,000 excellent employees at innovation parks and startup firms based in the district, according to the center. The scheme will be initially promoted to the district's robotics industry park, one of Baoshan's major industries. 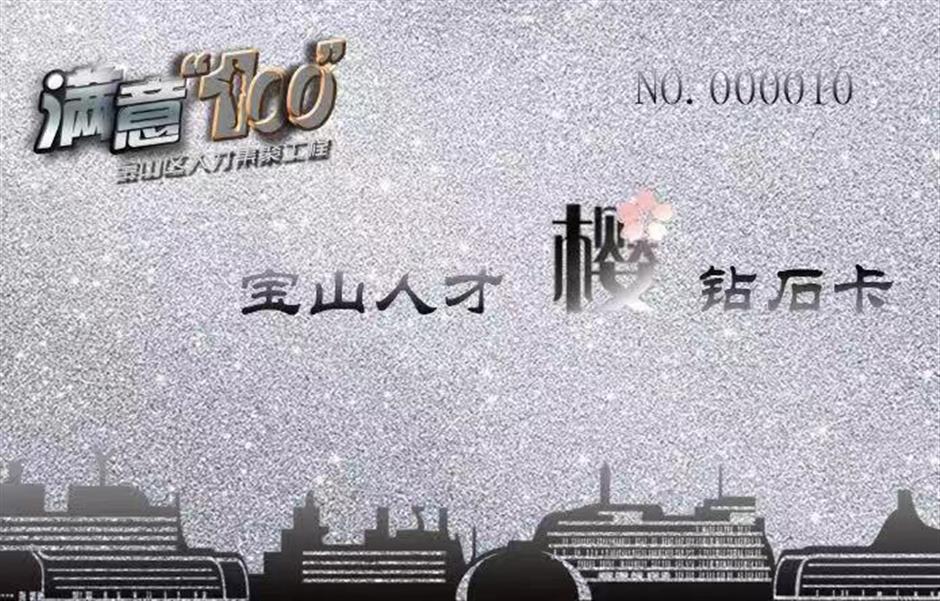