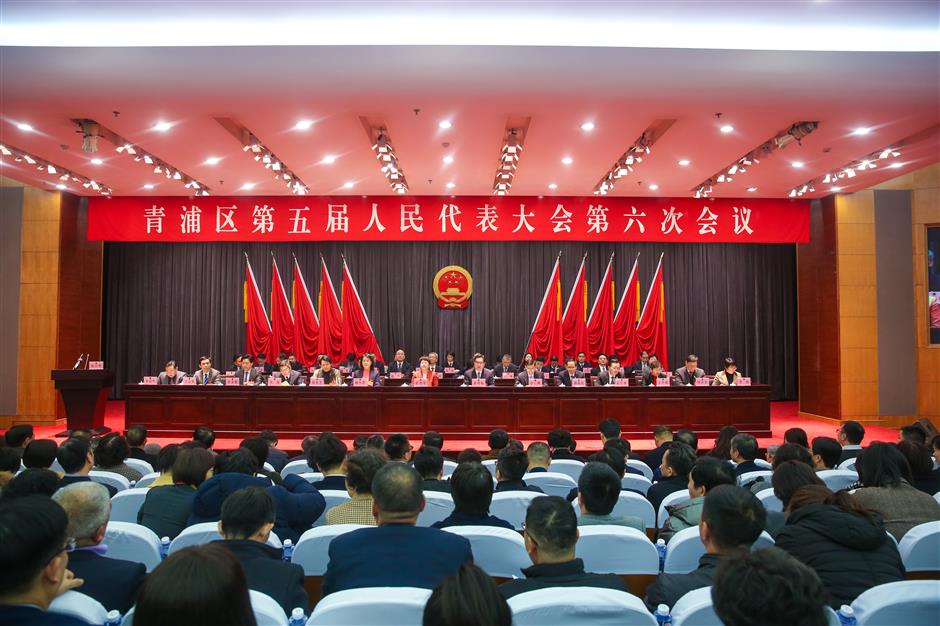 Qingpu District's GDP is expected to rise by 6 percent in 2020 and the aim is that its residents' per-capita disposable income will be even higher, the district government said on Wednesday.

The district's economic and environmental targets for 2020 were announced at the annual meetings of the district-level Chinese People's Political Consultative Conference and the People's Congress, which began on Tuesday and Wednesday respectively.

The construction of city-level ecological corridors, such as the Qingsong corridor, will be completed this year and the district's per capita green space will reach 10 square meters compared with 9.5 square meters at present.

Greenery in the district will be 42 percent this year compared with 41.55 percent at present with forest coverage of 18 percent.

Yu said the strictest ecological management and control will be imposed at the towns of Zhujiajiao, Jinze and Liantang and anti-pollution campaigns in areas such as the Dianshan Lake, Yuandang and Taipu Lake will be stepped up.

The environmental treatment of key river courses such as Xinyi and Xintanggang will start this year, and the goal is to eliminate inferior class-V water, the district government said.

The west extension project of the Songze Elevated Road, which links Qingpu with downtown Shanghai, will be accelerated this year, as will construction of the south extension of Caoying Road and Shengli Road, Fuxing Road and Qingpu Avenue.

The Xiayang Subdistrict is expected to become Shanghai's "beautiful block" this year, and the facelift project of urban villages in the district will be promoted.

Construction of the Dianshan Lake Welfare Institute is due to be completed this year, and the renovation of 640,000 square meters of old residential complexes is also on the agenda.

Construction of the Qingpu branch of the Obstetrics & Gynecology Hospital of Fudan University will be accelerated, and 10 villages in the district will apply to be city-level model villages with beautiful countryside.

The district will also promote the science and technology innovation plus industry cluster development in the Xicen area with finance industrial parks built, and improve commercial service facilities at Metro stations on Line 17.

It also aims to promote industrial upgrading, with 300 items of industrial structure adjustment on the agenda, and expand the scope of online government affairs applications to improve efficiency.

Intelligent projects involving e-government cloud and data exchange and a smart city management platform will be constructed, and 1,000 new 5G base stations will be built.

Its total contract value of foreign investment hit US$1.4 billion and paid-in value of the district's foreign investment reached US$800 million in 2019, both record highs. Residents’ per-capita disposable income was estimated at 51,500 yuan, a rise of 8.8 percent from the previous year and above average for the city.