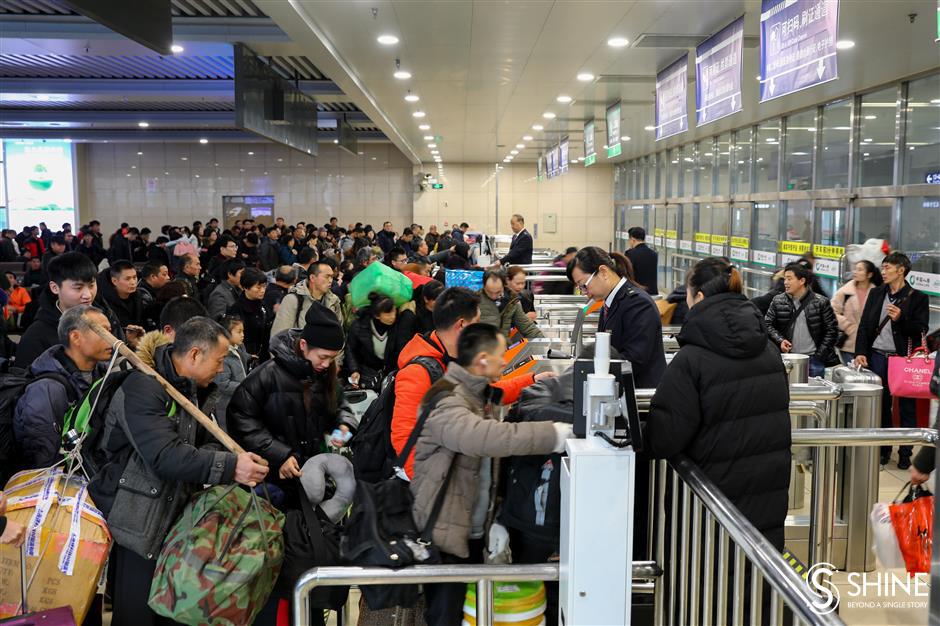 Passengers have their tickets checked at the Shanghai Railway Station on Friday. 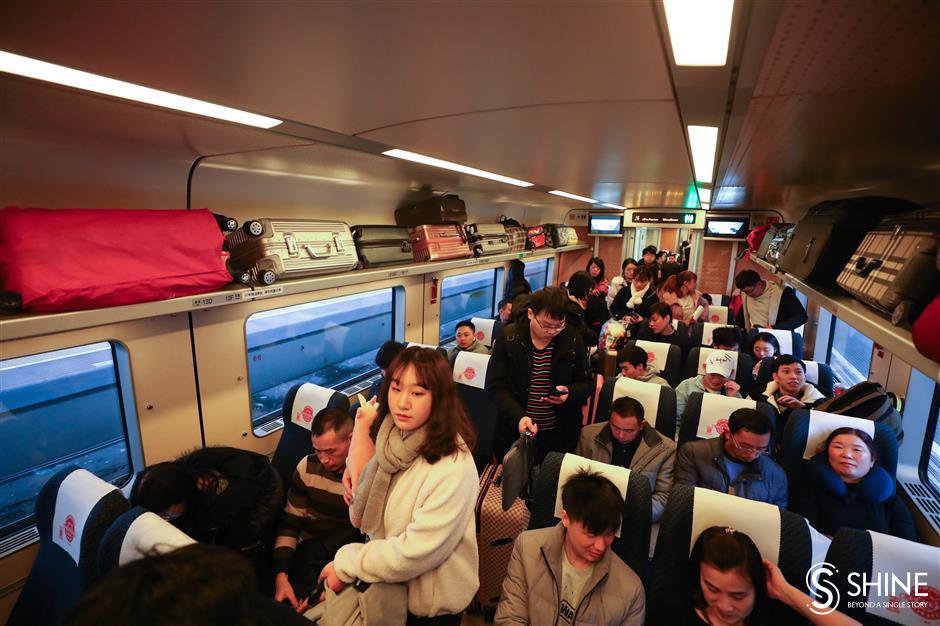 Passengers on board a train to Nanjing, neighboring Jiangsu Province.

The annual Spring Festival holiday travel rush, known as chunyun, started on Friday, when about 390,000 passengers embarked on home-bound trips from Shanghai, about 100,000 more than usual.

Twenty-seven extra trains to Yunnan, Guizhou and Sichuan provinces, as well as Chongqing, were arranged on Friday to cope with heavy passenger traffic and more will be scheduled depending on demand, rail authorities said. 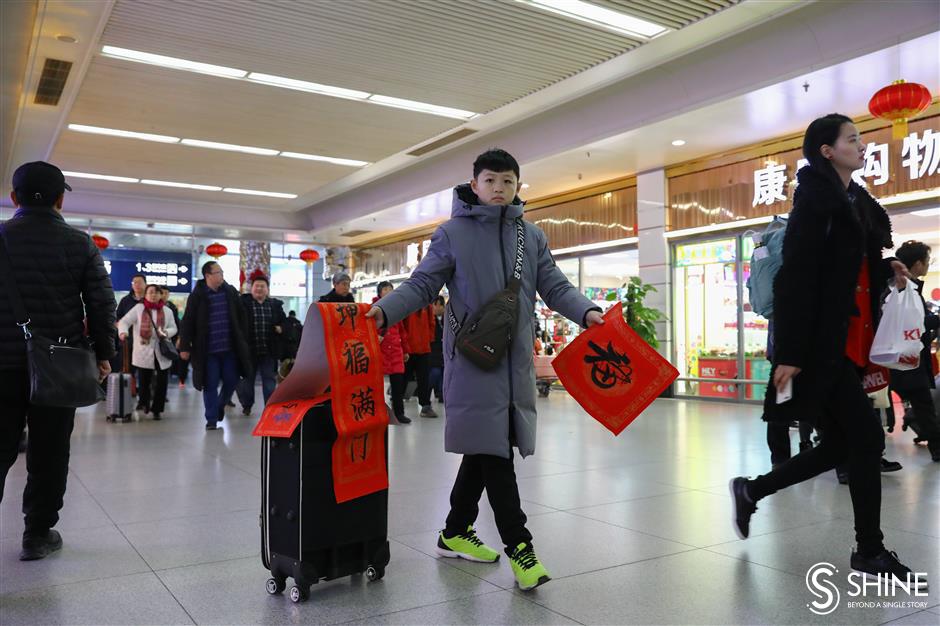 "I felt the festive atmosphere upon entering the railway station. This is the first time that I have received couplets, which makes me happy," said Li Xiaoxiao at the Shanghai Railway Station in Jing'an District. Her destination is Suzhou, neighboring Jiangsu Province.

The couplets were written by about 30 students from four schools in Shanghai.

"I have been in Shanghai for one year and I did not return home last year," said Shen Chang from Luoyang City, central China's Henan Province. "I really miss my parents back home."

Shen works in the electronics industry in Shanghai. It took him two days to buy a ticket online, and now he will spend more than a day on the train to get home, but thinking about his family will make the trip bearable.

Shen said he has prepared some Shanghai specialties and food for his parent as gifts.

"I work in the catering industry in Shanghai and I am happy to return home about 10 days earlier than last year's festival," said Chen Jing, from Xiangcheng City in Henan.

"I have been in Shanghai for some 10 years and seldom return home, even for Chinese New Year’s Eve dinner," she said. "My parents have moved to Shanghai while my grandparents are still in our hometown."

"This year I want to accompany them for the festival," she said. "I am happy that my boss approved my annual leave." 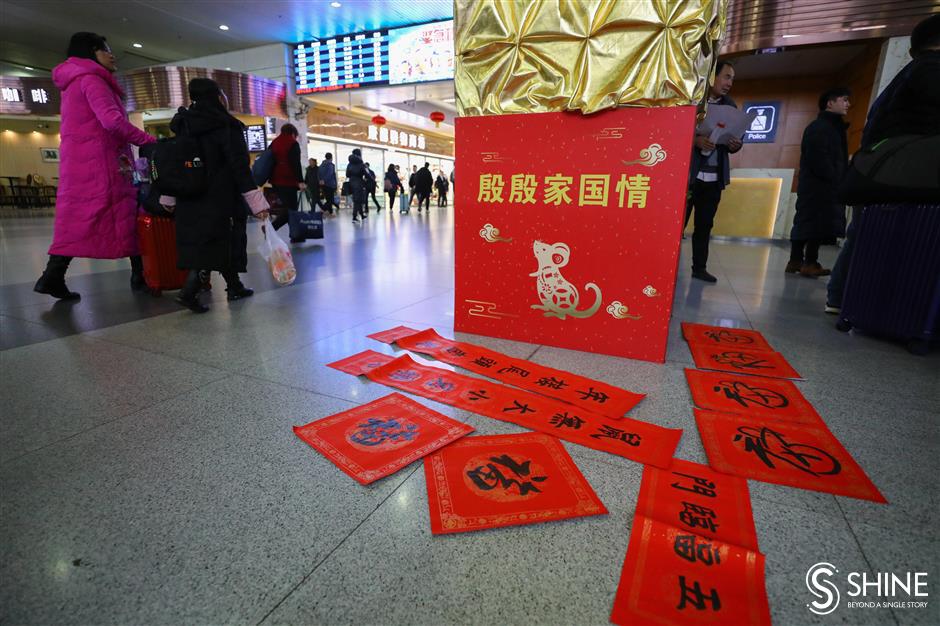 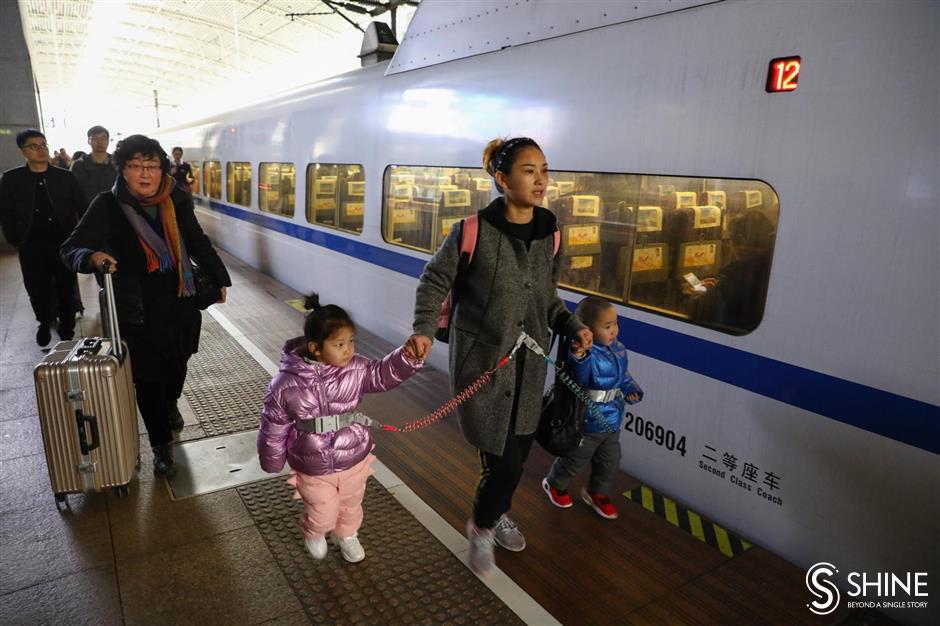 Passengers are ready to board the train.