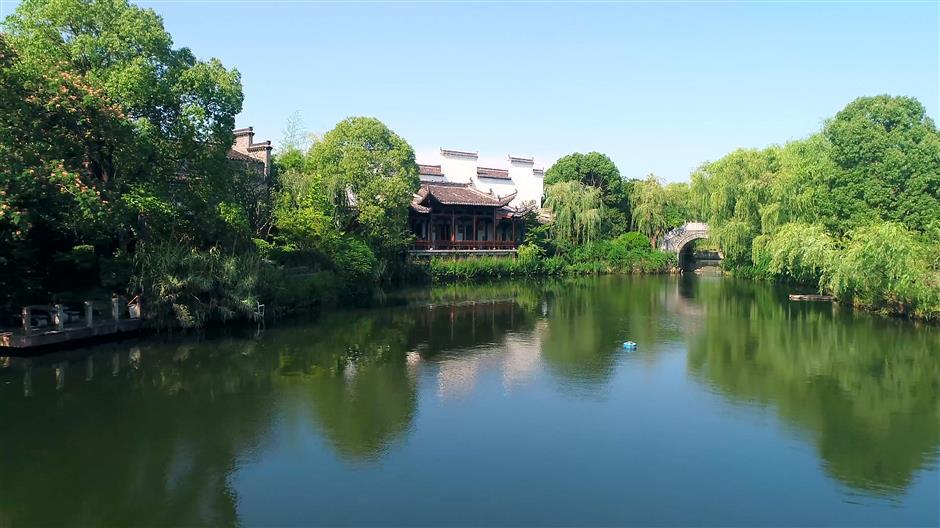 As urbanization encroaches on traditional villages, a local garden in north Baoshan District is protecting the architectural heritage of the Yangtze River Delta region.

Wendao Garden in Shanghai's 700-year-old Luodian Town features over 20 preserved Huizhou-style houses relocated from Anhui Province. These include Zhuangyuan Mansion, dating back to 1790, as well as the Diaohua Mansion, fearing exquisite wooden patterns built during the Emperor Qianlong era (1711-99).

The 400,000-square-meter park also contains a large swathe of ancient arches, pavilions and ornamental stone engravings. Among them, the Yongji Bridge was initially built in 1840.

Since its official opening in 2001, it has received over a million visitors from both home and abroad. The garden has also been listed as a 4A tourist attraction.

The number of heritage structures in the park is still growing, as many dismantled historical buildings from Anhui villages are waiting to be restored according to their original designs.

An architecture salon was recently held in the park for experts, historians and collectors to share knowledge and opinions on the protection of ancient houses.

Wang Wei, owner of the park, spent nearly two decades to collecting, restoring and transporting decaying parts of historic houses to Shanghai and reassembled them according to three-dimensional scanning data.

Wooden structures and bricks from over 100 old Huizhou-style houses have been collected. Most of these parts are still being stored in the park and waiting for restoration. 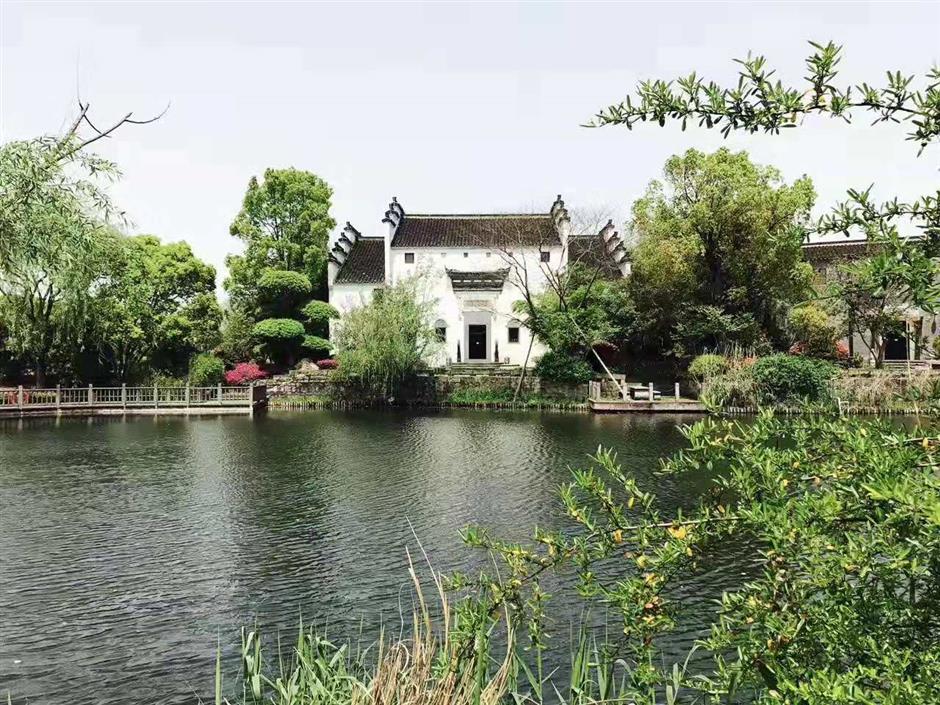 A restored Huizhou-style building in the Wendao Garden in Baoshan District.

Each pillar was marked with a serial number and underwent insect- and mold-resistance treatment. For missing parts, Wang looked for replacements from other ancient villages with similar architectural styles, he told the salon.

His collection includes original materials from a Ming Dynasty (1368-1644) house belonging to a senior cadre, a wooden house once home to a Ming academy and an ancestral hall dating back to the Qing Dynasty (1644-1911).

Wang started his campaign to preserve and collect historical buildings over 20 years ago, when he visited an ancient village in Anhui with his friends. Some delicate ancient structures caught his attention, but they were rotting and damaged due to lack of maintenance.

Some owners even used old buildings to raise pigs or silkworms. Many beautiful wooden patterns were discarded or destroyed by villagers.

Wang decided to invest his savings to purchase and salvage these structures.

The 20 structures restored in the Wendao Garden are opening to visitors as innovation and culture centers, a tea house, a Zen hall as well as art galleries.

Though the garden attracts a relatively small number of daily visitors compared with its downtown counterparts, artists often hold gatherings or exhibit their works in its historic buildings.

Tea-tasting and studying Taoism are also popular in the garden due to its distance from the clamor of the city. 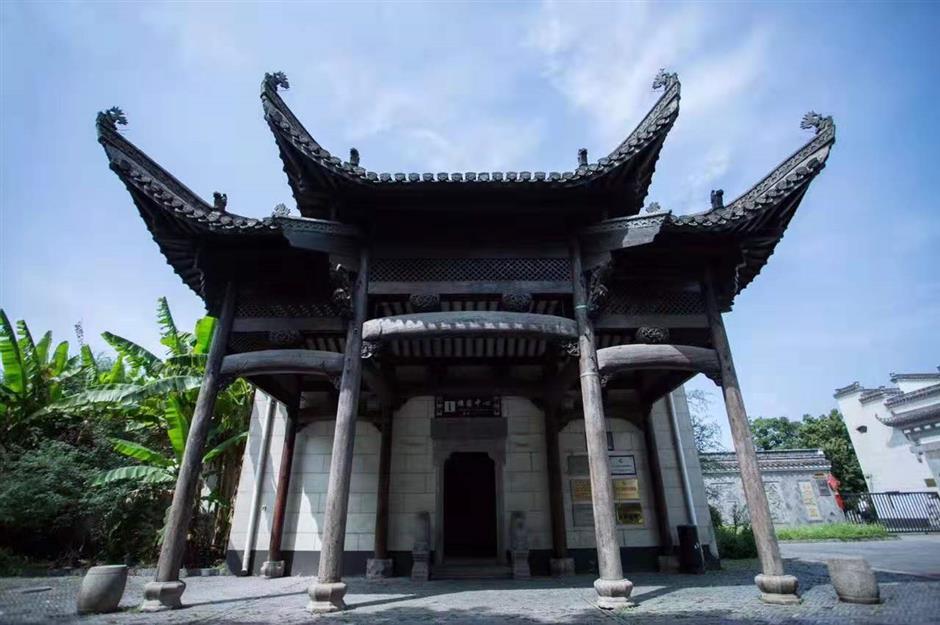 A restored Huizhou-style building within the Wendao Garden in Baoshan District.

Notable sights include a garden hall, inherited from 54 generations of descendants of Zhuge Liang, a chancellor of the state of Shu Kindom during the Three Kingdoms Period (AD 220-280), and the "chastity arch" built during Emperor Wanli's reign (1563-1620) in the Ming Dynasty.

Ruan Yisan, an expert on the protection of historical buildings and a professor at Tongji University, said such rebuilding methods are an acceptable solution when there is no better way to protect the structures on their original site.

"Architectural materials must be carefully dismantled and marked with numbers on each brick and tile," Ruan said.

Ruan is well known for once standing between a bulldozer and a historic building. He guided the protection on many popular ancient towns across China such as Pingyao in north Shanxi Province, Lijiang in southwest Yunnan and Zhouzhuang in neighboring Jiangsu Province.

Wang next plans to restore more heritage buildings from original materials piled up in a warehouse at the garden. Some old wooden materials are decaying again despite protective measures, Wang said.

"If the materials are damaged again, the buildings might never be restored," Wang said. Ruan suggested a better storage environment with stable temperature and humidity. 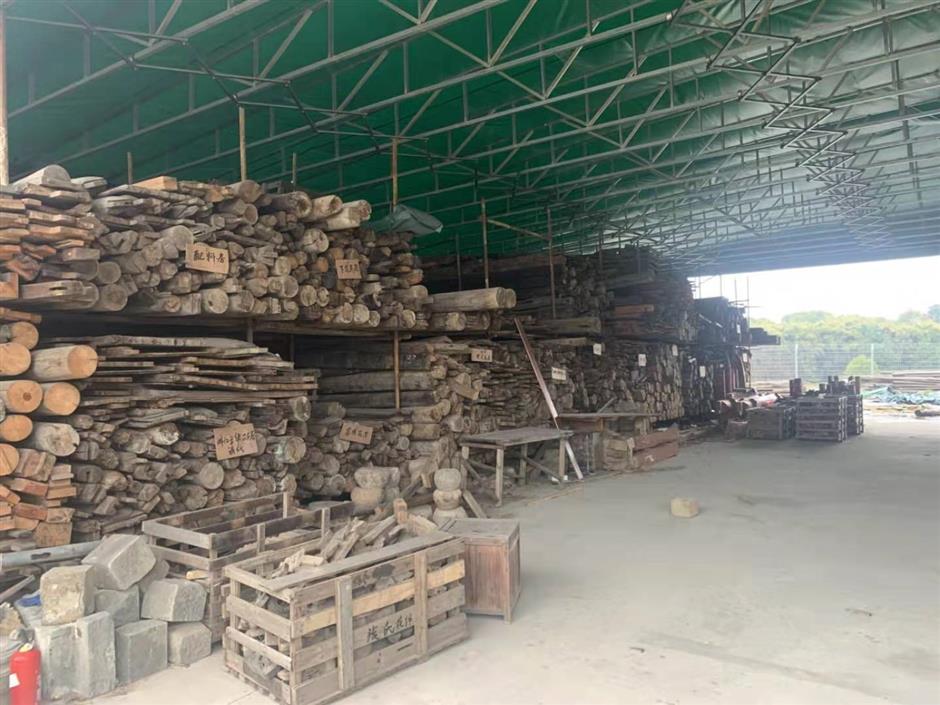 Wooden pillars from dismantled houses in Anhui Province are piled up in the warehouse of Wendao Garden, waiting to get restored.