Putuo District has launched an innovative scheme to appoint a district director and senior officials as investment promotion staff to further improve the region’s business environment.

“The district’s officials are familiar with the fields they take responsibility and can coordinate different government departments to solve problems for the companies more efficiently,” said Li Gang, director of Putuo’s investment promotion office.

The specialized teams focus on quality foreign investment and the district’s key industries, such as intelligent software, research and development service and fintech. Application procedures have been further streamlined for enterprises with reduction on materials and time. Some companies can even finish registrations online, according to the district government.

Jiang Dongdong, acting director of Putuo, said the investment promotion and optimizing business environment are the top agenda for the Putuo government. Ten companies signed contracts with the district’s investment promotion office, finance office and Taopu Smart City to base their businesses in Putuo on January 3.

Rhenus Automotive, a renowned German vehicle investment company, is among those who inked contracts with Putuo. The hi-tech firm’s clients include global brands such as BMW, Rolls-Royce and Mercedes Benz. The district’s investment promotion team visited the headquarters of the German company in June 2019. After rounds of negotiation, the company finally decided to register its Chinese businesses in Putuo.

The startup firm established in 2008 has had nearly 200 education institutes. As it seeks further expansion, the long application process for each new school became a major bottleneck for its development.

The investment promotion team coordinated the education and industry and commerce authorities to open a one-stop application window at the city’s education commission for the company. The application for 50 new schools across the city can be finished within a year. 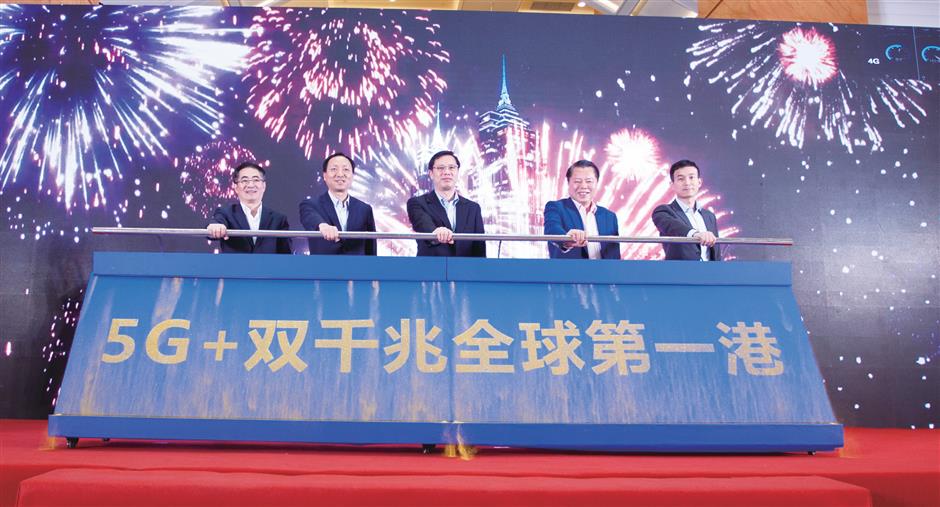 Government officials unveil the district’s 5G program at the Global Harbor Mall to kick off a new round of applications based on 5G technology.

Meanwhile, government officials have unveil the district’s 5G program at the Global Harbor Mall to kick off a new round of applications based on 5G technology. The aim is to improve the residents’ convenience, enjoyment and safety.

The 25 applications cover 11 fields such as shopping, traffic, garbage sorting and medical services. Over 700 5G base stations have been installed to cover the district.

At the Global Harbor Mall, a major site for Putuo to promote 5G, unmanned cleaning vehicles sweep the floors and collect garbage across the city’s largest shopping complex.

A “facial emotion recognition system” can analyze customers’ preferences so sales staff can offer tailored services. Robots patrol the mall to ensure safety, as well as guide drivers to find their cars in parking garages.