Express workers enjoy special holiday delivery of their own 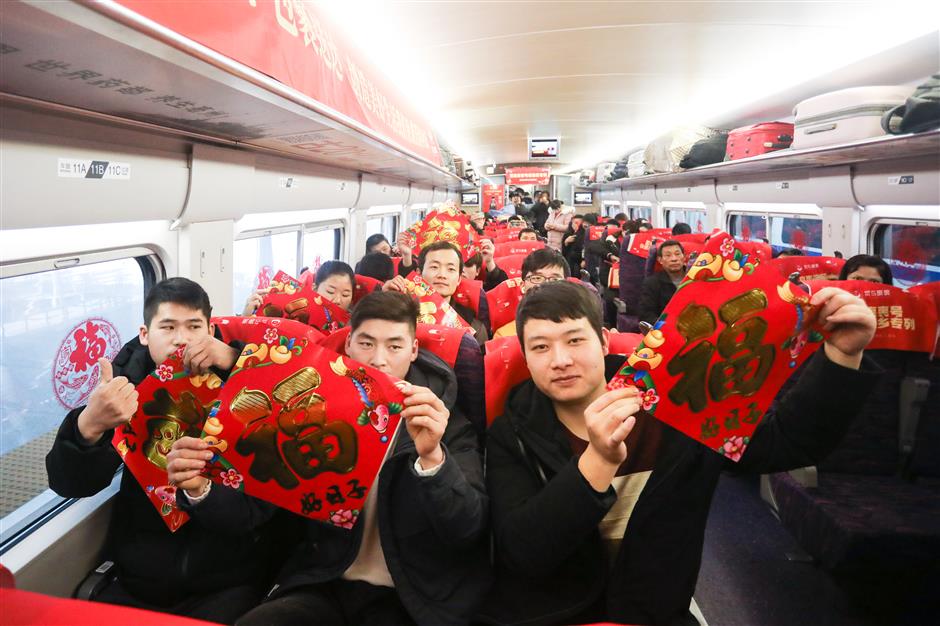 Delivery workers embark on the journey home for Spring Festival. 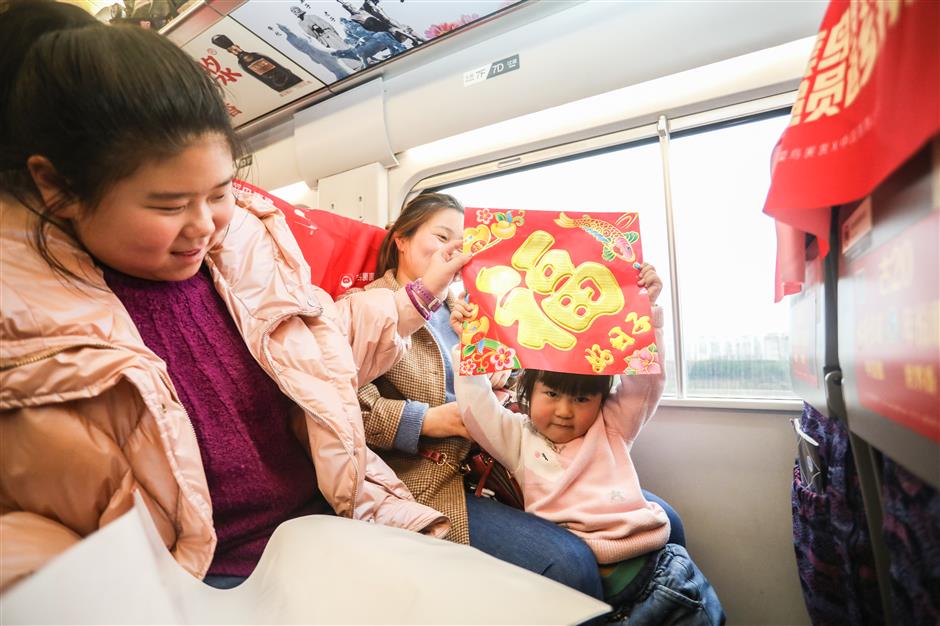 A high-speed train carrying more than 400 express delivery workers back home ahead of the upcoming Spring Festival departed from Shanghai Hongqiao Railway Station on Thursday afternoon.

The ride is free and passengers are from delivery companies such as ZTO Express, YTO Express, STO Express, Yunda and Best Express, together with their family members. The trip is sponsored by Alibaba’s logistics affiliate Cainiao Network and jointly launched by the Shanghai branch of China Railway.

The train's destination is Bozhou South Station, in east China's Anhui Province, from whence hail many of Shanghai's delivery personnel.

"The hard work of delivery staff makes life more convenient, and we hope they can enjoy a happy New Year with their families," said Yu Hongwei, deputy director of the Shanghai Postal Administration.

Zheng Changbing, a courier with STO Express, has been in Shanghai for over 20 years since he left his home in Shouxian County, Anhui Province, as a teenager.

A former construction worker, he started working as an express deliveryman in 2004. He delivers parcels in the Wujiaochang area of Yangpu District.

"I live alone in Shanghai and my wife and son are in the hometown for his studies," said Zheng.

"Because of busy work, I can only return home during big festivals and I'm very homesick," he said.

He usually takes long-distance buses back to his family, and the trip can take over 10 hours.

This time, he'll arrive home just in time for dinner on Thursday.

"Last year, I failed to secure a ticket and had to take my friend's car back home," said Yang Weifeng, a Henan Province native.

"I'm happy to have a much easier and faster journey, which takes only four hours by train this time," he said.

Yang will board a bus in Bozhou to complete his homeward journey.

"It's even harder for express delivery workers to grab tickets for family reunions during the Spring Festival, because the period before the festival is the busiest time of the year for them," said Zhang Lu with Cainiao Network, who is leading the project.

"The destination is Anhui Province; based on our big data analysis we found that the percentage of delivery workers from Anhui is high," he said.

"It's very difficult to secure a ticket home and I could not believe it when I heard the news," said Guo Shouzhong, a courier with Yunda in his 30s.

"My children and wife are waiting for me, and I cannot wait to return," the Anhui native said.

He plans to return to Shanghai on January 31.

"Last year, it took me three days to grab a ticket and the train was a slow one," said Jiang Xiaoshuai whose destination is Bozhou. "This year, I am really excited to return home in such a convenient way."

He has been in Shanghai for two years and delivers parcels in Yangpu District. Living alone in Shanghai, he has not been home for the whole year.

"I miss my parents and they are waiting for me at home," he said.

"I am busy at work, and have no time to queue to buy tickets, and online purchasing is also difficult," said Jiang Xiugui, from Fuyang City of Anhui.

"The timing is perfect to have a dinner with my parents upon arrival, and this is the first time I've enjoyed the 'free shipping' treatment," he said.

The Spring Festival holiday, a traditional time for family reunions, runs from January 24 to 30 this year, although the holiday travel rush, known as chunyun, lasts about 40 days starting from January 10. 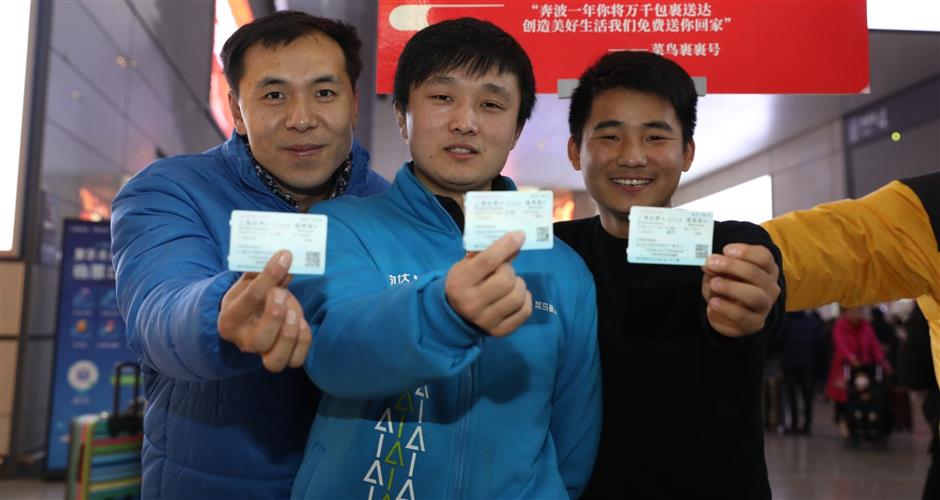 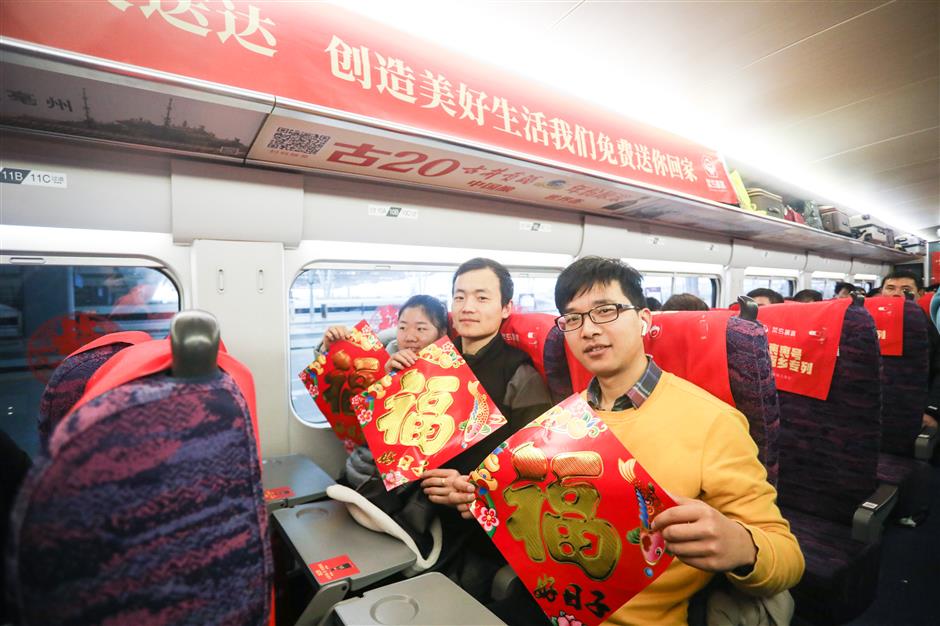