To my daughter, clay figures crafted in love

People often think of a father’s love as aloof and implicit, but that’s not the case with Xu Shihuan, a resident in Huacao Town. His love for his daughter is obvious and unreserved.

Xu has a roomful of light clay figurines he has made for his first-grade daughter Yifan, ranging from characters in Chinese folk stories to protagonists in the latest cartoons.

Xu, who studied arts and crafts, became a father in 2013 and decided to make some toys for her on his own.

He chose light clay because it is clean and safe to use. He decides on the shape of characters by whatever strikes his daughter’s fancy or by things happening in their lives.

“I search online for the images of a certain character and then bring it to life,” Xu said.

Currently Yifan is smitten with Mickey Mouse and Donald Duck, so the two feature prominently in Xu’s toymaking. On her birthday, he combined a music box singing “Happy Birthday” with Snow White and a row of Mickey Mouse figures.

When a popular cartoon “Ne Zha,” the adaptation of a traditional myth, was popular last year, Xu made a series of the cartoon hero in several sizes.

“I took her to watch the film, and she could tell the story was a bit different from the original folk tale that has been told for hundreds of years,” Xu said.

Yifan, now starting primary school, is sheltered from the usual pressure parents place on children to be high academic achievers. The only after-class lesson she attends is English, which enthuses her because she loves the British cartoon series “Peppa Pig.”

Unlike many children, Yifan is not consumed by the digital world. She likes a variety of things, like cars and sports. She even joined a children’s football team where she is the only girl. At bedtime, her father reads to her from one of her favorite books, the Chinese classic “Journey to the West.”

Xu’s toys are more than just mere playthings. They are sometimes educational and thought-provoking.

Last year when Shanghai implemented new garbage-sorting regulations, Xu created four thumb-sized trash cans from clay, each with a label specifying wet, dry, recyclable or hazardous trash. He even added a little device at the bottoms so that they could be moved around.

To emphasize the importance of environmental protection, Xu stuffs leftover clay into the cores of figurines and uses bottle lids, foam and other waste in his works.

A dumpling-making series of figures showed his daughter how a dumpling is made. He used different colors to show dumplings made from different vegetables.

All the pieces have big smiles and each has its own story to tell. Like how crops are grown.

“Nowadays people live removed from farmland, and children don’t know how our food arrives on the dinner table,” Xu said.

Xu puts a lot of thought into the figurines. The largest piece he has made to date is an arm’s-length transformer with compound pieces and magnets buried inside for the sections to be assembled or taken apart. 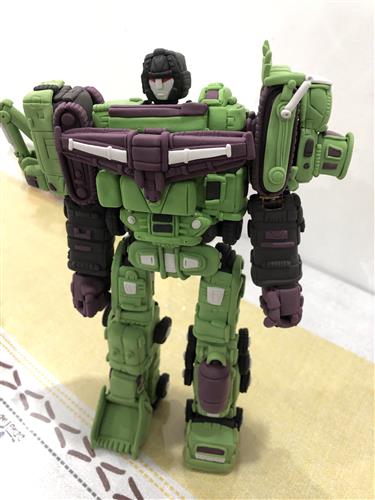 When Yifan was younger, she always asked her father to make a figurine for her if something caught her attention. Now she is asking him to teach her how to make one.

Last Christmas, Yifan made a clay figurine of Santa Claus in a school handicrafts class. She brought it home to her father as a gift. Xu cherishes it.

Xu’s expertise in making light clay figurines has gone beyond home. Each week, especially during summer school holidays, he gives free lessons to children at the district’s mass art gallery or museum.

His goal is for children to have fun while learning. He incorporates local culture into the lessons, like the heritage of the ancient Maqiao people who once populated Minhang. He teaches step-by-step and has even found a way to attach QR code to a finished work so the students can scan and replay the steps in case they forget them.

Noticing that many parents stayed to observe his classes, he added classic comic characters from their own childhoods, like Doraemon and Dragon Ball.

“This way they can share with their children their own childhood memories,” Xu said.

Xu has refused all suggestions that he initiate paid lessons in his handicraft.

“Going into a business means chasing profits,” he said. “Working on a nonprofit basis relieves me of all that pressure. Everyone is happy, and that’s enough for me.”