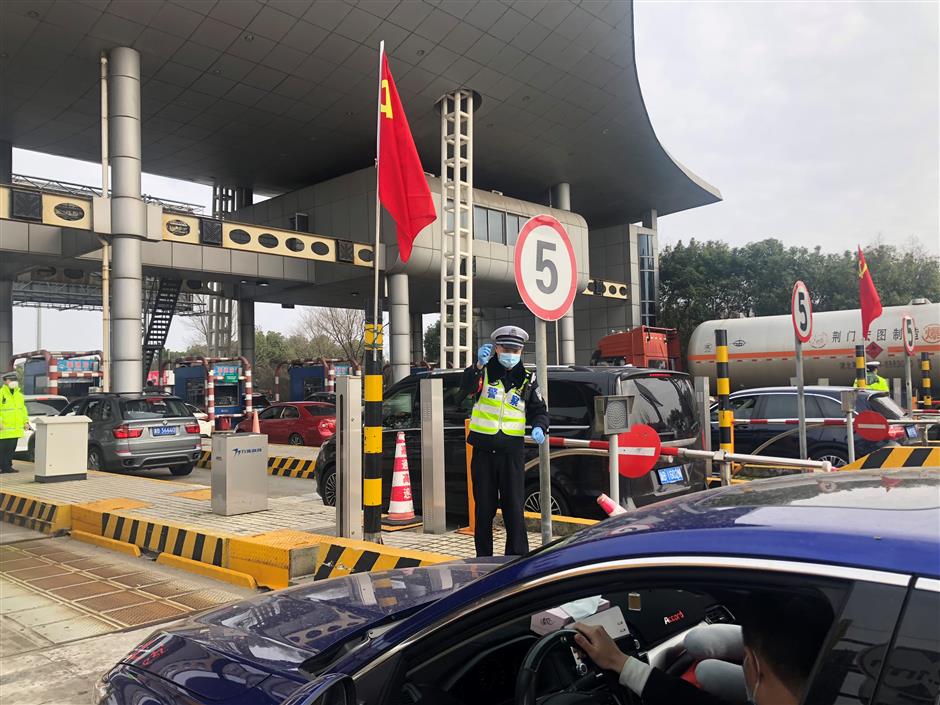 Li Binjie, director of the Shanghai-Zhejiang police checkpoint on G15 Expressway in Jinshan District, works at a tollgate.

Since all people who enter Shanghai via expressways now have to complete a health statement form via a mobile app, besides having their temperatures checked, congestion at entrances to Shanghai could be horrendous, but police have taken measures to address the situation.

At some checkpoints, staff have started to distribute cards with the QR code for the app to motorists waiting in traffic and advise them to fill out the form before going through temperature screening.

Li Binjie, director of Shanghai-Zhejiang police checkpoint on the G15 Expressway in Jinshan District, said this measure is more than necessary.

“On peak days, about 10,000 vehicles go through this checkpoint, and if everyone finishes the health statement once they reach the station, probably only 120 vehicles could pass per hour,” he said.

Li also asked the company in charge of maintenance along that part of the expressway to put up signs with the app's QR code starting 4 kilometers ahead of the checkpoint.

As a result of these measures, the time each vehicle spends going through the checkpoint has been reduced to under 1 minute, Li said.

“During peak hours, over 600 vehicles can pass the check station per hour, and the queues are usually under 1.8 kilometers,” he said.

Yu Bin, director of the Chongqi Bridge police checkpoint on the G40 Expressway in Chongming District, stands on duty.

It's the same situation at the Chongqi Bridge police checkpoint on the G40 Expressway in Chongming District.

According to Yu Bin, director of the checkpoint, it took only 15 seconds for a vehicle to pass before the health statement form was introduced, but after that it took 3 to 5 minutes, which created a massive burden on the busy expressway.

At Yu’s suggestion, workers added two lanes in the direction from Jiangsu Province to Shanghai to enable more vehicles to undergo checking at the same time. Also, his staff have started to hand out papers with the QR code of the app at 200 meters ahead of the checkpoint.

Moreover, Yu noticed that Internet speeds slowed when many people filled out the health declaration form at the same time. The problem was later solved with the assistance of telecom operators.

“Before, the number of vehicles passing this checkpoint per hour was under 100, but now we have 300,” Yu said.

Since January 22, about 3 million people in 1.6 million vehicles have been checked, with 1,148 people transported to collective quarantine sites and 408 handed over to hospitals for having high temperatures, Shanghai police said.

Meanwhile, about 800 vehicles with people from key epidemic areas were turned away from checkpoints, according to the police.