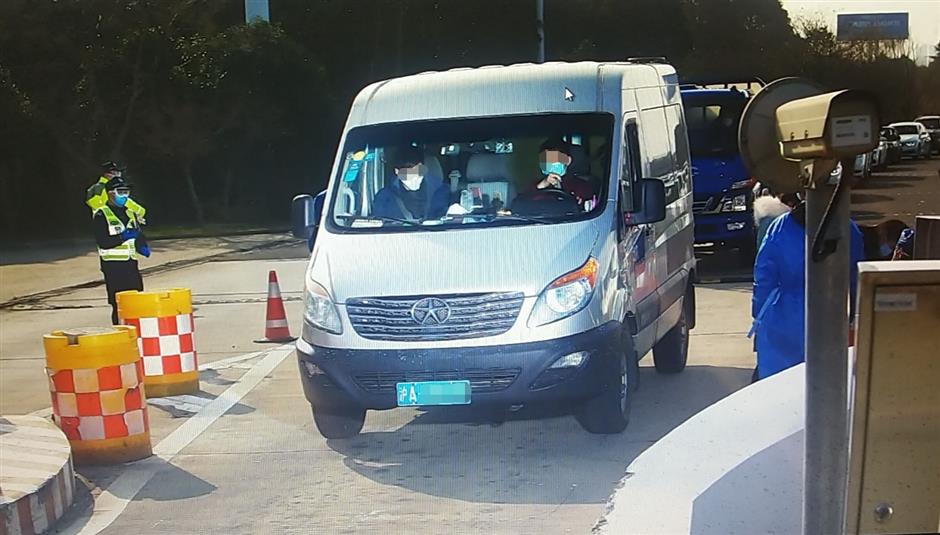 The van at a police checkpoint on the G50 Expressway in Shanghai on February 9.

A man from Wuhan who hitch-hiked to Shanghai is now under quarantine but has no symptoms of illness, Shanghai police said on Tuesday.

The 22-year-old man surnamed Liu, who has an identity card with the address of a university in Beijing, is said to have stopped a van with Shanghai plate at an expressway exit in Wuhan on February 8 asking for a lift, claiming he had to fly from Shanghai back to a foreign country where he was studying.

The driver, a 30-year-old man also surnamed Liu who was returning to Shanghai after transporting relief goods to the central Chinese city, agreed to give him a lift “out of compassion.”

Both signed a pledge to stay at home for 14 days.

The driver then took his passenger to an apartment in a residential complex on Liuying Road in Jing’an District, police said.

Liu reported himself to the residential committee the next morning, while the driver has also been under home quarantine. Up to now, Liu has no symptoms, according to the police.

Liu is under close monitoring by subdistrict staff and will be taken to hospital if he shows symptoms, police said.