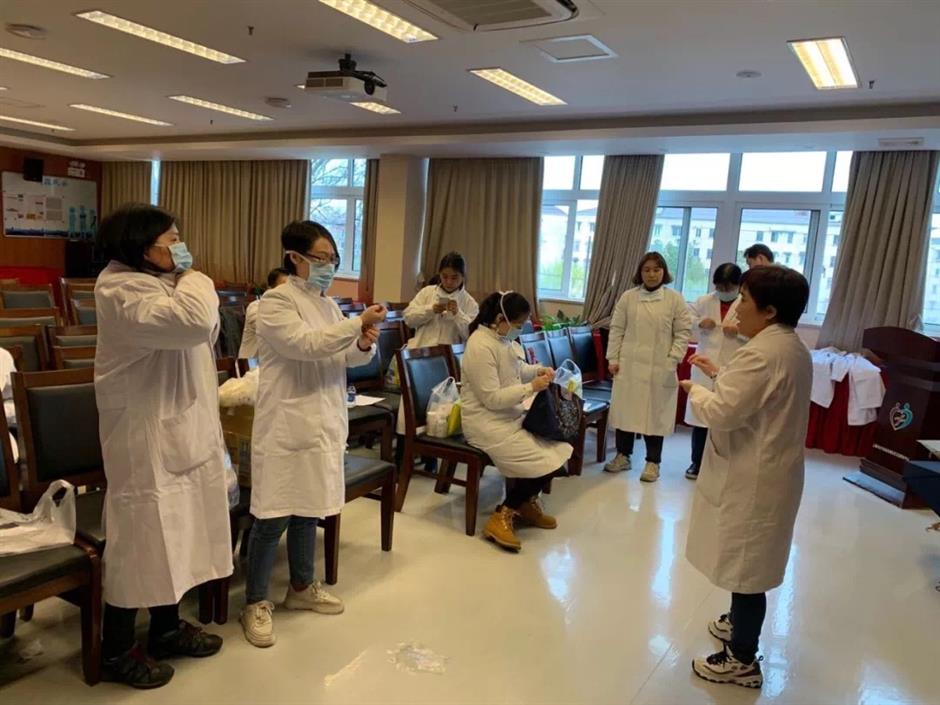 Lu Min (right), director of the disease control department with the community healthcare center in Xinjing Town of Changning District, guides other medical workers on how to wear protective gear.

The community healthcare center in Xinjing Town of Changning District is only 15 minutes' drive from Shanghai Hongqiao International Airport, which has imposed strict screening measures upon passengers on all flights to Shanghai.

Lu Min, director of the disease control department at the center, and her colleagues regularly take passengers from Hubei Province, the hardest-hit region of the novel coronavirus outbreak, to a designated hotel for 14-day observation.

They also provide care and do daily temperature checks to other quarantined people living in the hotel.

Lu voluntarily took over the risky task after Shanghai announced its highest-level response mechanism for major public health emergencies on January 24. She stayed in the quarantined hotel to handle emergencies and calm the residents.

A young woman appeared to be anxious when Lu and other medical staff checked her temperature. Lu called her afterwards and helped to ease her concerns.

"Some people feel chest pain and shortness of breath due to emotional stress, so psychological counseling is quite important," Lu said.

In thanks for her considerate services, a travel group leader from Hubei sent a gratitude card to Lu. "We sincerely thank the city government and medical staff. We hope you can also take care of yourself," the group leader writes.

About 100 people are under observation in isolation in the designated hotel. The center takes charge of coronavirus prevention at 33 neighborhood committees in the town, and has screened over 300 households. Among them, 150 people, who have no symptoms but once traveled to Hubei or were in contact with people from the coronavirus-hit region within 14 days, are being quarantined at home. 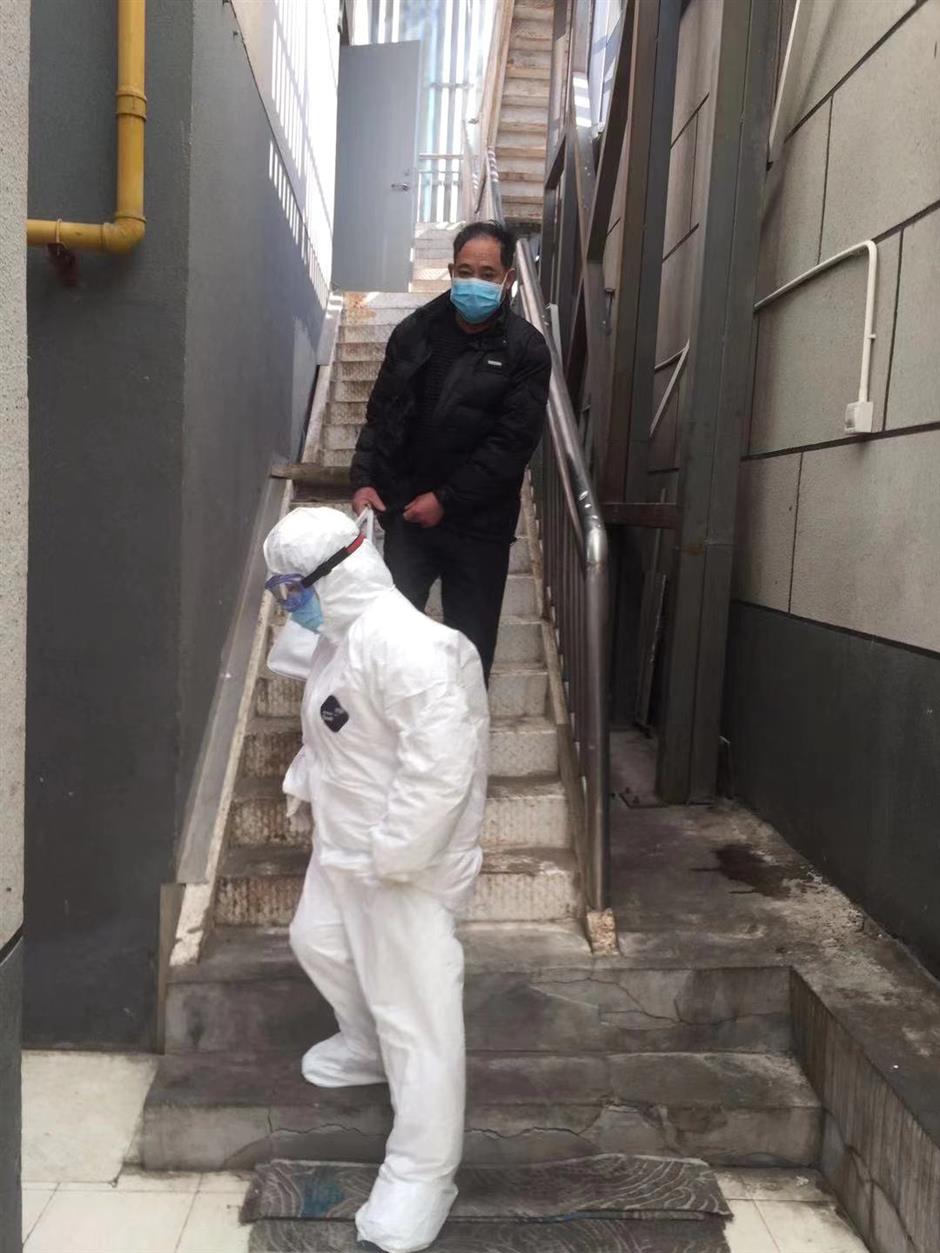 Cai Minqiang, leader of the general practitioner workshop of the center, has been screening each household since the beginning of the Spring Festival holiday with other medical staff.

A doctor and a nurse wearing proper protection interviewed each household about their travel routes and contacts in the last two weeks.

For those quarantined for observation at home, the teams check temperatures every day and send daily necessities.

The 55-year-old Cai took part in the prevention of the SARS outbreak in 2003. He applied to join the current coronavirus prevention campaign right after he heard of the mission.

"All garbage is handled the same as medical waste," Cai said.

The center collects all garbage for disinfection and hands it over to professional medical waste treatment companies, he added.

On January 26, Cai alone collected 24 kilograms of garbage from quarantined households in the community. The amount of daily waste is increasing with more people from Hubei being quarantined, according to the center.

"Though we have not rushed to the frontline in Wuhan, we're fighting against the disease at the front of local residents," Lu said. 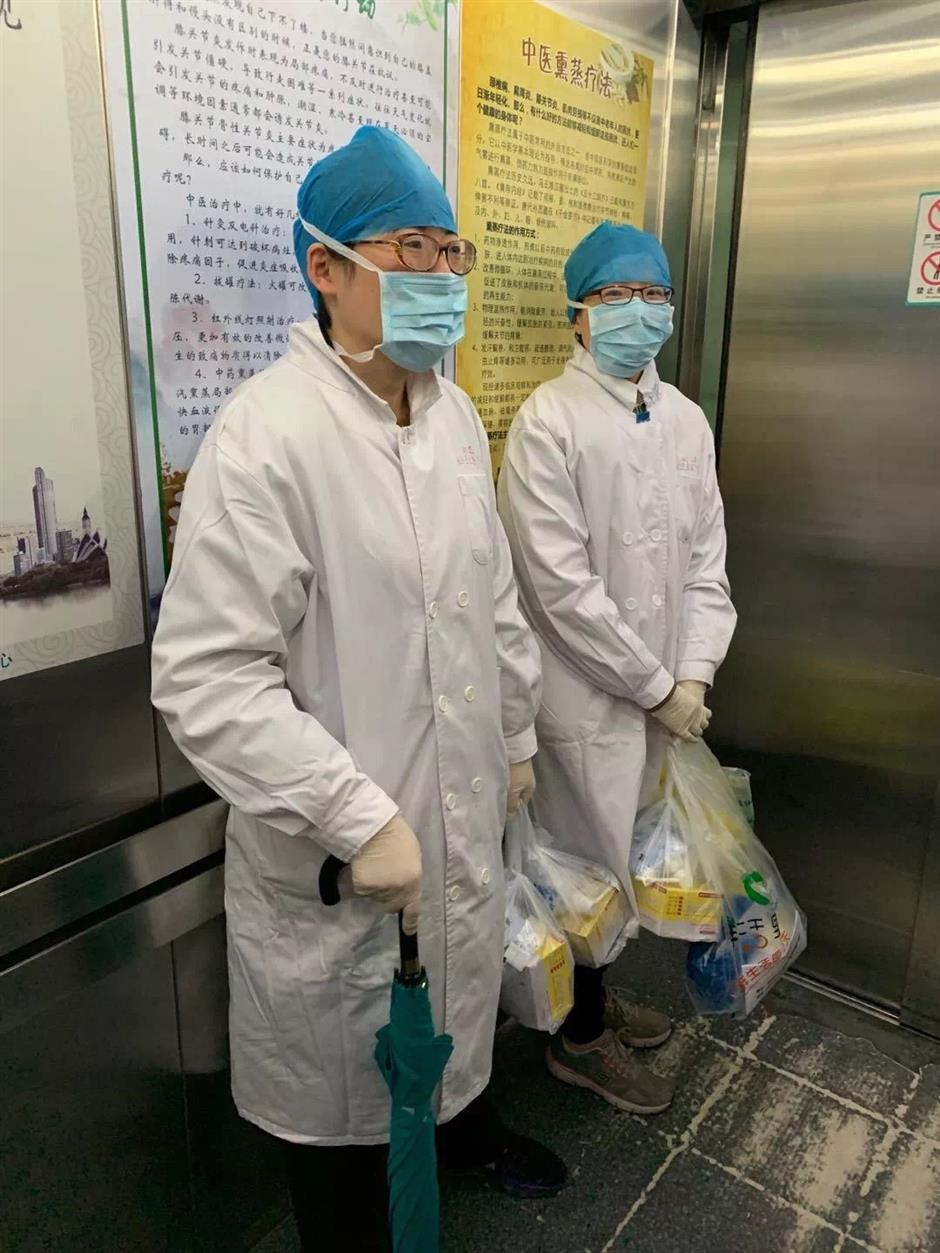