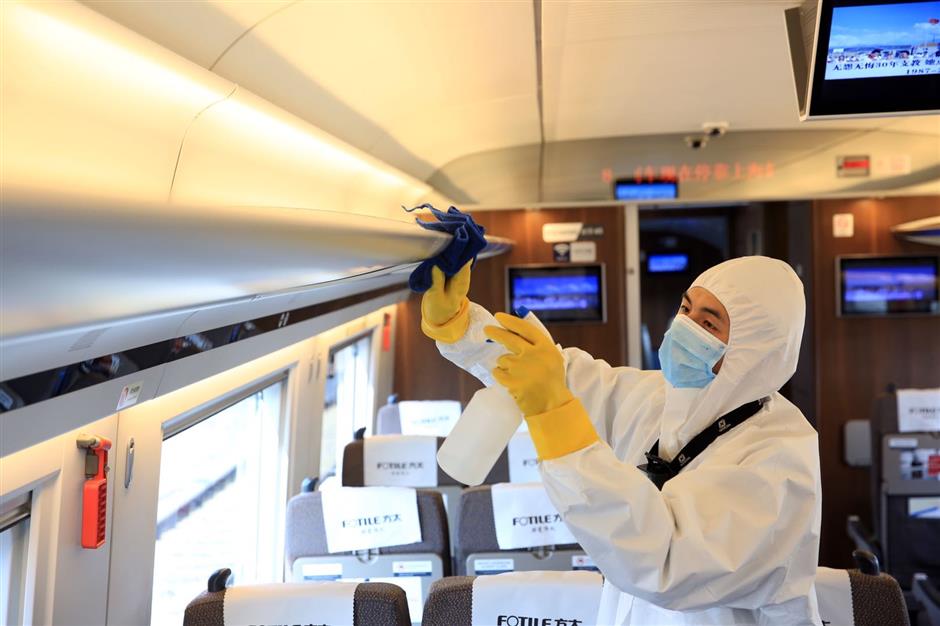 A worker disinfects a high-speed train from Shanghai.

A sanitation worker who was cleaning high-speed trains between Shanghai and and Xi'an, northwest China's Shaanxi Province, has been confirmed with novel coronavirus infection, Shanghai's rail authorities said on Wednesday.

The woman surnamed Wang, is a native of Chengcheng County in Shaanxi. She was confirmed with infection on Sunday.

Wang was on 20 trains starting from January 21, according to an announcement of her movements.

Between January 27 and February 1, Wang stayed at an apartment building in the Hongqiao area, within three kilometers of the Shanghai Hongqiao Railway Station, rail authorities said. The building only accommodates rail station and train workers.

Her body temperature was normal during her stay at the apartment, and she did not have close contact with other people in the building, authorities said.

The temperatures of other people at the apartment building are normal at present, authorities said.

Wang also did cleaning work on high-speed trains between Xi'an and Chengdu and E'mei, southwest China's Sichuan Province, from January 21.

She took a train from Xi'an to Taiyuan, Shanxi Province, on February 3, and then took two taxis back home.

Railway authorities have urged passengers and drivers on the 20 trains, and other people who may have had contact with Wang, to report to their neighborhood or village committees and undergo 14-day isolation at home for medical observation.