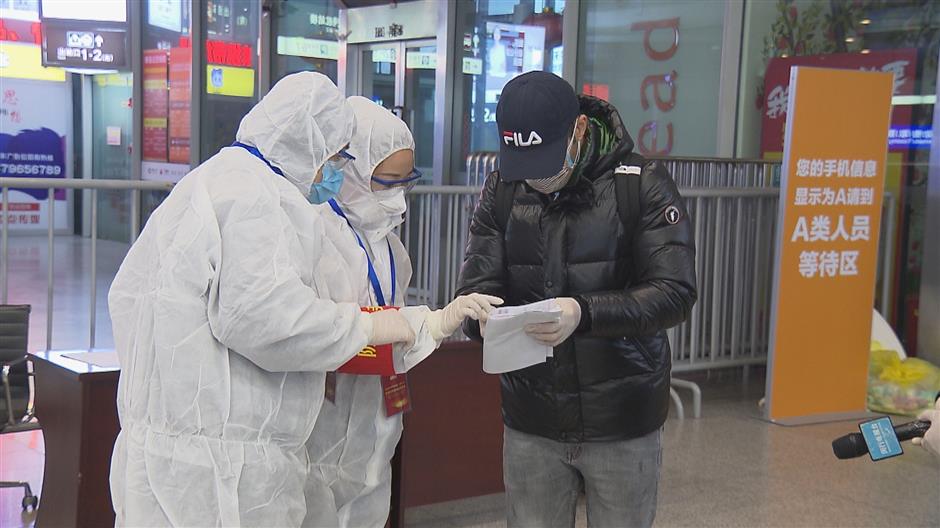 Lu Juan (center), a teacher from Xiehe Education Group, and another volunteer instruct a foreigner on filling in the health statement form at Hongqiao Railway Station.

Foreigners arriving in Shanghai via Hongqiao Railway Station can now find bilingual volunteers to assist them in communicating with inspection staff and completing health statement forms if they need help.

With more people returning to Shanghai after an extended Spring Festival holiday, Minhang District has formed a team of 43 such volunteers to help foreign passengers navigate the new procedures, including a health declaration, introduced to curb the novel coronavirus outbreak.

These volunteers include teachers from bilingual schools and Chinese-language teaching organizations, Chinese who have studied abroad, employees at international trade companies, nurses from international hospitals and university students, as well as government officials who are proficient in English.

According to the district government, more than 50 people applied for the voluntary posts within three hours after the recruitment notice was released and 43 were selected as the first batch to carry out the service; the rest were kept in reserve.

Among them, 20 are managers and teachers at Xiehe Education Group which runs several bilingual schools in Shanghai and other Chinese cities.

“Many of my Chinese and foreign colleagues would like to take part in the activity, but we need only 20 for the first batch and the places were snapped up very quickly,” said Lu Huiwen, general principal of Xiehe.

Lu was the first in Xiehe to register for the program; she volunteered to be a group leader and work on the night shift.

“Shanghai is an international metropolis and expats who work and live in the city are also our citizens,” she said. “We should give our hands to those who love this city and return at this moment when they need help.”

“Everyone can do his or her part in this special situation,” she added. “We are not medical staff who can rescue patients on the frontline; we are not entrepreneurs who can buy a lot of medical supplies; but we are good at language skills, and we can help with communication with foreigners.”

Before serving their duty, all volunteers received training on how to help expats fill in the health statement form and how to use the designed application Healthcare Cloud. They were also trained on self protection measures such as how to correctly put on and take off protective outfits and masks.

They take shifts between 8am and 10pm every day to work in pairs at six checkpoints in the railway station.

Lu Juan, a teacher from Xiehe, was one of the first volunteers on duty.

The first foreigner they served was a Libyan known as Osama who came from Yiwu, in Zhejiang Province, to Shanghai to apply for a visa to Spain. He didn’t know that Shanghai now requires all people arriving to register their health condition and the inspectors’ Chinese explanation could not make him fully understand this requirement. But with help from the volunteers, he finished the registration quickly.

Lu Huiwen served several foreigners who asked for directions on her first night on duty.

“The Healthcare Cloud app is bilingual and some expats can make health statements by themselves. But with more foreigners coming back, the demand for help is expected to increase,” she said. “Meanwhile, we are looking into what more we can do. Currently, we mainly stay at the service station and wait for inspectors to call us when foreign passengers need help. But we found that the radio only broadcasts the new policies in Chinese, so maybe we can help them with broadcasting in English later.”

Lu said they are also planning to help neighborhood committee officials and community social workers with interpretation when they communicate with foreign residents.

“We can help them translate documents, and they might face individualized questions raised by foreigners, which cannot be solved simply with prepared documents,” she said. “We can help them. It’s not that complicated; we can serve them over the phone.”

Lu said they will communicate with the government to see what they can do later to improve service for expats. 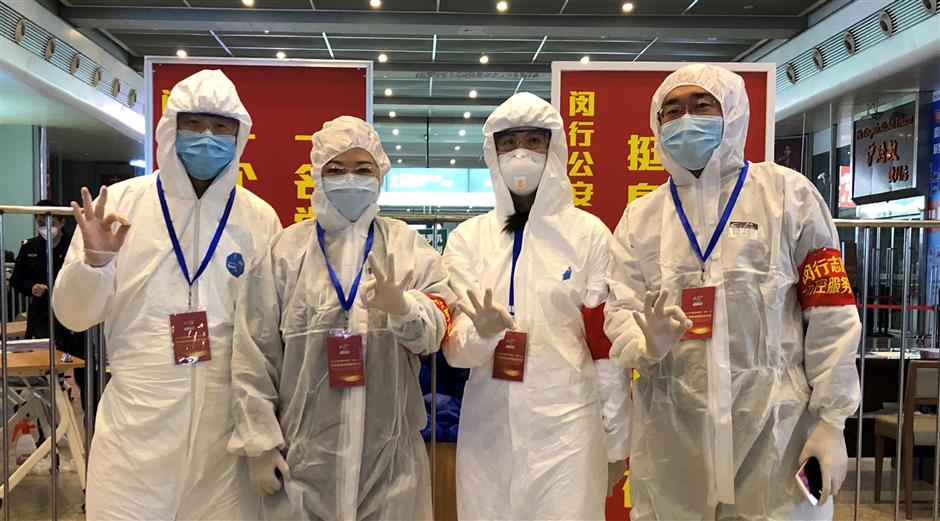 Lu Huiwen (second left), general principal of Xiehe Education Group, is on duty with other volunteers. 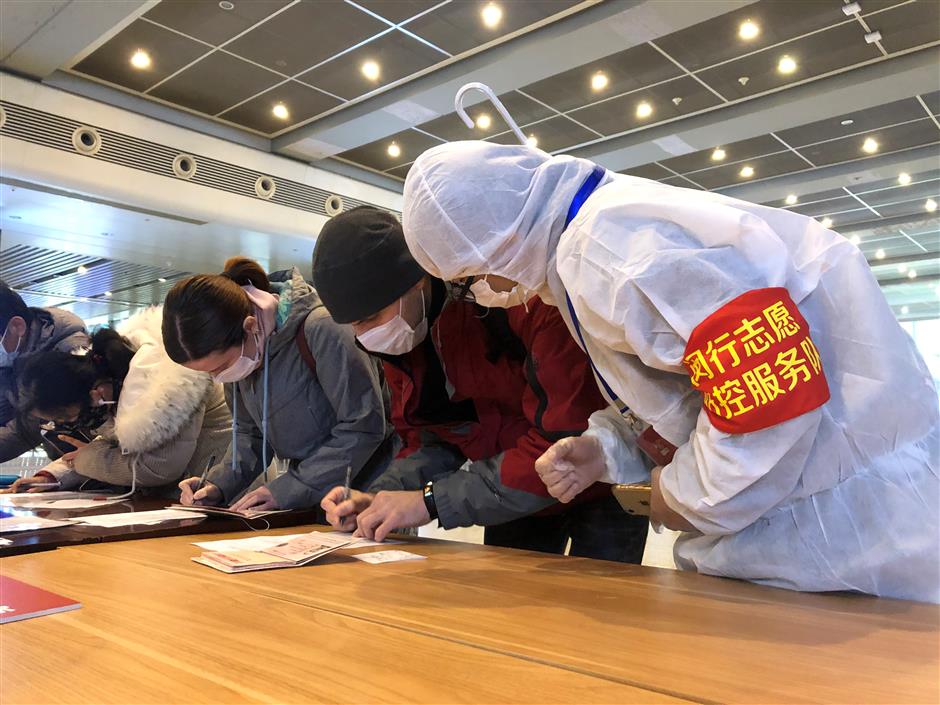 A volunteer instructs a foreigner on completing the health statement form at Hongqiao Railway Station.