Editor’s note: Jing’an sits at the heart of Shanghai. It represents the essence of the history and culture of the city, home to century-old buildings, big-name attractions, glitzy retail malls and charming art galleries. Annual music and art events give the district a distinctive ambience. In this series, we showcase the highlights of Jing’an.

Across the country, medical workers are waging a brave struggle against the new coronavirus, COVID-19. Jing’an is no exception. Home to top hospitals such as Huashan and Huadong, the district has deployed medical teams to aid the coronavirus epicenter of Wuhan. Locally, researchers are testing samples of suspected cases, and community clinic workers are safeguarding the health of neighborhoods. Li Qian learns some of their stories. 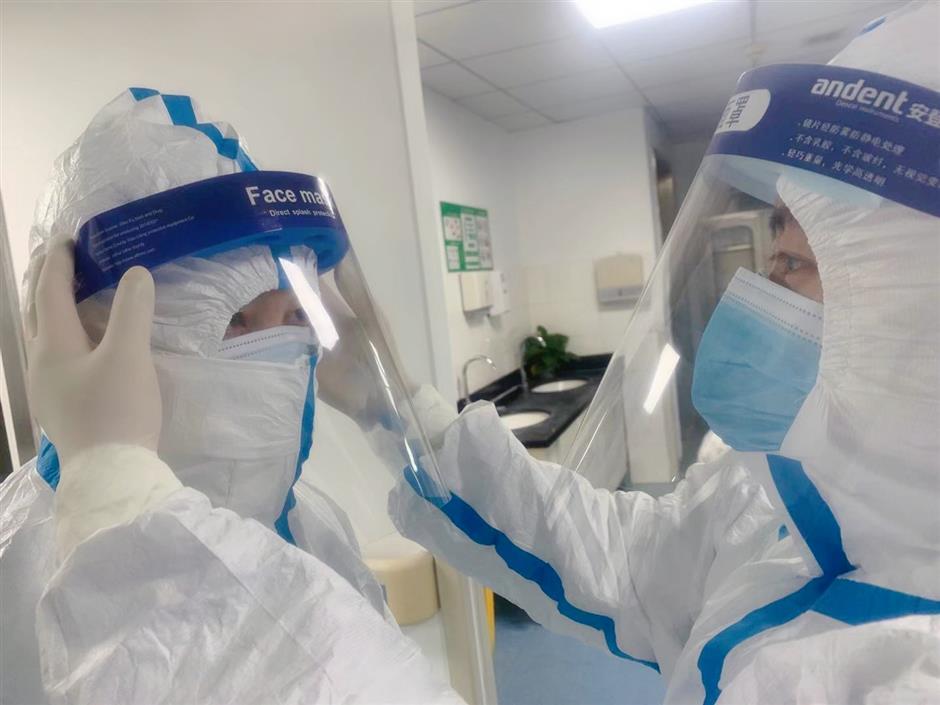 Wu Tingting and Chen Yajuan are nurses at the community clinic in Pengpu Xincun Subdistrict. They are now working at Wuhan Jinyintan Hospital, a designated hospital for treating coronavirus patients. They share their diaries with us.

“At 4am, the train carrying our team of 50 medics arrived in Hubei Province. After we showered in the dormitory, we went to Wuhan Jinyintan Hospital. There, infectious disease specialist Li Liuyi stressed the key points in preventing and controlling the epidemic. She said many nurses had poor awareness of hygiene and lacked proper protective measures in isolation wards. Her talk greatly inspired me.”

“Wuhan had bad weather today. When I went to work at 8am, I found an air of sadness hung over the ward after a coronavirus patient died. His family couldn’t say good-bye to him because he was in an isolation ward. At that time, I realized the impermanence of life and the importance of embracing the present.

Medics in Wuhan can ride shared bikes for free. Sometimes my colleagues and I choose to ride for 10 minutes to the hospital. For us, it’s a chance to get some exercise.

It’s been nearly a week since I arrived in Wuhan. My last day in Shanghai remains vivid. I remember our clinic director Peng Derong helping us carry our luggage and seeing us off at the railway station. At our final farewell, I burst into tears.

gotten accustomed to my job and colleagues, friends and family in Shanghai keep cheering me up, I am less concerned. Don’t worry! I will take care of myself! Go, China! Go, Wuhan!”

“It took me 29 hours to make up my mind to go to Wuhan, get everything prepared and take the train there. I couldn’t sleep tonight. Hugs from my friends and images of colleagues preparing protective gear for me loomed large. We would arrive at our battlefield in Wuhan before dawn. Let’s fight!”

“It’s been rainy for days, but today the sun finally came out. I was assigned to a third-floor ward housing 34 coronavirus pneumonia patients. Four are severely ill.

Before we arrived here, local medics have been overwhelmed with patients. I immediately joined them. After I put on protective clothing and began work, I could feel the stress they have been under. For consecutive six hours, I didn’t eat, drink or go to the toilet. Thanks to their efforts, six patients were discharged today.”

“I finally finished 11 hours of work today. My legs are numb. In the corridor of the ward, I hear only footsteps of medics and alarms of medical devices.

From medical care to ward disinfection, we do everything. Particularly, we administer psychological help to patients because they badly need reassurance.” 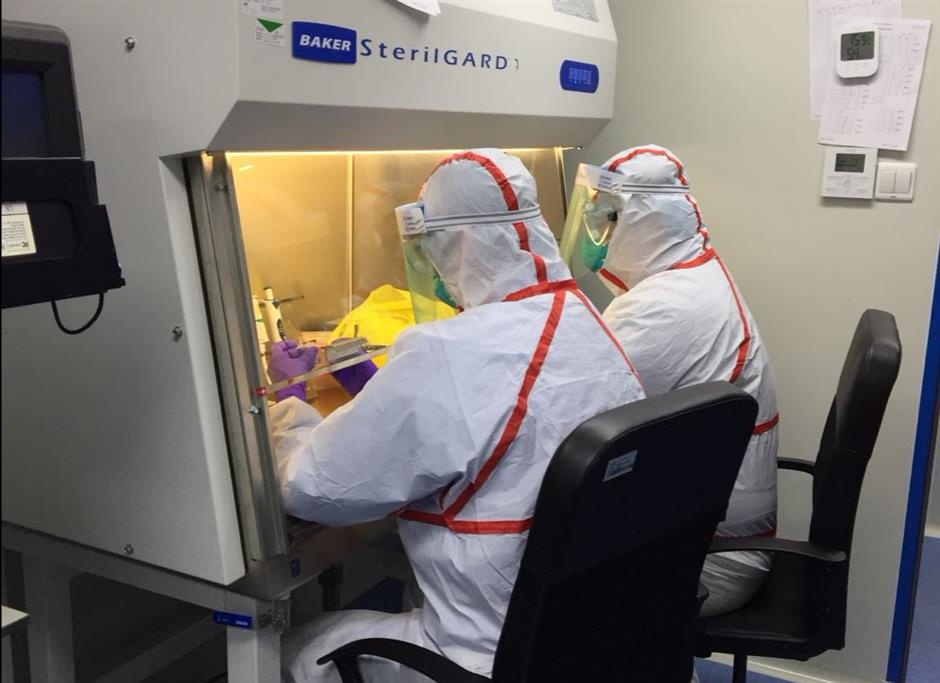 Workers at the Jing’an Center of Disease Control and Prevention have been working around the clock testing samples of suspected infections. So far, they have tested nearly 300 cases.

The microbiological laboratory is at a high level of biosafety. Researchers are required to wear layers of protective gear and go through several doors to enter the lab. The protective gear is too heavy for them to even turn around. They dare not eat or drink before entering the lab to avoid using a toilet.

They work nonstop for five to six hours. It is extremely hot and stuffy, and they sweat profusely. When they take off the protective gear, their clothing is saturated with salt stains.

Yuan Feng, director of the lab, has been working hard since the eve of the Lunar New Year. Her deputy, Cai Mingyi, canceled his holiday trip to work with her.

“We indeed get hungry and thirsty when we are in the lab,” Yuan said. “Sometimes we enter the lab before lunch and don’t finish work until after dinnertime. After work, we eat twice as much as normal. Protective gear is so precious that we don’t want to waste it by leaving the lab.”

Sometimes the sweat stains that form underneath their protective clothing makes beautiful patterns.

One  day, Shen Qi tested 42 samples of 26 suspected cases. After he removed his protective clothing, his colleagues were surprised to see a “mermaid” on his clothing.

“It’s impossible to be fearless, especially respiratory system and human contact,” Yuan said. “It’s very challenging, but our job is to provide support to doctors. It’s our duty.” 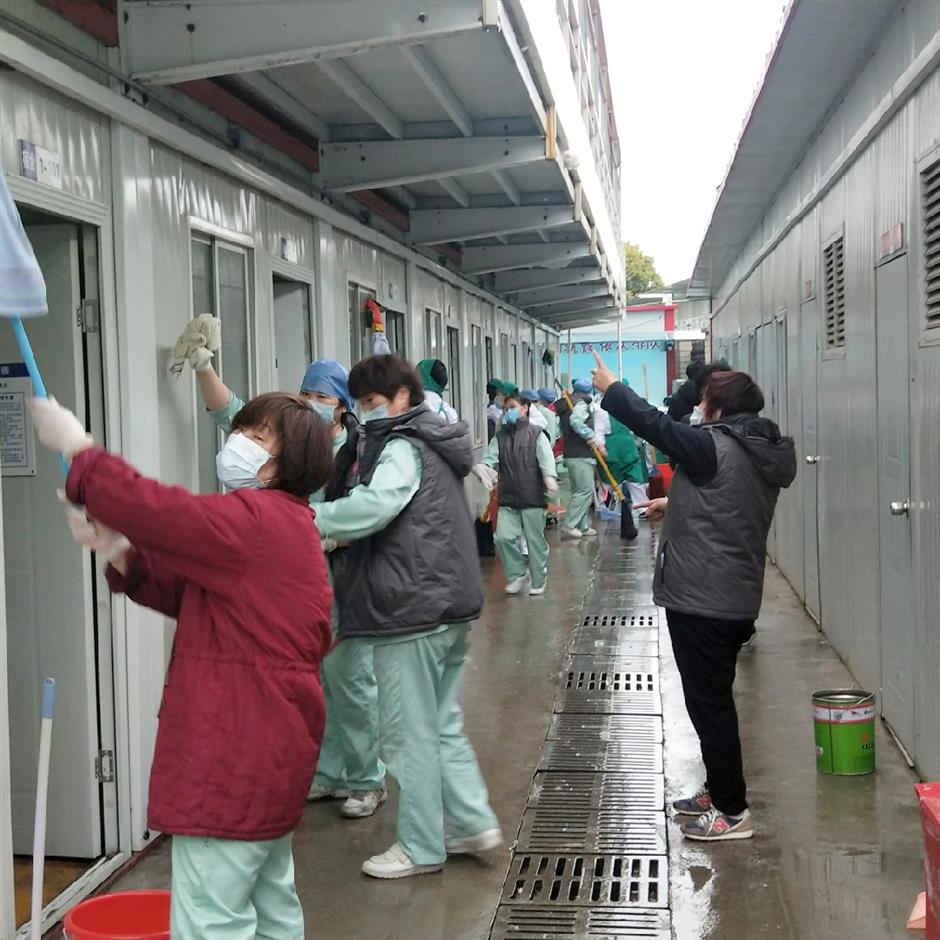 Everyone marveled at the 10-day construction of the makeshift Huoshenshan Hospital in Wuhan. Jing’an has a local version, finished in just 20 hours.

Shanghai confirmed its first case of the virus on January 20 and activated a top-level public health emergency on January 24. Soon, hundreds of patients were packed into the overcrowded fever clinic of the hospital.

“On the eve of the Lunar New Year, our fever clinic received 325 patients, 10 times normal,” Li said. “Some tested positive for coronavirus. Others just had a cold and were at high risk of being infected.

“There are a variety of reasons behind fever,” Wei said. “Some infected patients don’t show any symptoms. How could we quickly diagnose suspected cases? We needed to upgrade our fever clinic.”

According to Li, construction of the isolation wards for suspected cases was put on top priority.

“People with suspected symptoms must be isolated to prevent cross-infection,” he said. “If infection is confirmed, they immediately receive treatment. If not, they are sent home immediately.”

The special wards were built on a construction site just east to the hospital. It took 20 hours to erect the wards. On January 26, they went into operation.