Dr Zhang Wenhong, director of the city coronavirus treatment group, said "treatment in Shanghai has had good results but it doesn't mean the fight has ended.

“The therapy was first tried by the Shanghai team in Wuhan, and Shanghai Public Health Clinical Center also used it on several cases,” he said. “Giving plasma therapy to serious patients can help their tests turn negative, but only plays certain role in the entire treatment. It is impossible for patients to just rise from their beds by themselves after receiving the plasma. The therapy can help shorten the process from positive to negative, but only in small number of patients. Plasma therapy can only help serious patients.”

Zhang said no patient had developed a serious condition in the city for two or three weeks.

"Shanghai had a peak of 26 critical patients and now the figure has dropped to nine. The rest have been discharged. We have the best doctors here," he said. "Compared with elsewhere, the recovery rate in Shanghai is very high and fatalities low. It is because of the efforts of experts on infection, respiratory disease, intensive care and traditional Chinese medicine. The TCM team is very helpful, as they help mild patients recover more quickly and reduce hospitalization time, while stimulating serious patients to become stable.”

“I don’t mean that our medical capability is the best in the world, but the government gives us the best resources. All leading devices like the best respiratory machines, artificial oxygenators are sent to Shanghai Public Health Center. For Extra-Corporeal Membrane Oxygenation, or ECMO, we have six such systems here, while there may be, at most, one ECMO or even none in an entire region in Europe. All these resources and experts are here to save patients.”

As for patients in other provinces who have been found with coronavirus after being discharged, Zhang said it is a complicated problem and depends how samples are collected, and other details. 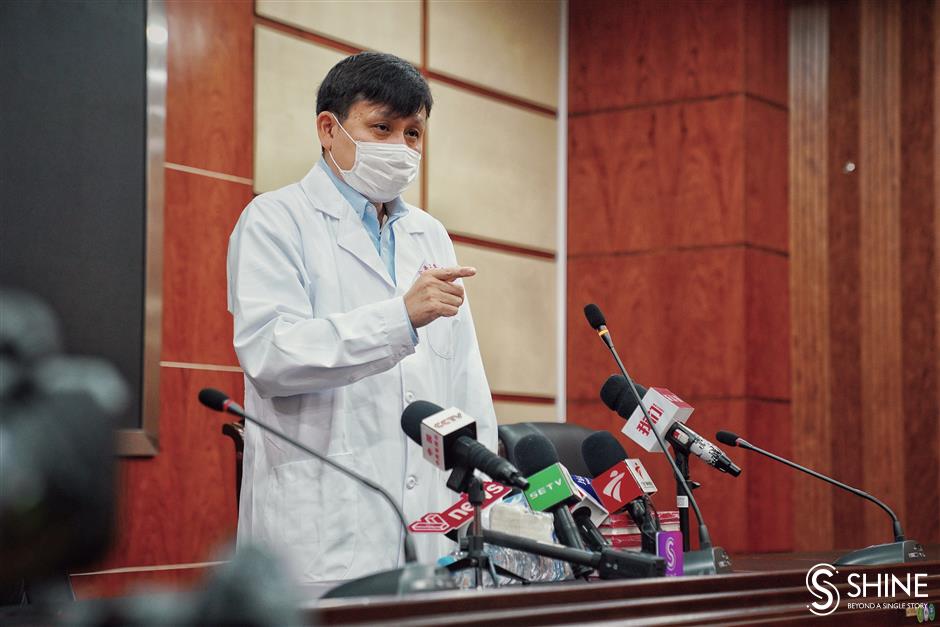 “In Shanghai, patients not only a throat swab but other samples are retained. Patients are not discharged until all samples are negative. So far, no negative patients in Shanghai have been found positive after being discharged.”

Zhang told the China News Agency that coronavirus is “scary," because it is a new virus that people don’t know.

“The Lancet forecast the worst situation for Shanghai, as many people came to Shanghai before Spring Festival and Shanghai has the largest number of flights in China. If not properly controlled, The Lancet estimated that 800,000 people in Shanghai may catch the virus, or 80,000, with  proper preventive measures.

"We conduct epidemiological investigations on each case, which found most cases originated in Wuhan. We have good control of the virus. For a city of 30 million people, it is a tough task. According to the math model, the best result is 80,000 infected people, but we only have had only 337 cases so far. It is outstanding.

“Preventive measures are not a doctor’s job. The Chinese virus control model is very powerful and the most effective for China. In Shanghai, community officials and residents alike have played their roles. If people in the entire country stick together, the disease is preventable and controllable,” he said. “The China model may be not suitable for other countries, but epidemic control is a very basic theory: control the source, cut infection channels, protect vulnerable people. Each country can design their strategy in line with their own situation and health system.

"While some provinces dropped their alert level, Shanghai is different from other regions due to its large influx of people. Business has restarted, but that doesn’t mean an end to virus control level or vigilance,” he said. “It is not just an issue for the government but a task for all the people. Home quarantine, avoiding crowds and wearing masks are still necessary.”

“When everyone has returned to Shanghai, all business has resumed, and no new patients are found, then is the time that we can finally remove the masks,” Zhang concluded.