An on-ramp to Yixian Elevated Road on Jinian Road at 8:45am on Monday 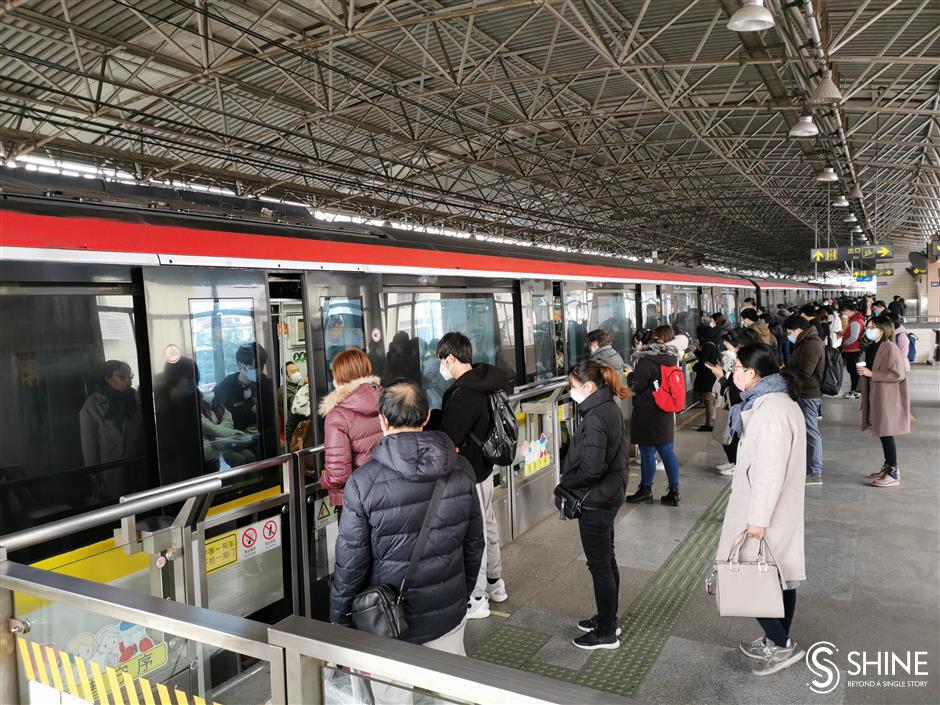 Passengers board a Line 3 train at Jiangwan Town Station at 8:25am on Monday.

Shanghai streets on Monday morning were almost as busy as they were before the coronavirus outbreak, traffic police said.

Other congested areas included the Yan’an Road E. Tunnel, Xizang Road Tunnel and the Nanpu Bridge, according to the police.

Police said they have deployed more officers to the most congested junctions and roads where accidents are frequent, and have enhanced traffic management at tunnels, elevated roads, major streets and large shopping hubs and grocery markets.

Meanwhile, the number of Metro passengers was also on the rise, with 1.1 million people transported by 9am, 334,000 more than Monday last week, although still 63 percent less than on working Mondays before the epidemic, Shanghai Metro said. 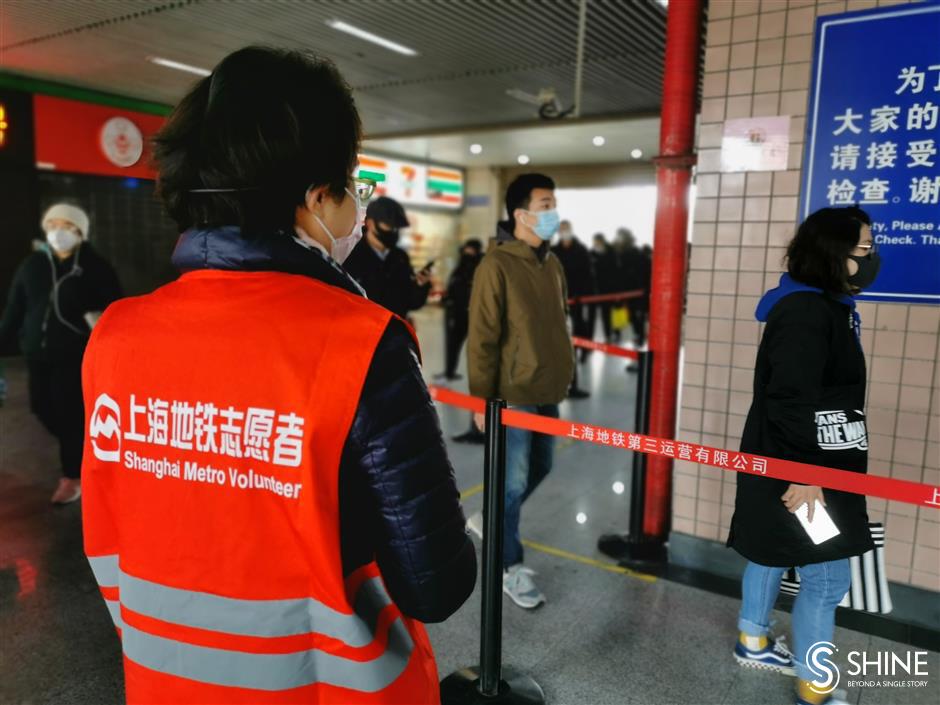 A Metro volunteer at Jiangwan Town Station on Monday morning reminds passengers to keep their distance from each other. 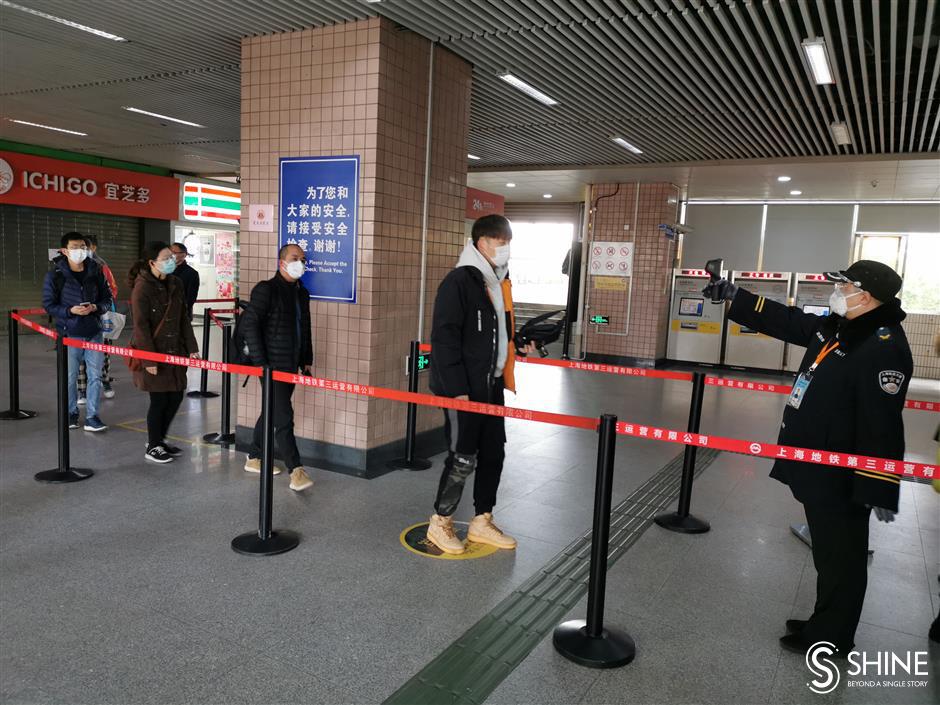 Passengers have their temperatures measured when entering Jiangwan Town Station on Monday morning.

Crowd-control measures were taken at 23 Metro stations, one of which was Jiangwan Town Station on Line 3 in northern Shanghai.

During morning rush hour at this station, some turnstiles were closed so as to keep passengers who enter the station moving in a line. Escalators going up toward the platform were also not available in order to slow down passengers.

Volunteers worked with Metro staff to remind passengers to keep their distance from each other and be prepared to have their temperatures measured.

Jiang Shouyue, a Metro manager in charge of this station, said that once trains reach 60 percent of passenger capacity, new passengers will be allowed into the station in groups at intervals. This measure was not taken at the station on Monday morning.

“On normal working Mondays about 10,000 people take trains from this station, but on Monday last week there were under 3,000 people. It seems that the number only slightly rose today,” she said. “Still many companies allow their employees to work from home or arrive at work at a later time.”

At Heshahangcheng Station, railings were lined up outside the entrance to the station, so that passengers had to walk about five minutes till they reached the turnstiles. Once the passing trains were considered to be too full with people, passengers waiting to enter the station were stopped for one minute. 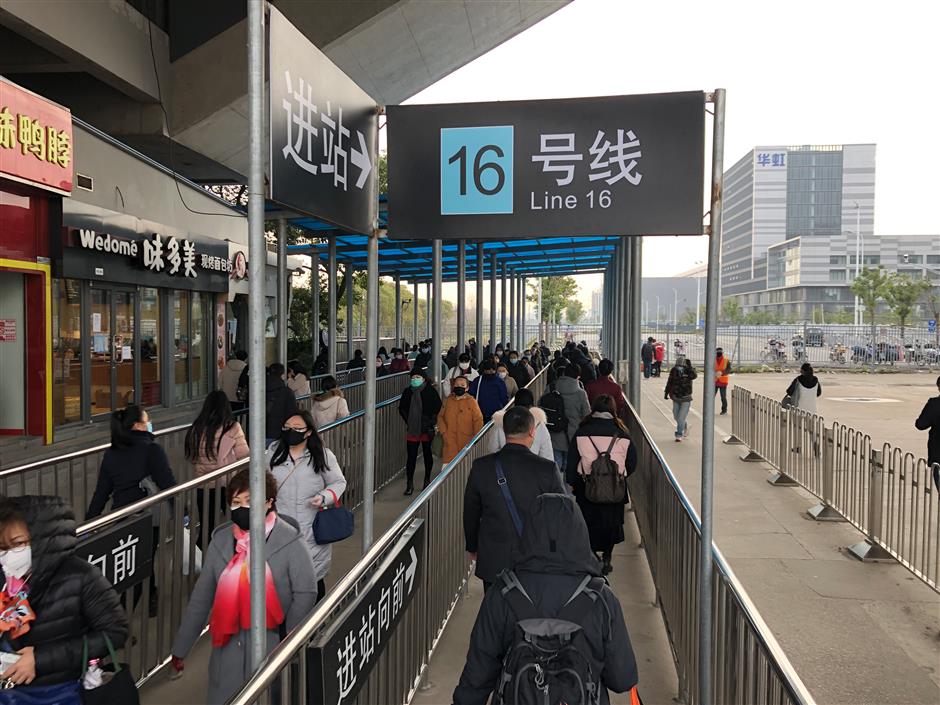