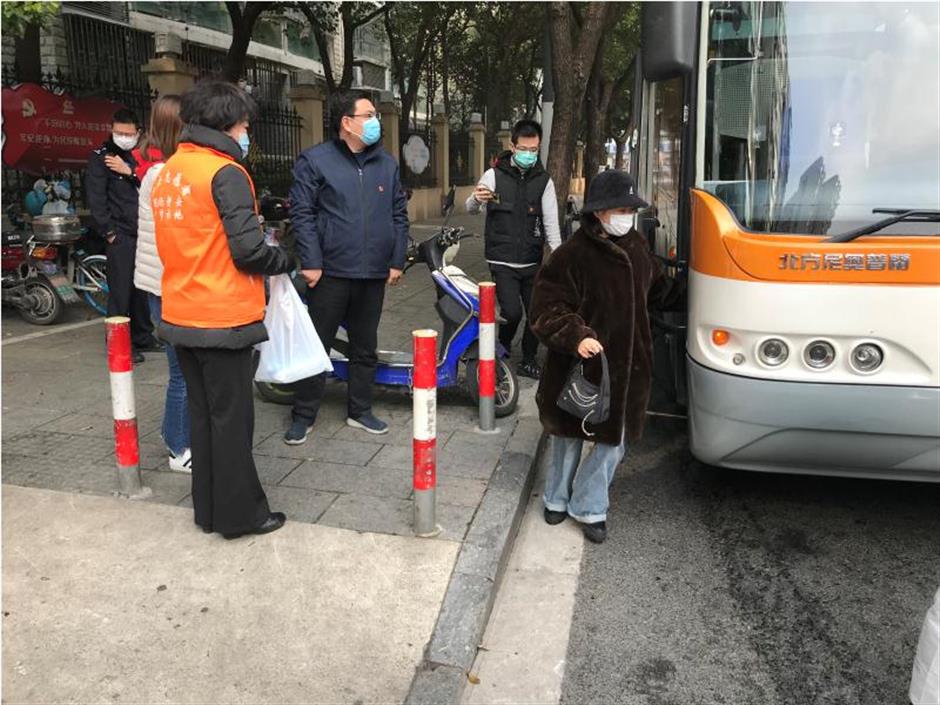 Valentina Li, in black hat and coat, gets off a bus from the airport as she returns home in Shanghai from overseas.

When Valentina Li arrived home in Shanghai after an exhausting overnight flight from Paris, she could finally rest assured. “There is nowhere else safer than China. It’s right to go back,” she said.

A bus took Li and a man who had flown back from Rome to their homes in the Zhijiang Road W. subdistrict in Jing’an District at 3:30pm on Saturday.

A group of people were at the entrance of the residential complex to greet her.

“It’s pretty welcoming,” she said, astonished by the reception.

Community workers and volunteers, local medical workers and police officers took her temperature, guided her to sign a home quarantine commitment letter and helped her with her luggage.

Li was given a bag of alcohol disinfectant, a clinical thermometer, masks and gloves. 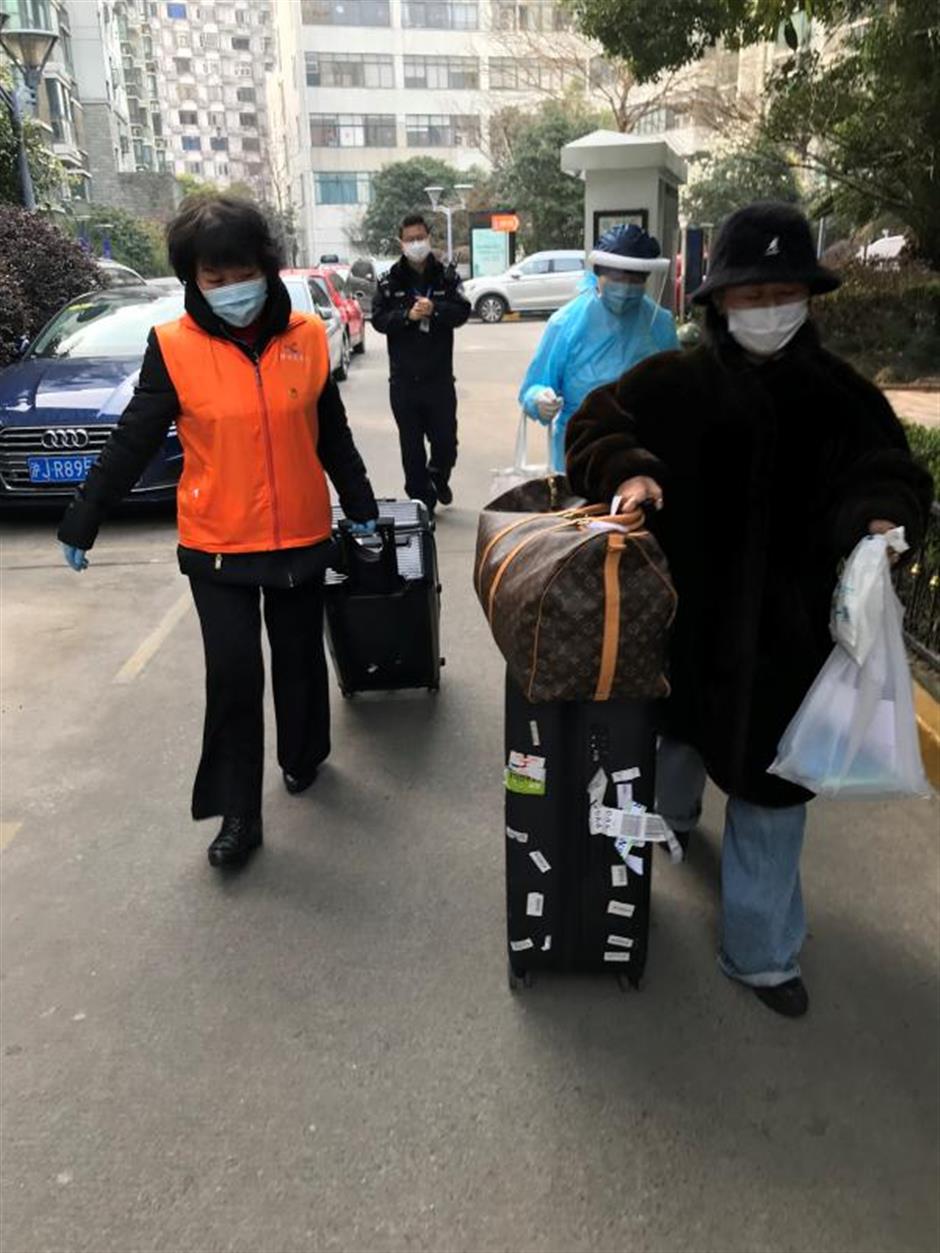 Community workers and volunteers give Valentina Li a hand with her luggage.

Due to work, Li travels a lot. On January 31, she was overseas on business before the novel coronavirus outbreak had swept the world.

“I had traveled to New York in the US and London in the UK. I was in Milan in Italy from February 17 to 23, and later I was staying in France,” she said. “I found many people overseas just simply compared the novel coronavirus with normal flu. Generally, they didn’t take it seriously. Very few pedestrians in Italy were wearing masks, and neither did passengers at the airport in Paris.”

Li’s flight from Paris to Shanghai stopped over in Russia.

“Crew members of the Aeroflot Russian Airlines wore masks all the time on board. Also, I found that most Asian people were taking good protective measures,” she said.

Her flight arrived in Shanghai after 9am on Saturday.

As soon as she landed, she received a call from Shanghai authorities telling her what to do next.

“I had been a little bit worried but this call really relieved my tensions,” she said.

But it took her around six hours to get home from the airport. Passengers were required to stay on the plane for an hour.

“Some people boarded the plane, seized our passports and asked about our whereabouts. People who had been to Italy within 14 days were taken to take nucleic acid-based detection tests,” she said. “I was exempt from the test as I stayed in France 14 days ago.”

After she was allowed off the plane, she was subject to strict inspections.

“Officials asked me a lot. And I found my luggage was disinfected,” she said. 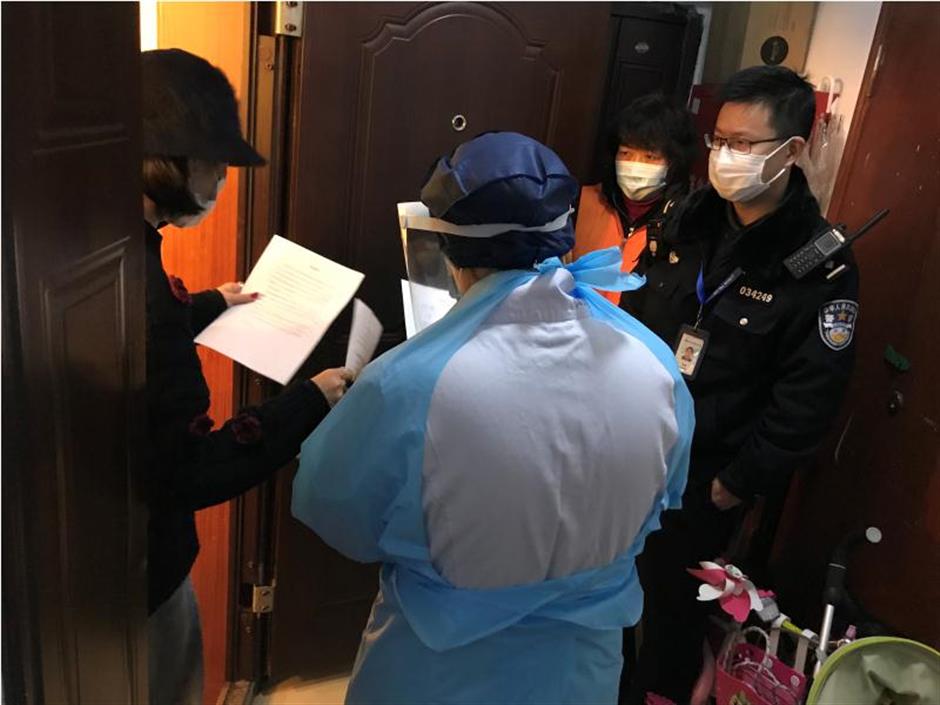 People having to stay at home for quarantine are visited every day.

She was guided to a desk to register her ID number, home address and other personal information, and then took a designated bus home.

For those without private transport, every district has prepared buses.

“Besides the driver, there were just three of us on the bus, a man from Rome, a volunteer from the airport and me. We sat far apart and we didn’t talk. There was a police car following us all the way,” she said.

Subdistrict and neighborhood officials had been informed of her arrival.

She said: “I was told that I should stay at home for a 14-day quarantine. Medical workers would visit me every day to take my temperature.

“Neighborhood committee workers would help me to make purchases of daily commodities and send takeout food for me. And I don’t need to sort out garbage because professionals would come.

“So far, everything is fine. I haven’t encountered any difficulty, and instead, I feel so grateful for receiving so much help and care from my neighborhood.”

With Li’s permission, equipment which alerts local officials if she is visited or leaves home, has been installed at her doorstep.

The residential complex has picked up seven people from the airport so far. Local officials are keeping a close eye on them.