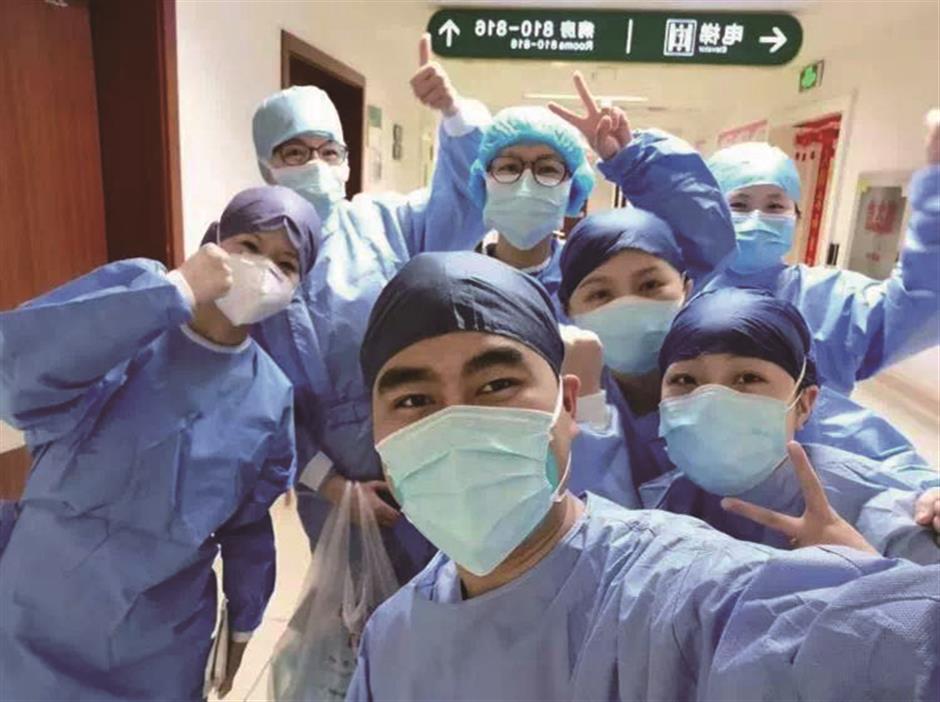 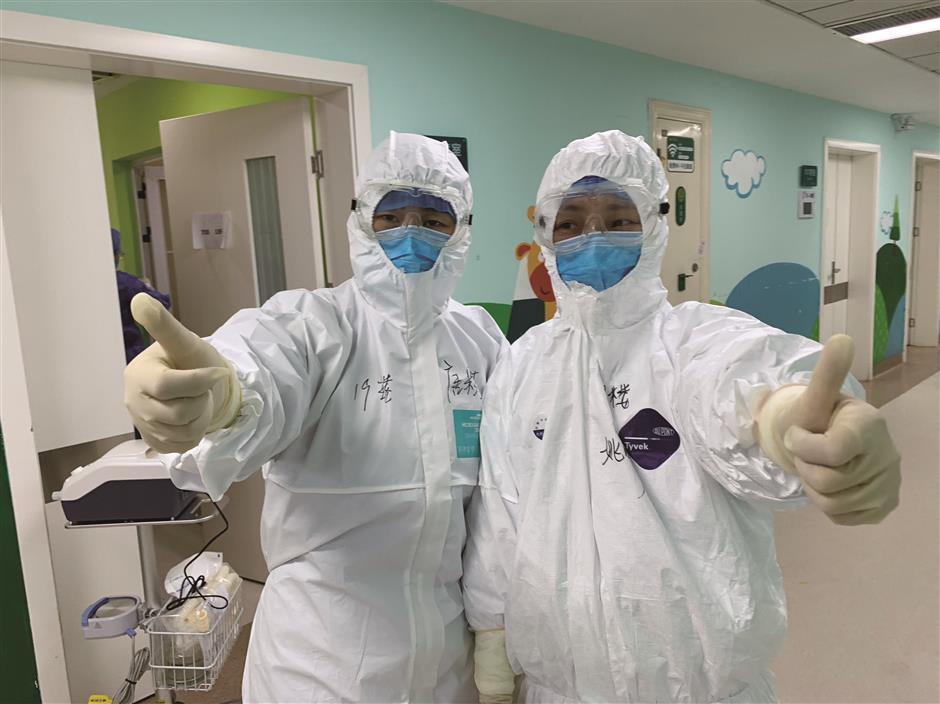 Members of Songjiang medical team thumb-up in front of camera.

Nurse Yu Wenjie took her first night shift on January 31. To prevent viral spreading, the hospital she was in had shut down its air-conditioning system. Though she put on an additional sweater and used three heating pads, she still felt cold.

“When I was busy, I felt less cold. From 1am to 3am, patients’ needs were more frequent. But starting from 3am, I had fewer patients to attend to and when I sat down I felt very cold,” said Yu.

From 5am to 6am it was another busy time for Yu. She took blood, distributed medicine and delivered breakfast.

Movement kept her warm again, or it might be the result of daybreak or the grateful patient’s smiles. 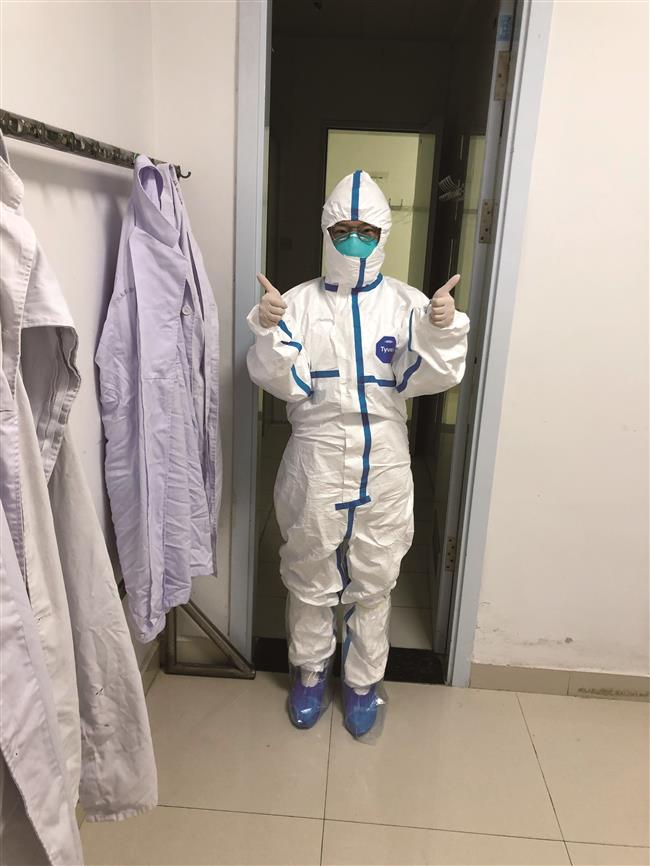 To save resources as much as possible, doctors and nurses on duty would confine themselves to the semi-contaminated zone till lunch or dinner.

“I dared not drink too much water because I was afraid of using the bathroom. Four hours are a long time to endure,” said Li Chunhua, a fellow nurse. After her first shift, Li simply put on a diaper.

Xing Lisha, another nurse with the team, was told on January 30 she would be deployed to the intensive care unit at Wuhan No. 3 Hospital. Xing has no ICU experience.

At 8am on February 1, Xing followed a head nurse to enter an ICU for the first time.

“My tutors were very patient and elaborate on everything in detail. They would demonstrate to me the most common things including how to spoon-feed patients, offer them medicine and assist them in using the bathroom,” said Xing.

“The intensive care unit I am working at has 23 patients. Most are elderly people who can’t independently dine or use a bathroom. They need nurses,” said Xing. 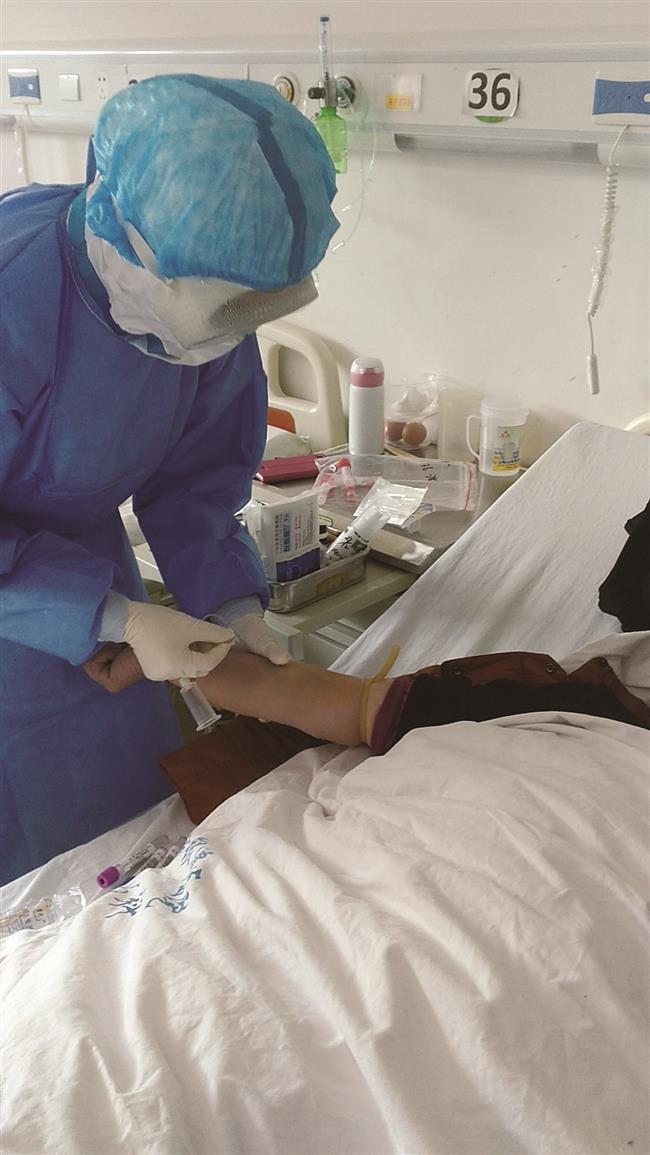 Nurse Xing Lisha gives an injection to a patient at the intensive care unit of Wuhan No. 3 Hospital.

Team member Huang Xiaoli posted a brief WeChat moment on February 5: “Look at the lovely DIY bags, made by my colleagues in the same department.”

In the photos were some waist bags, hand-made and somewhat crude, but with lovely hand-drawn patterns including Mickey Mouse, Gucci, Chanel and Hermes logos.

The protective suits medical staff wore had no pockets, so they had nowhere to hold a pen when they needed to take notes while giving injections or changing medicine. And when they forgot to take a pen, they had to run between the wards and the nurse station.

But some smart women had an idea.

They made square bags cut from non-woven fabric treatment towels and drew Mickey Mouse and fish patterns on them. When they drew Gucci, Chanel or Hermes logos on the bags, they jokingly said they were “limited editions.”

“We felt happy even in these difficult times,” said 43-year-old Huang. “When we gain victory and are back to Songjiang, I will tell these stories to my son, a fan of comics.”

To Huang’s delight, when nurses appeared with those cartoon-painted bags, quite a few patients who had been silent began to talk. Their spirits were lifted and they cracked a smile. An elderly patient even phoned his grandson to talk about the nurses’ “global edition” bags.

“Hope spreads,” said Huang. “Though we are wrapped in protective suits, we can become emotionally attached to our patients through such small gestures and let them know we are making efforts together with them.” 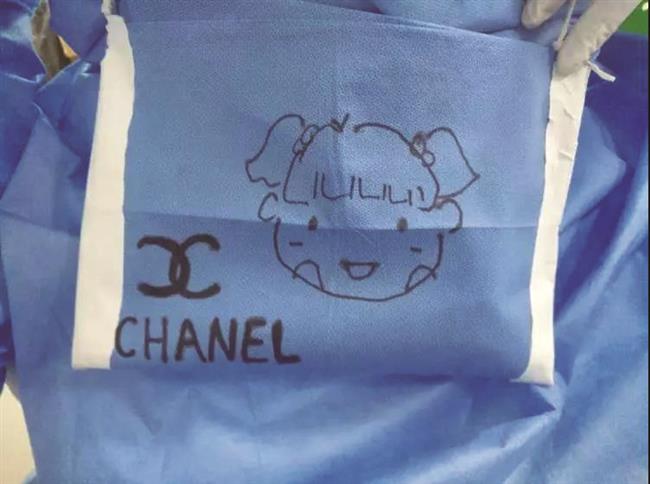 Feeling apologetic for her father

The story of Liu Shuangyuan, another member of the Songjiang medical team, and her father is about a belated apology.

Liu, a nurse at Sijing Hospital, received a phone call from her father in Xi’an in Shaanxi Province before the Spring Festival. She was informed that her father had been diagnosed with a large liver cyst and an operation was suggested.

To better look after her father, Liu asked him to spend Spring Festival in Shanghai and receive treatment in a Shanghai hospital after Chinese New Year.

The day before Lunar New Year’s Eve, as soon as Liu met her father at the railway station, she received a notice to help in the virus-hit Wuhan in a few days.

“I applied without any hesitation and told my family about my decision afterward. A few days later, I set out for Wuhan,” Liu recalled.

On January 28, Liu bid farewell to her father and flew to Wuhan with her team members.

On landing, she asked for a haircut and immediately threw herself into the work of helping novel coronavirus pneumonia patients.

Several days later, Liu called a relative in Shanghai to ask about her father’s condition. It wasn’t until then that she learned her father had taken a train back to Xi’an so that she wouldn’t have to worry about him any more.

“During this trip to aid Wuhan, I felt mostly sorry for my father,” said Liu. “He is sick and traveled miles to Shanghai. He didn’t receive any treatment and got tired during the trip. I couldn’t care for him in ordinary days, and neither could I when he is sick. I feel really sorry.” 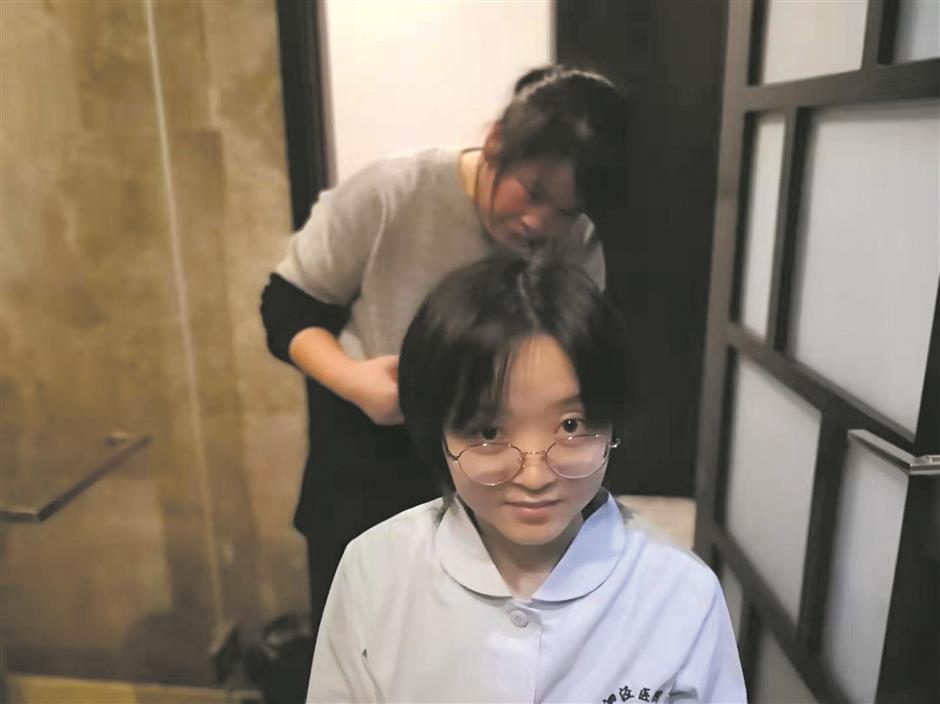 Doctor surprises patients when she talks

Dr Sheng Chunfeng is the only member of the Songjiang team who is from Hubei Province. Able to speak Hubei dialect, Sheng has deep feelings for her birthplace.

During ward rounds at Wuhan No. 3 Hospital, Sheng would stay a little longer to chat with patients in Hubei dialect. “Patients would feel stressed when faced with the disease, so it’s important to offer counseling to them,” said Sheng.

Having lived for eight years in Wuhan, Sheng had kept in touch with friends there. When off work, she would get phone calls and WeChat messages asking for help or counseling.

“There was a family of three. The wife was unfortunately infected with novel coronavirus pneumonia. Before she was in hospital, the three members of the family carried out room confinement, with the husband sending meals to his wife’s and child’s room. The man was eager to find out what else he could do in such a difficult time, but I had no idea,” Sheng recalled.

“I could only tell him some basic prevention measures. A suggestion of opening window and allowing ventilation was an irresponsible one, because I didn’t know the layout of their house and didn’t know whether opening a window would raise the infection risk for him and his child,” said Sheng.

“But as doctors, we have to be brave,” said Sheng.

As a wife and a mother, Sheng was confident that her own family would not be troubled by her absence.

“My husband and son can take care of themselves,” said Sheng. “My son is a sophomore this year. When I was busy with hospital work at normal times, he would be the caring one and look after me.”

“Mom is very busy in Wuhan. Every time I called her, she would hang up after a few words,” said You Hengzhi, Sheng’s son. “But I want to tell her, we are sufficient with vegetables and fruits. My dad and I eat well. Don’t worry about us and take care of yourself.” 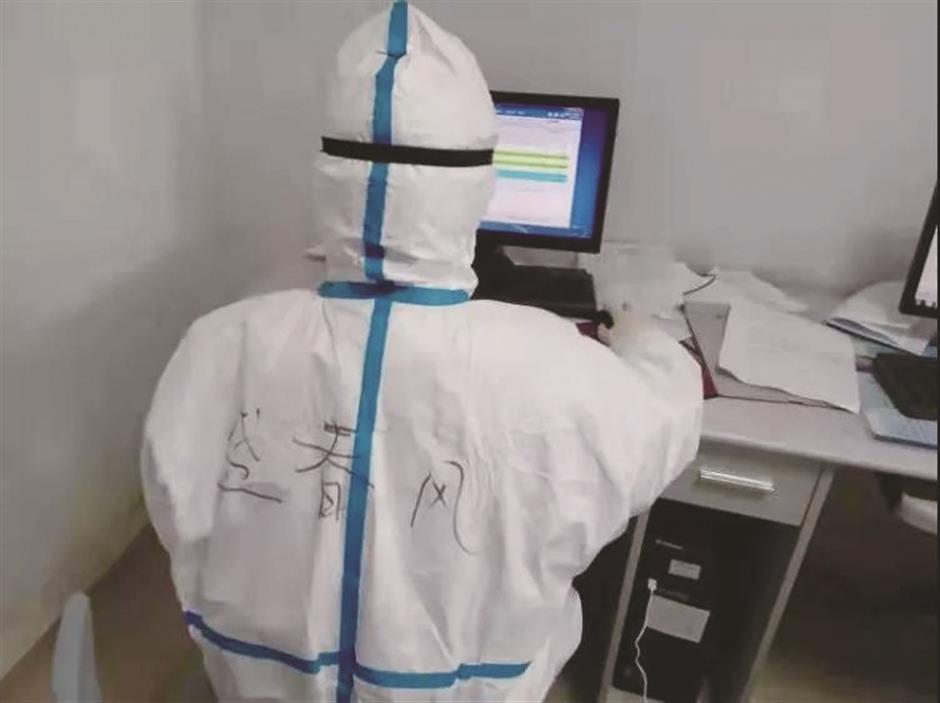