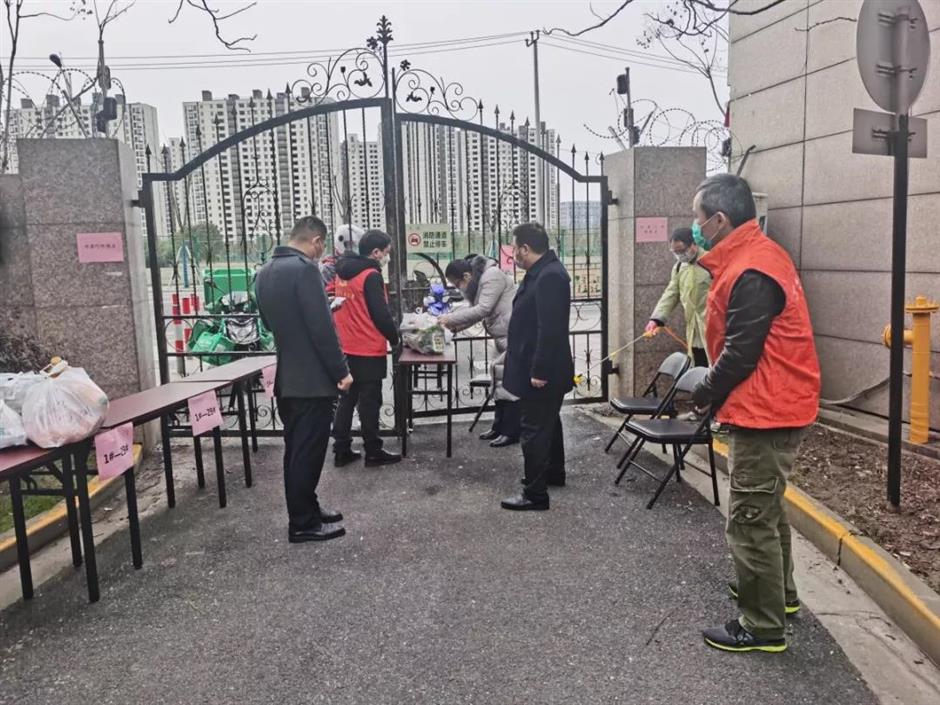 Takeaway meals or mail  in Laidun neighborhood are put on desks that have been marked with building numbers so that residents can directly fetch their packages from one of the desks.

Inspections to identify potential novel coronavirus carriers at a Songjiang neighborhood were carried out by community committee members.

The Laidun Neighborhood of Zhongshan Community has 2,565 households with more than 8,100 residents migrants.

To safeguard such a large neighborhood, personnel registration is crucial. Together with its original facial recognition system, the neighborhood launched a QR code scanning system.

The system, developed by Shanghai Tianfu Information Technology Co, allows residents to scan a code and fill in information online using cellphones if their temperature is normal. After registration, residents enter the neighborhood by scanning the code and showing their digital gate passes.

Committee members noted details of all the residents hailing from Hubei Province, the epicenter of the novel coronavirus outbreak, and their vehcile plate numbers. The information was then input to a warning list at the gate entry system. Once a vehicle with a Hubei plate number entered the neighborhood, epidemic prevention workers would receive a short message cautioning them to take action.

In addition, smart door sensors have been installed at households required to undergo home confinement.

A handbook standardizing disease prevention measures and procedures and home confinement procedures were distributed for the use of neighborhood committee workers.

Takeaway or delivery staff are not allowed to enter the neighborhood. The daily total of more than 200 packages of takeaway meals or mail were put on desks that had been marked with building numbers so that residents could directly fetch their packages from one of the desks.

Besides carrying out disease prevention work, a service team made up of neighborhood committee members, property management company workers and volunteers also offered help including delivering food to home confinement households, sending food and other necessities to disabled residents or old people living alone, and translating disease prevention notices for the more than 100 foreign households.