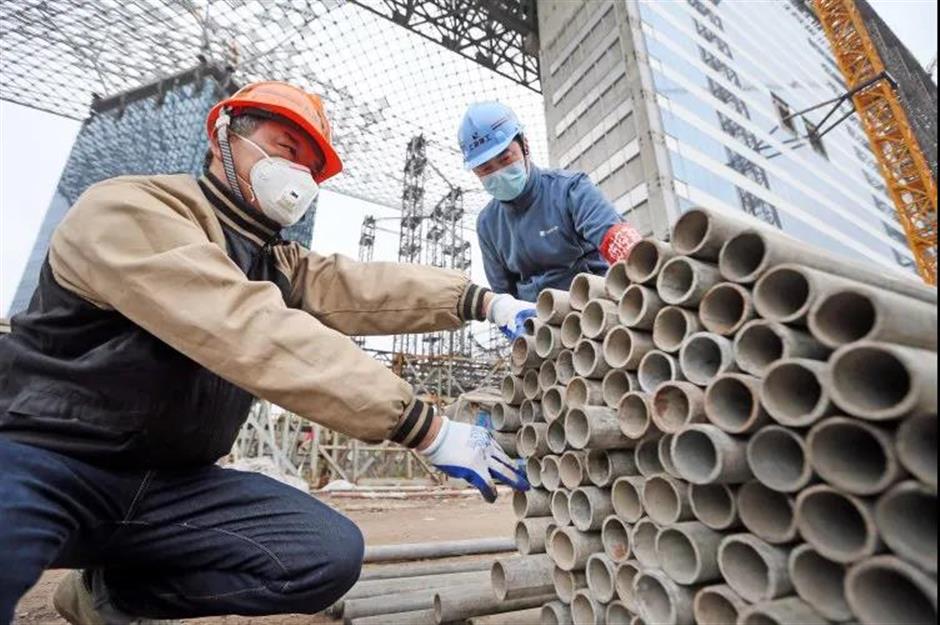 The work resumption rate of Songjiang’s companies after the delay caused by the novel coronavirus outbreak had reached 99.6 percent, or 11,800 in total, by March 3. Among them 1,405 are medium-sized or large-scale industrial companies and they account for a resumption rate of 100 percent in their own category, according to statistics released by the Songjiang Economic Committee.

The number of employees in the district back at their posts amounted to 338,052, accounting for 87.46 percent of the overall workforce.

The 12 shopping malls the district authority has been paying special attention to saw 1,059 stores reopening, or a work resumption rate of 71.41 percent. Ten of the district’s key construction projects are back on their normal course with project teams speeding up construction in an orderly fashion.

“Online information platforms play a key role in the district’s endeavor to help with the resumption of work and production. Through data sharing, we help companies recover work,” an official with the economic committee said.

Data sharing has been achieved between the platform and the district’s human resources and social security bureau and the emergency bureau. So far the platform has collected information covering over 400 companies in the district.

The committee, through its WeChat account — rongchenganjian1808 — distributed questionnaires to companies in order to find out their epidemic prevention, security and daily operating conditions, as well as to inquire about recruitment difficulties, shortage of epidemic prevention items or financial distress among companies.

Quite a few companies did find difficulties due to the epidemic, especially with cash flow.

To relieve the financial burden of Wanlay Co, a disinfection solutions supplier in Songjiang, China Construction Bank’s Songjiang branch, assisted by the district’s development and reform commission, succeeded in granting loans of 3 million yuan (US$432,115) to the company within 32 hours. To achieve that, 20 staff at the bank took part in the process.

Other cases included a 2-million-yuan loan to Shanghai Gangkai Purifying Products Co from the Industrial and Commercial Bank of China’s Songjiang branch within a day, and an urgent loan of 2.7 million yuan to Linghang Electromechanical Co, a company aiding construction of Wuhan Leishenshan Hospital, by the Agricultural Bank of China’s Songjiang branch.

In addition, since early February the economic committee has been carrying out its overall financial aid to the district’s companies. In February, 69 companies received a total financial aid of around 38 million yuan.

As the cradle of Yangtze River Delta G60 High-tech Corridor, Songjiang is also actively cooperating with eight cities to ensure recovery in both the upper reaches and the lower reaches of the industrial chain.