A day in the life of a neighborhood coping with quarantine

The population of the Jinxiu Jiangnan neighborhood in Hongqiao Town in Minhang District is 40 percent South Korean, and many of those residents have found themselves quarantined at home after returning from trips to their native country. On Thursday, Shanghai Daily spent a day in the neighborhood to view first-hand how the community has mobilized to both enforce the quarantine and ensure that families confined to home are well supported. 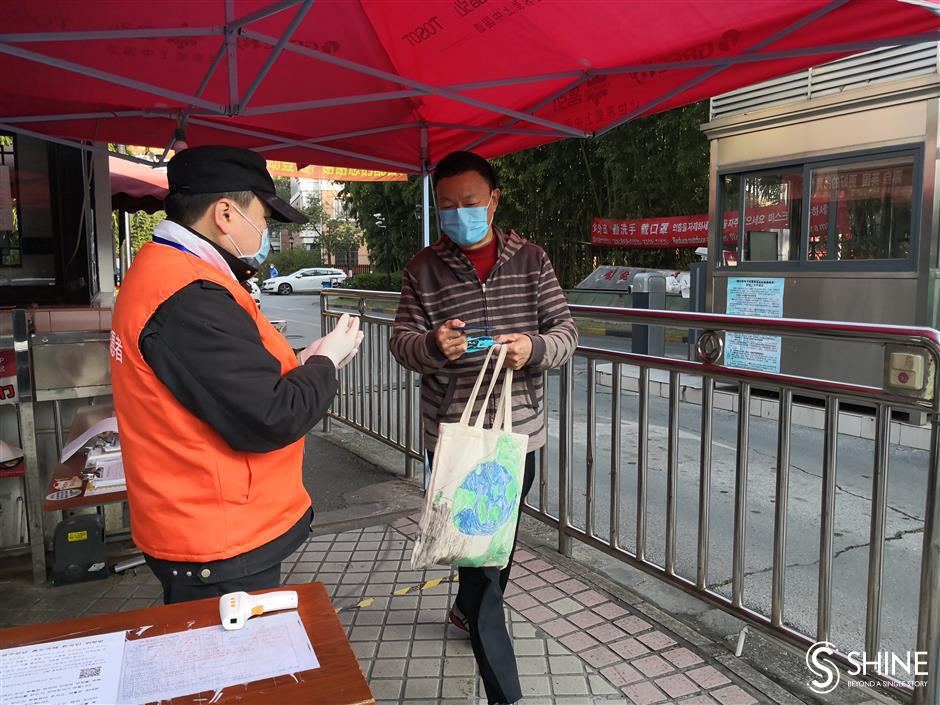 A security guard checks a resident's pass when he leaves the Taoranju residential compound. 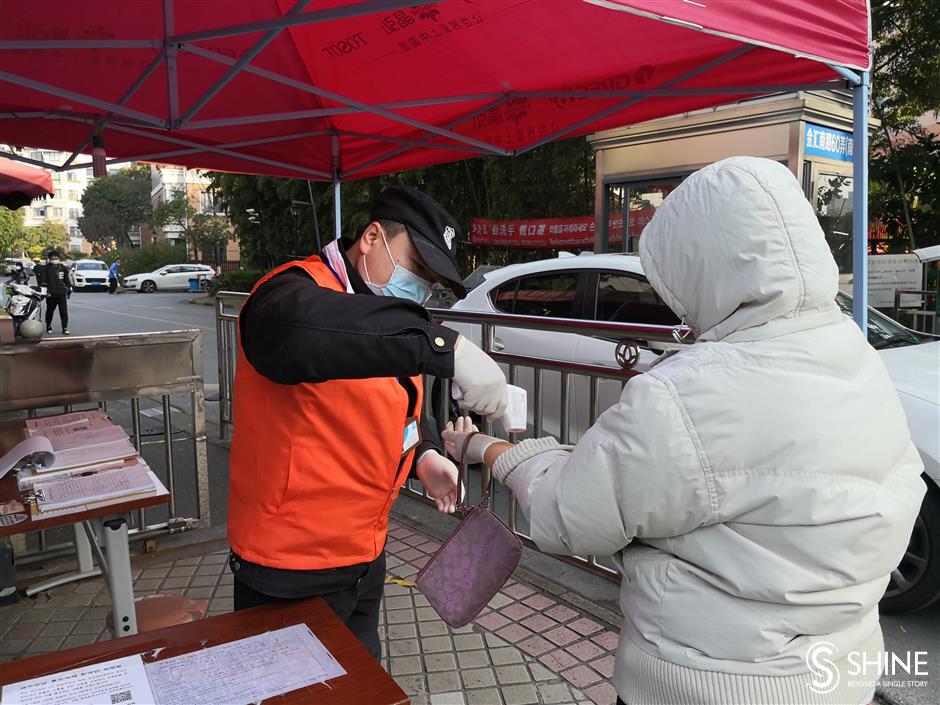 A security guard takes a resident's temperature when she enters the residential compound.

Shanghai Daily reporters arrive at the gate of Taoranju, a residential compound within the neighborhood, and find security guards checking the passes of all those entering and leaving. Those entering also have temperatures taken.

Chen Qinghua, Party secretary of the neighborhood committee, explains that closure of compounds has reduced the risk of cross infection. Special passes have been distributed to residents who are not in quarantine to allow them to come and go. Others are banned from passing through the gate.

“We have received complaints from some residents about the inconvenience caused by the strict measures,” Chen admits. “But I told the security guards to maintain strict enforcement to ensure the public health and safety of the whole community, even if the price is some complaining.” 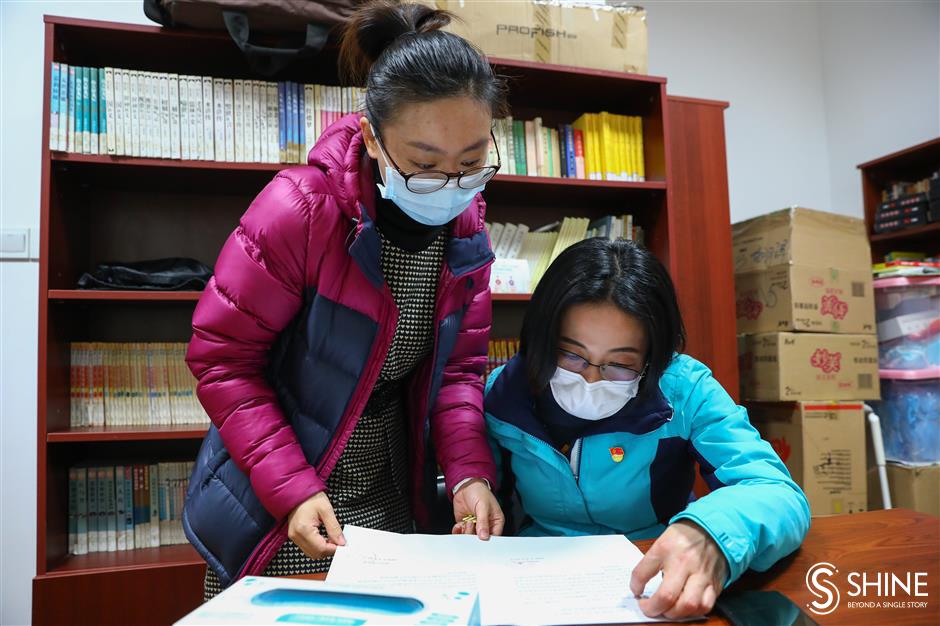 As Chen arrives at her office, officials show her the registration forms collected from residents who returned the previous evening through any of the five residential gates. Some of them were forms issued by civil affairs officials registering foreign arrivals at airports.

Chen and her colleagues sort through the information, comparing it with data on their computer system.

Zhu Hui, neighborhood committee director, and a nurse prepare discharge documents for families who have completed the 14-day home quarantine.

Around 8:40am, they began taking those documents to residents’ doors – including a family who returned to Shanghai from South Korea on February 27.

“You’ve completed 14 days of home quarantine,” Zhu tells them after the nurse has taken the family members’ temperatures. “Thank you for your cooperation and your contribution to our work on preventing the spread of the coronavirus!”

The documents are necessary when they return to workplaces and schools.

The family are so happy to be free from confinement that they immediately take a walk outside.

“We have been confined in our apartment for 14 days and it feels really good to walk around in the sunshine,” mother Chiang Jo-fei told Shanghai Daily in fluent Chinese. “Home quarantine was not difficult for us. It made us feel that Shanghai is a safe place. The neighborhood committee, friends and colleagues sent us everything we need, so there was no inconvenience at all, except perhaps that I had to stop my fitness club program.” 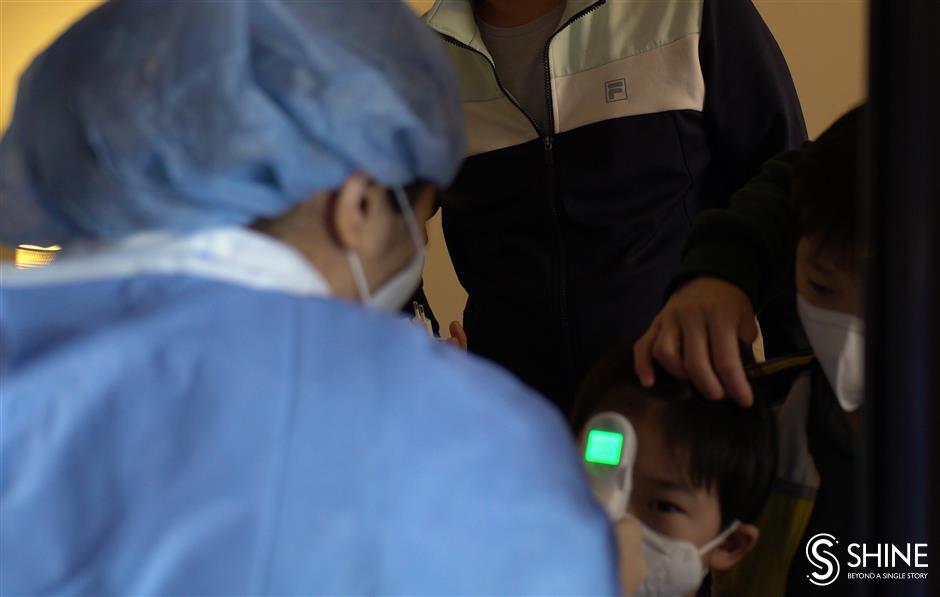 A nurse takes a boy's temperature before he finishes home quarantine.

By the time Zhu returns to the office, Chen and her colleagues have identified four South Koreans who arrived late the previous night. Though they have signed quarantine promises at the gate, committee members will visit their homes to reiterate quarantine rules and make sure they understand them.

Under current measures, people arriving in Shanghai from overseas are classified by customs officials at the airports into three categories, according to their health condition and travel history. Residents who can return home for self-quarantine have to register their information with civil affairs officials in the districts where they live. That information is then sent to subdistrict and neighborhood authorities.

Arriving by chartered bus or private cars, the new returnees have to register their information again with their neighborhoods and sign a document pledging to abide by quarantine rules. If they return in private cars, the people who pick up them are also subject to quarantine.

A committee official, a nurse and an interpreter set out around 9am to visit the new arrivals.

At the first household, the nurse checks a South Korean man’s temperature, the official explains the rules and the interpreter translates them into Korean.

“You cannot go out of your door during the quarantine period,” the official explains. “No need to worry. You can shop online and we will deliver the parcels to your doorstep. Please put your garbage at the door between 1-3pm every day. Our workers will come to collect it.”

A paper version of the rules, both in Chinese and Korean, is also given to the householder, along with some disinfection tablets.

The householder is told to scan QR codes to join two WeChat groups – one for reporting his own temperature twice a day and another for seeking help from the community if needed.

The man is very cooperative and thanks them before they leave. 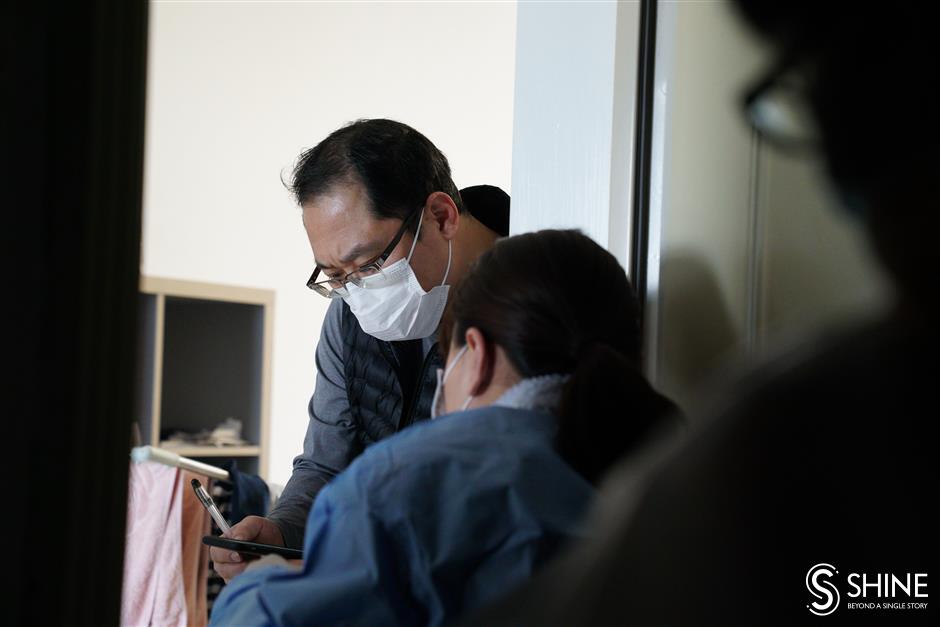 A neighborhood committee official, a nurse and an interpreter visit a new arrival to reiterate quarantine rules.

At the second household, a problem. The information the committee received from airport forms turns out to be wrong. At the address registered in the health declaration form lives a family who have already been discharged from quarantine. No one seems to know the registrant’s name.

“Sometimes registrants give wrong addresses,” Chen says. “They might have lived there once but moved but are still registered at that address. Or they might have just slipped up in filling out the form. No matter. We have to track them down. If they no longer live here, we have to find out where they live now and give that information to the relevant neighborhood committee.”

The man at issue was later found living in a nearby neighborhood.

Any new information is uploaded to the committee’s computer system after the visits.

According to Chen, there are about 3,241 families living in five residential compounds in the Jinxiu Jiangnan neighborhood, and between 35 percent and 40 percent are South Koreans.

“More South Koreans started returning after February 25,” she says. “The peak appeared on February 29, with a total of 48 families back.”

At the time of Shanghai Daily’s visit, more than 400 foreigners in the neighborhood were under home quarantine, including some who had not left Shanghai recently or returned earlier but decided to stay at home with family members who returned recently.

All this processing has placed a big burden on the neighborhood committee. On a peak day, five groups of committee members may spend a whole day visiting households, according to Chen. 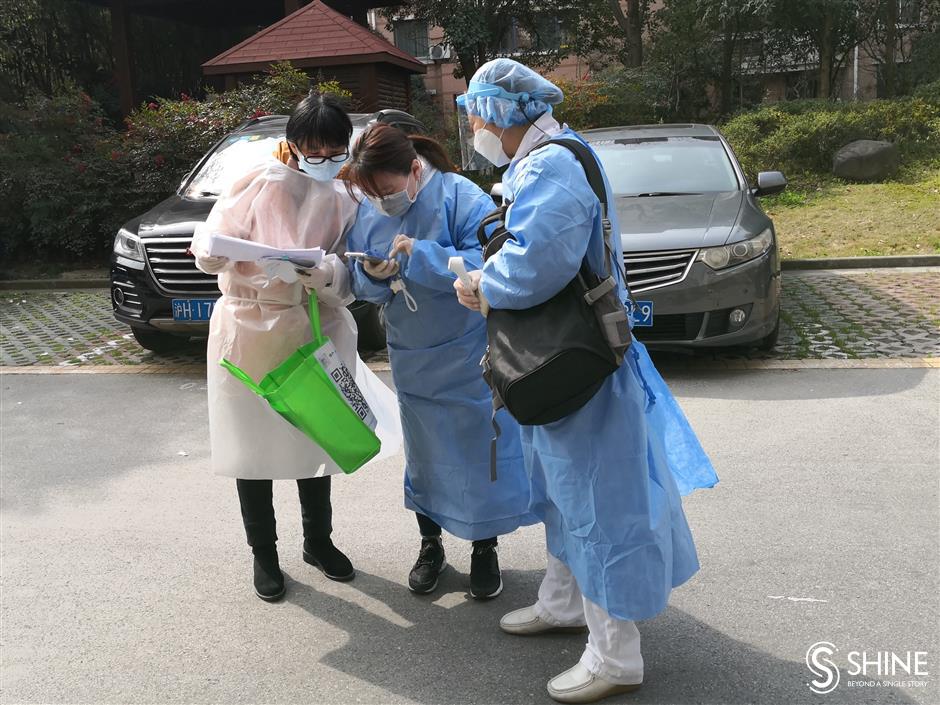 The neighborhood committee official, the nurse and the interpreter check information of new arrivals.

Shanghai Daily witnesses how the latter case is handled.

Chen said she had been told by a resident that a South Korean man who was supposed to be in quarantine has been seen outside his apartment. She checks the surveillance video in the building’s elevator and finds that the man took the elevator from his home on the seventh to the first floor, which is against the quarantine rules.

Park Chang-joo, another South Korean resident, is asked to accompany Chen to the man’s home to reiterate the rules and inform him of the seriousness of his breach.

“South Koreans feel more comfortable when talking to a countryman,” she explains.

At the doorstep, the man says a parcel for him was left on the first floor, so he had to go down to pick it up.

Chen tells him, through the interpreter, that he should have sought the help of committee workers or volunteers.

Park helps the man link up to a WeChat group for South Koreans so he can communicate with compatriots if he needs help.

“All of us are willing to lend a hand when those in quarantine need help,” Park says. “People are even willing to interrupt meals to help deliver parcels if they are needed immediately.”

The man promises he won’t violate the rules again. 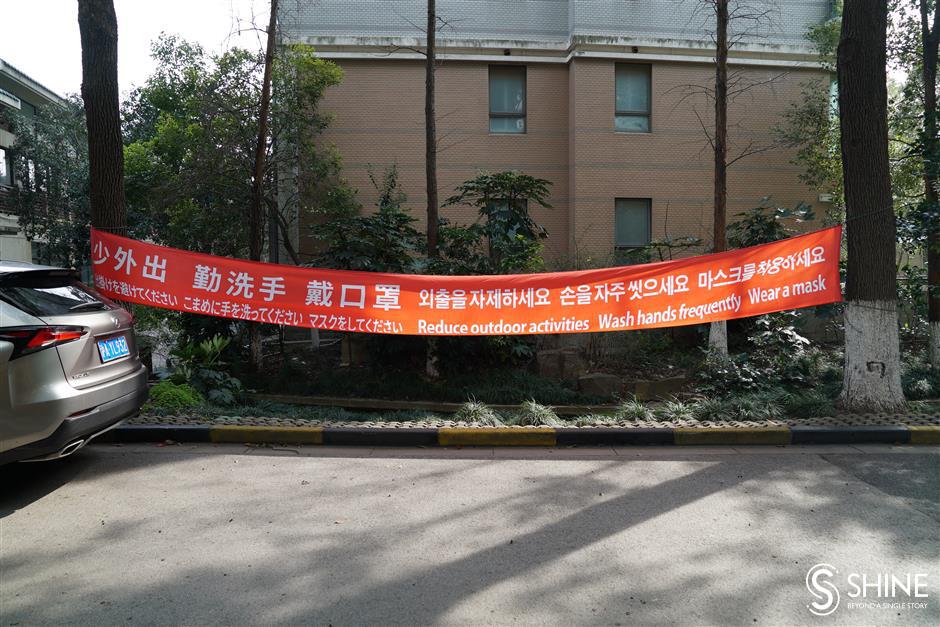 After handling the violation, Chen walks around the neighborhood to inspect work being done in every compound. She usually does this twice a day. En route, she thanks security guards and volunteers for their work.

“South Koreans and Chinese who can speak Korean are especially helpful in our neighborhood,” she explains. “They translate epidemic control policies, health declaration forms and other notifications into Korean. They help spread the word so that everyone is aware of the situation and the precautions being taken.”

Park asks his compatriots who have returned and been quarantined to write down their experiences so they can be shared with those planning to return.

With the recent increase of returnees, a lack of translators has become a problem. Volunteers cannot work around the clock. Hongqiao Town authorities have hired some translators to fill in the gaps, Chen says. 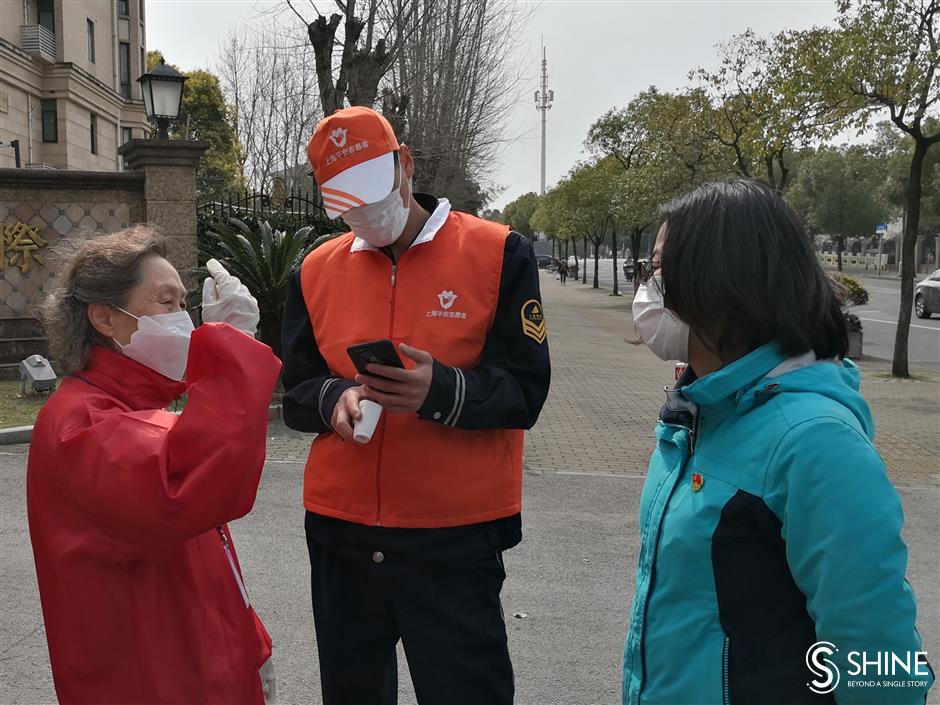 Quarantined families need food and other daily necessities. Each compound gate has shelves where deliverymen can leave parcels. Residents not in quarantine can come to pick up the packages themselves. For those in self-isolation, security guards deliver parcels to doorsteps without coming in contact with householders.

“We have to deliver at least 200 parcels a day,” says Yan Tingwei, a security guard team leader at Taoranju, one of the five compounds in the neighborhood. “Some families order take-outs for each meal, and some like late night snacks.” 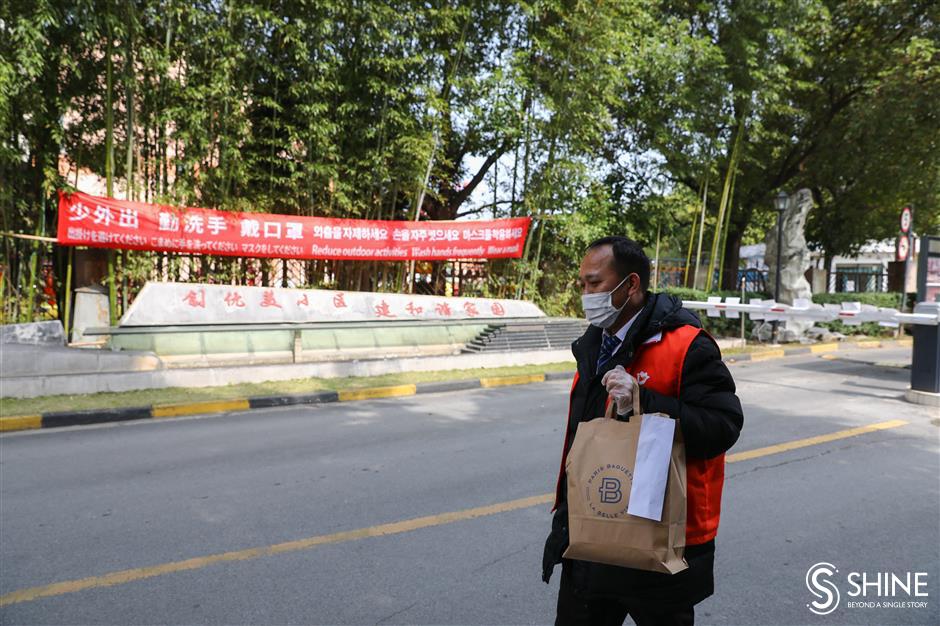 Yan Tingwei, a security guard team leader at Taoranju, delivers a parcel to a quaratined family. 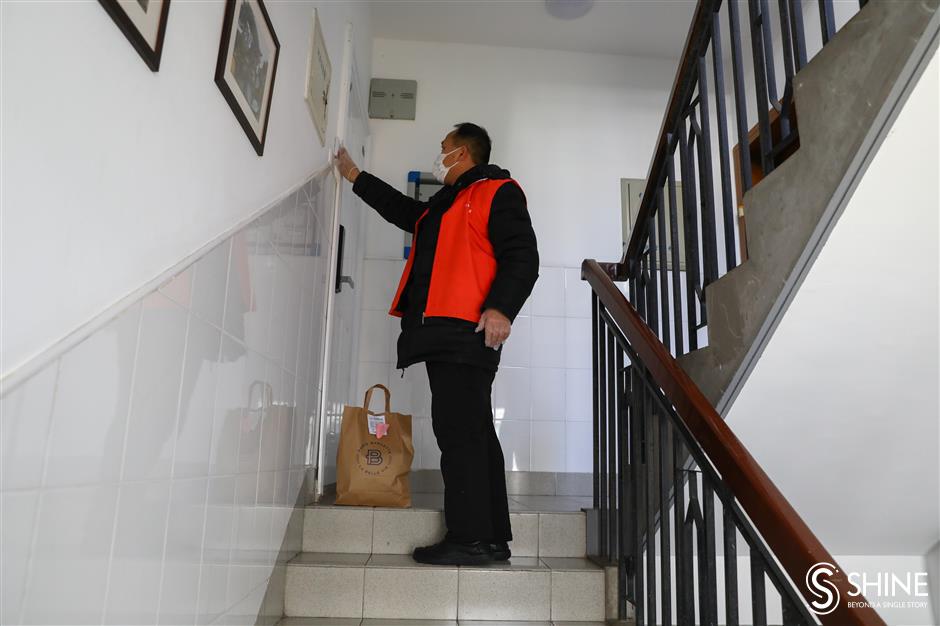 Waste is collected between 1-3pm every day from those in quarantine. A cleaner visits each of the households to disinfect the waste before it is sent for special processing. Volunteers have been enlisted to help out.

“Parcel delivery and waste collection are strenuous work,” says Chen. “In Taoranju, for example, half of the 60 buildings don’t have elevators and our people have to climb stairs.” 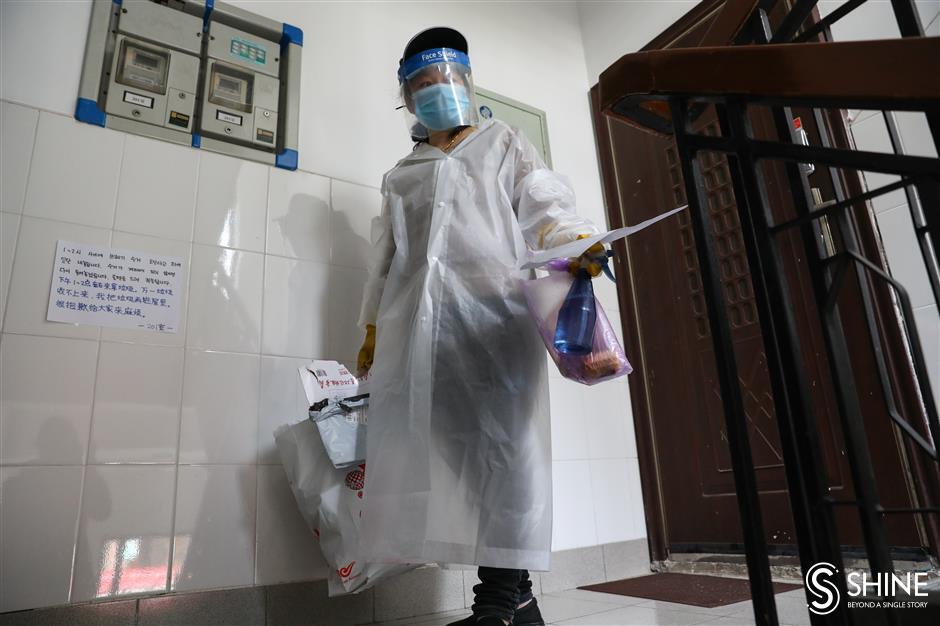 A volunteer collects waste at the door of a quarantined family.

Back in the committee office, Chen and her colleagues are identifying residents who will complete their quarantine the next day. Discharging plans are mobilized.

“There are 63 people to be discharged tomorrow, and it would take us too long to complete door-to-door work,” Chen says.

So the decision is made to have a nurse check temperatures in each home and then ask householders to go to designated places to pick up discharge letters and passes.

After that is decided, interpreters call each family to inform them of their discharge and the procedure to be followed. 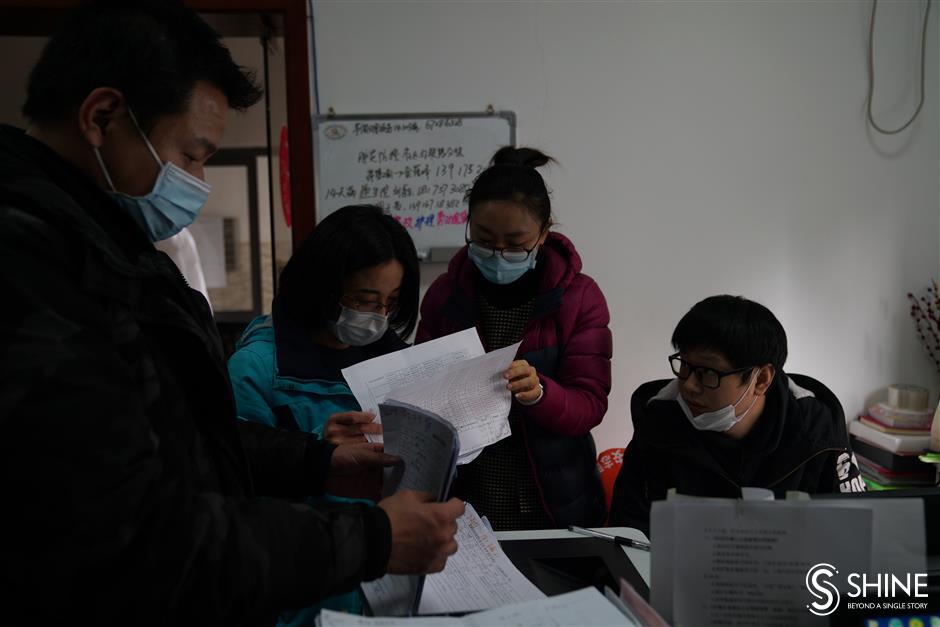 6pm Another day of work completed

Chen and her colleagues end their work at about 6pm. It’s a bit earlier than usual because there are no returnees on this particular day.

“We expect our workload to drop sharply in a few days,” she says. “Thanks to the efforts of the whole community, no confirmed cases have been found in our neighborhood now.”

But it has been an arduous effort.

“I was so nervous at the beginning of the outbreak that I couldn’t sleep at night,” Chen confesses. “But our team has been well trained and all challenges can be handled.” 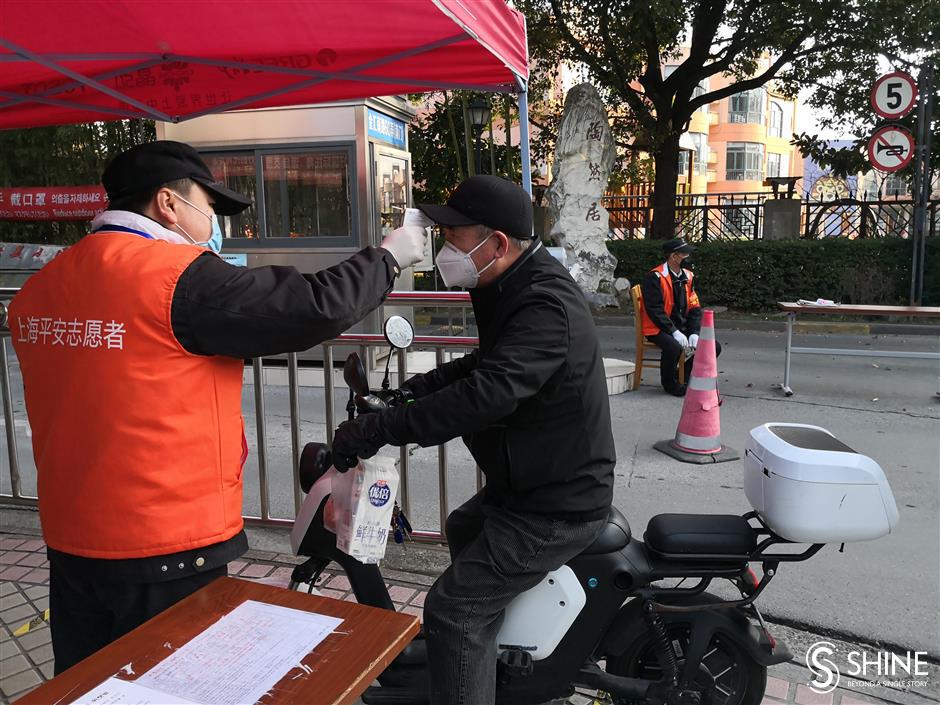