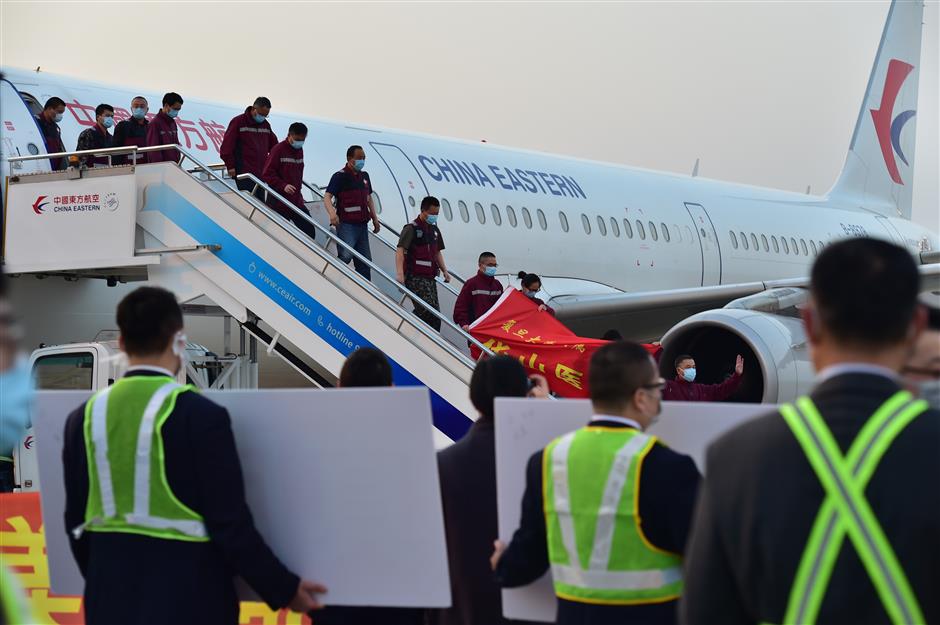 Upon arrival at Hongqiao airport, Zhou Chenghui from Shanghai East Hospital was anxious to go home to hug his wife and newly born daughter … but he couldn't.

He and his fellow Shanghai medical team members must be quarantined for 14 days after returning from Wuhan, heart of the novel coronavirus outbreak.

Zhou left for Wuhan on February 4, just two weeks after his daughter's birth. He hugged her only once at the hospital and then plunged himself into the flight against COVID-19.

"I feel sorry for them," said Zhou, who was in charge of supplies and logistics for the hospital’s team in Wuhan.

The 47 members from Shanghai East and Huashan hospitals have been fighting the virus in Wuhan since early February. They include doctors, nurses, pharmacists and support staff.

Shanghai Party Secretary Li Qiang welcomed them back at the airport.

They later took four buses to a designated hotel in Qingpu District for the 14-day quarantine.

Wuhan officials and residents were thankful for their efforts. The hotel where they had stayed presented each of them with a commemorative photo frame that included a letter of thanks and a piece of cherry blossom for which Wuhan University is famous.

"One of our regrets is that we were too busy to see the cherry blossom," said Gao Caiping, head nurse with the Shanghai East medical team. "We will come back next year."

Over 3,000 traffic police officers in Wuhan cleared their way to Wuhan airport and saluted to them. Airport officials bid farewell on the apron and waved to the taxiing aircraft.

"We'd like to thank you all and now we are coming to take you home," Yang Yanting, chief flight attendant, said in Shanghai dialect. 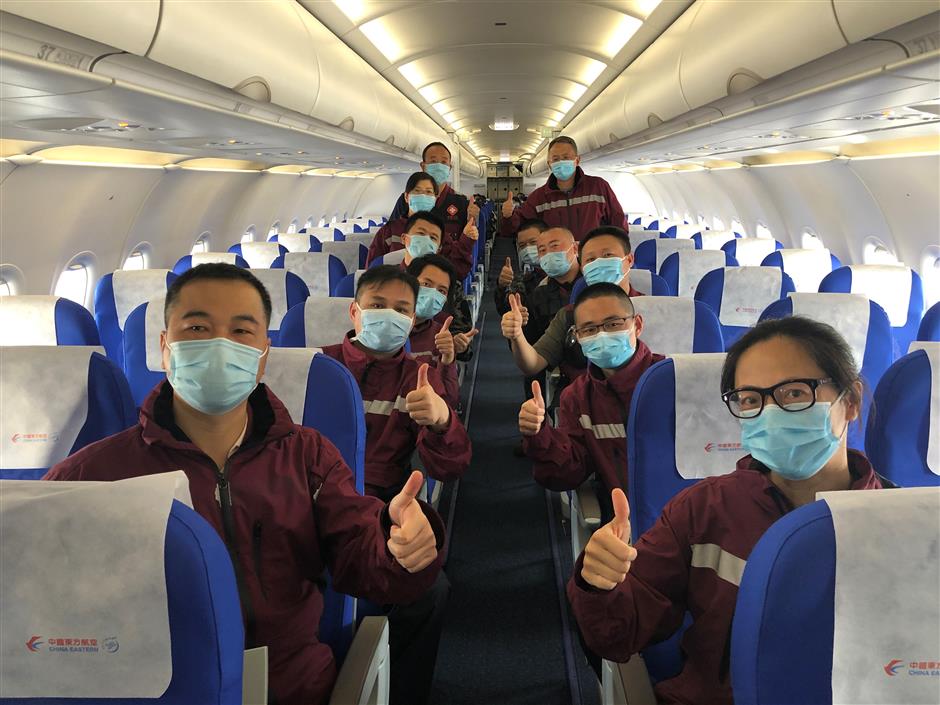 The first batch of returning Shanghai medical team members give a thumbs-up on their China Eastern charter flight home.

Eight members from Huashan Hospital and 18 from Shanghai East Hospital returned to Shanghai in over a dozen vehicles.

Another 26 medical professionals from Huashan volunteered to stay in Wuhan to continue fighting the epidemic.

Wei Yi, a senior nurse at Huashan, said goodbye to colleagues at Wuhan airport. After that, she returned to work at the ICU of Wuhan’s Tongji Hospital.

“I was rather excited to see them off. We've become friends for life after the experience in Wuhan," Wei said.

Shanghai has sent a total of 1,649 medical staff in nine groups to assist Wuhan since late January. The first team set off for Wuhan on January 24, the Chinese New Year’s Eve. All had volunteered to join the team and have been fighting against COVID-19 along with medics from across the nation.

China Eastern has taken over 800 medical workers from Wuhan to their hometowns in Anhui, Jiangxi, Shaanxi and Yunnan provinces.

Over 30,000 doctors and nurses from across the nation rushed to Hubei to help fight the COVID-19 outbreak. Most of them are returning as China is well on the way to containing the epidemic, while others will remain to treated patients. 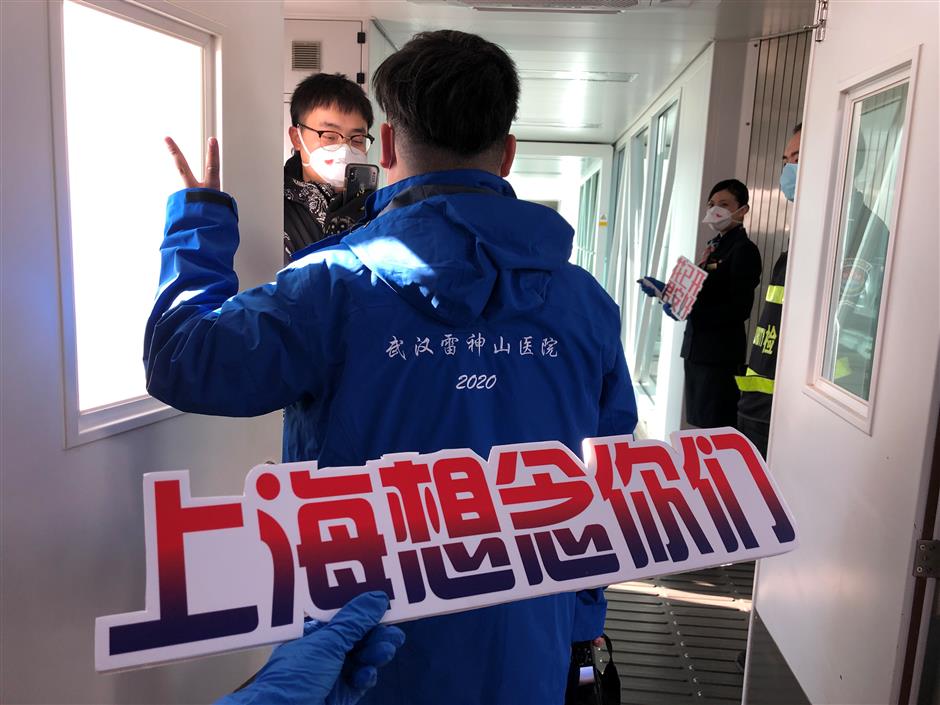 The first batch of returning Shanghai medical team members at the boarding gate. 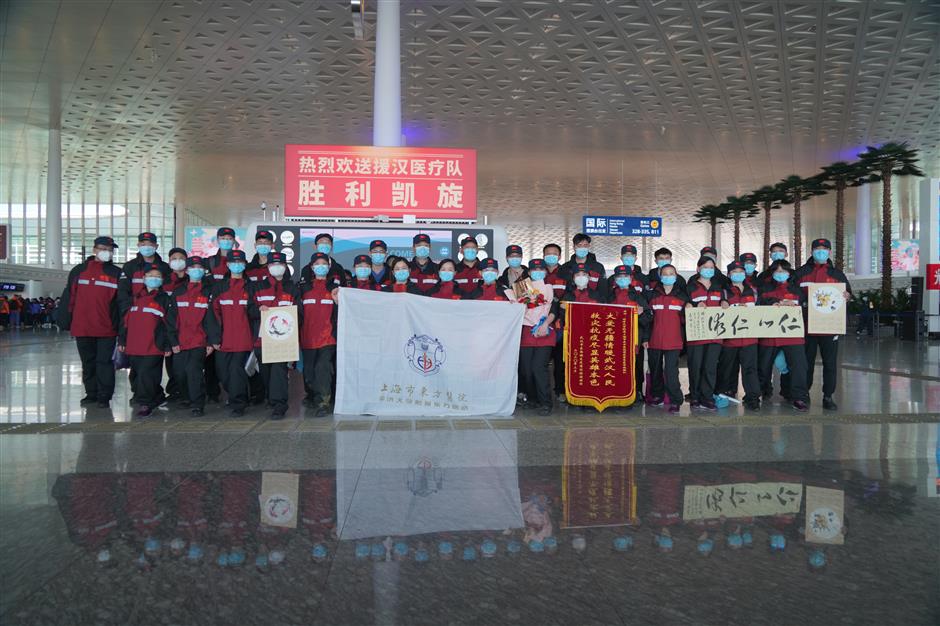 The first batch of Shanghai medical team members returning to the city pose for a photograph at Wuhan airport. 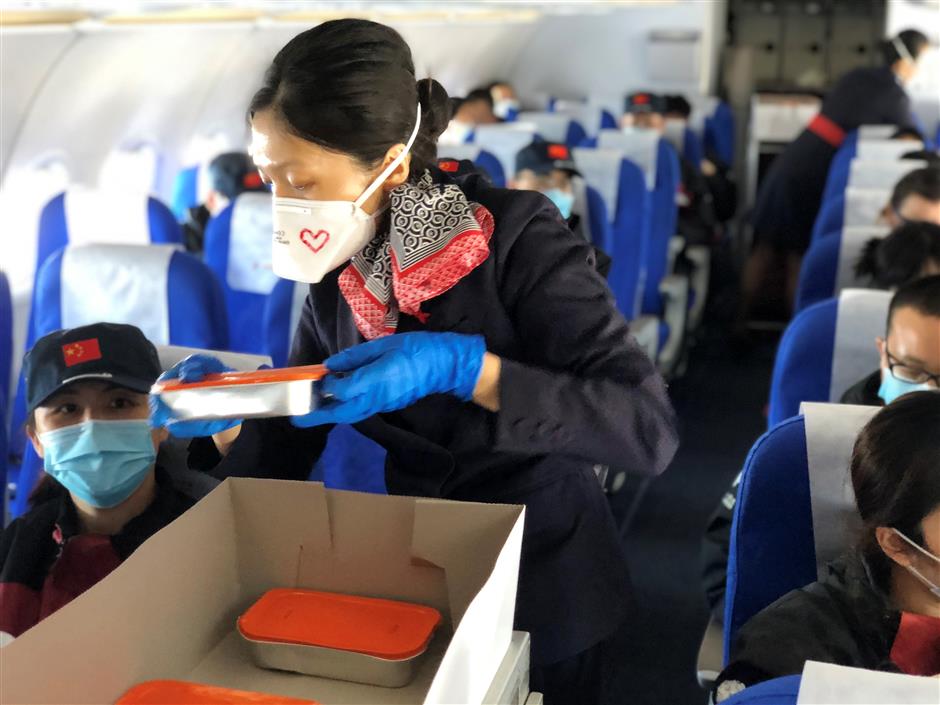 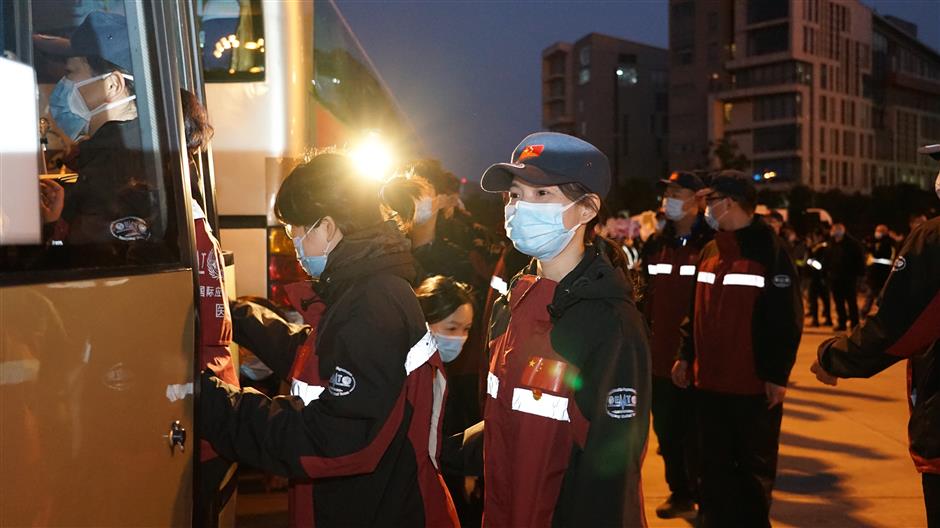 The first batch of returning Shanghai medical team members board a bus taking them to a designated hotel for a 14-day quarantine.