After Wuhan, quarantine is not a problem 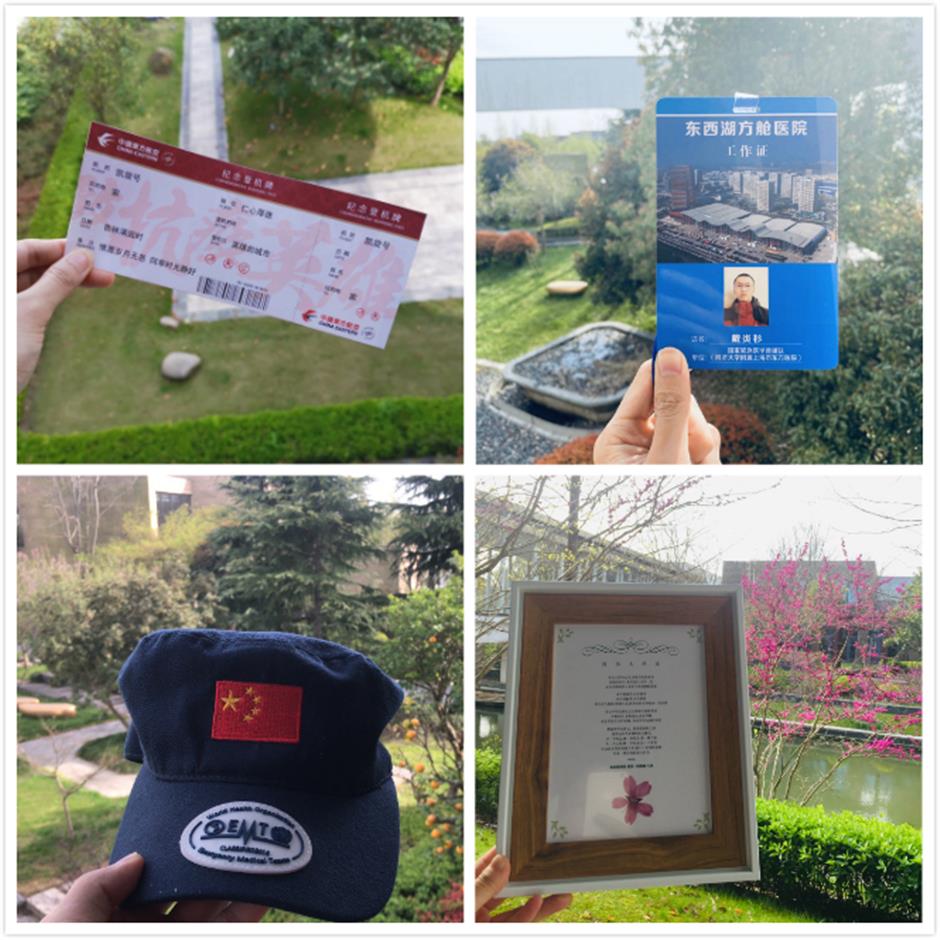 Medical team members in quarantine at a Shanghai hotel share photos they have taken on their balconies.

In quarantine at a local hotel after his return from Wuhan, Huang Guoxin is already thinking about the next stage of his fight against the global pandemic.

"My wife is due to give birth in April. After that, I plan to apply to join the medical team to assist other nations suffering from COVID-19," the senior pharmacist from Shanghai East Hospital said. He plans to name the baby Zuyi, meaning "prevent the epidemic."

He has started to write an essay about his experience in Wuhan.

Fifty-three medical team members from Shanghai East are in quarantine for 14 days at a hotel in Zhujiajiao water town in Qingpu District. They returned to the city on Wednesday.

During quarantine they are not allowed to leave their rooms and must check their temperature twice a day.

"We're doctors, so we check our own temperatures," Huang said. He collects the temperatures of each member twice a day and reports to the hospital. If anyone feels uncomfortable, Huang can prescribe common medicines.

"Everyone feels reborn after they came back and slept for a night," Huang said.

In Wuhan, they usually had to work 12-hour shifts at a hospital renovated from a cultural complex known as the Wuhan Living Room where they fought the virus for 44 days.

Young members of the team sing karaoke using a mobile app. Some use skipping ropes to keep fit while others greet each other from their balconies or take photos to share on WeChat.

Qin Jiawen, a nurse with the team, filmed herself dancing in her room and posted it on social media. The young dance lover finally had the chance to remove her masks and protective suit to showcase her skills. In Wuhan, she once worked in a hazmat suit from 8am one day to 8am the next.

Team members have also been calling their families who had been worrying about them since they set off for Wuhan, Huang said.

"My 7-year-old daughter asked why I didn’t come home, and I told her we had some follow-up issues after returning to Shanghai," Huang said.

After calling his family, Lei Han, leader of the hospital’s medical team, expressed regret that his daughter would be returning to school after his quarantine ended.

"Maybe she can come and let me see her from afar," Lei said.

Ren Huijuan, an emergency department doctor, said she was eager to return to work at the hospital. "My colleagues have been working overtime since we left for Wuhan. I'd like to assist them as soon as possible," she said.

Ren said it seemed odd to her that hotel staff were wearing hazmat suits to serve them. "Usually I'm the one in the suit," Ren said.

The city's health commission prepared 30 masks, a bottle of hand sterilizer and alcohol wipes for each of the members in their rooms. Commission officials also visited and greeted them from a distance.

Food for the team is a blend of East and West styles. Breakfast on their first day, for example, included shengjian, a popular local pan-fried dumpling, fish congee and croissants.

Lunch on Thursday was steak, fried rice with seafood and Italian vegetable soup.

Meals for the team, which change every day, are left at their doors.