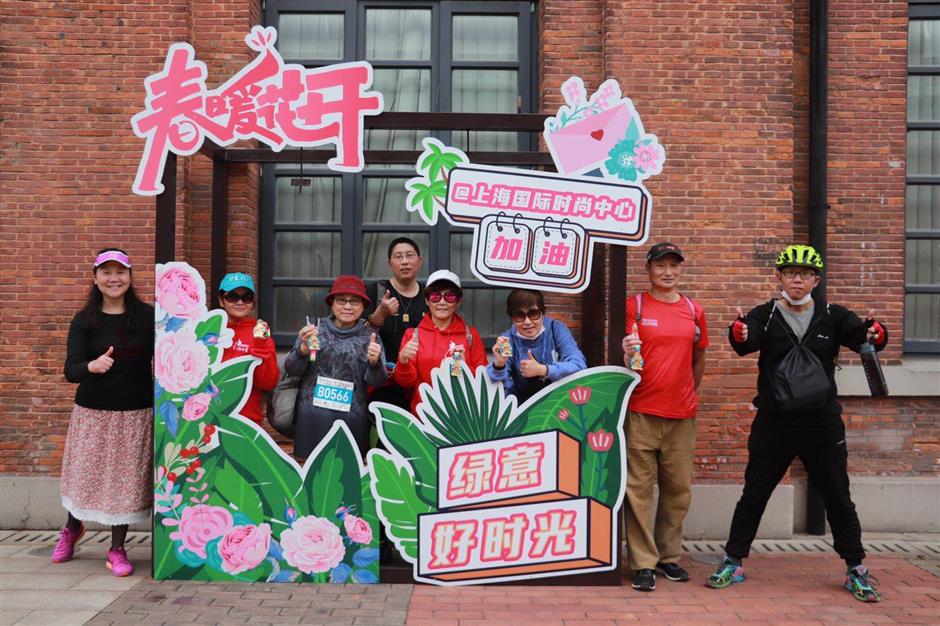 People prepare to take part in a 10-kilometer walk along the Huangpu River waterfront in Yangpu District on Saturday.

Shanghai's tourist attractions and parks received an influx of visitors over the weekend, with some reaching their maximum capacity.

Parks across the city received about 427,500 visits on Saturday, a high since they began reopening on March 13, the Shanghai Greenery and Public Sanitation Bureau said.

Century Park in the Pudong New Area raised its daily limit to 16,000 visitors from 12,000 on the second weekend of its reopening, while all tickets were sold out by 1:08pm on Saturday. On the lawn, visitors played football, skipped rope, took photos of flowers, or just relaxed.

All 33 gated parks in Pudong have reopened.

"To improve efficiency and prevent gathering, people who visit the same park frequently only need to register once," said Ge Chunping, director of the Pudong New Area Greenery Management Center.

At Zhoupu Flower Sea in Pudong, the parking lot was almost full by 11:30am on Saturday, the first day of its reopening. The park features about 2 million tulips of more than 50 varieties.

"The flowers are in full bloom, and the air is fresh, all of which make me comfortable," said a local resident surnamed Yu. "It really is like walking in the flower sea."

Zhujiajiao watertown in Qingpu District reopened on Friday with a visitor limit imposed at around 2pm on Saturday when the number of visitors reached 3,000. Visitors must book via WeChat.

The sunny weather on Saturday brought some parks a surge of visitors, but group tours are still not allowed for now.

To cope with the crowd, Gongqing Forest Park in Yangpu District raised its daily visitor limit to 25,200 from 12,600 over the weekend. It received 19,000 visitors on Saturday, compared with 11,800 last Saturday.

Shanghai's greenery authorities advised potential visitors to learn the rules of each park and check visitor numbers before coming.