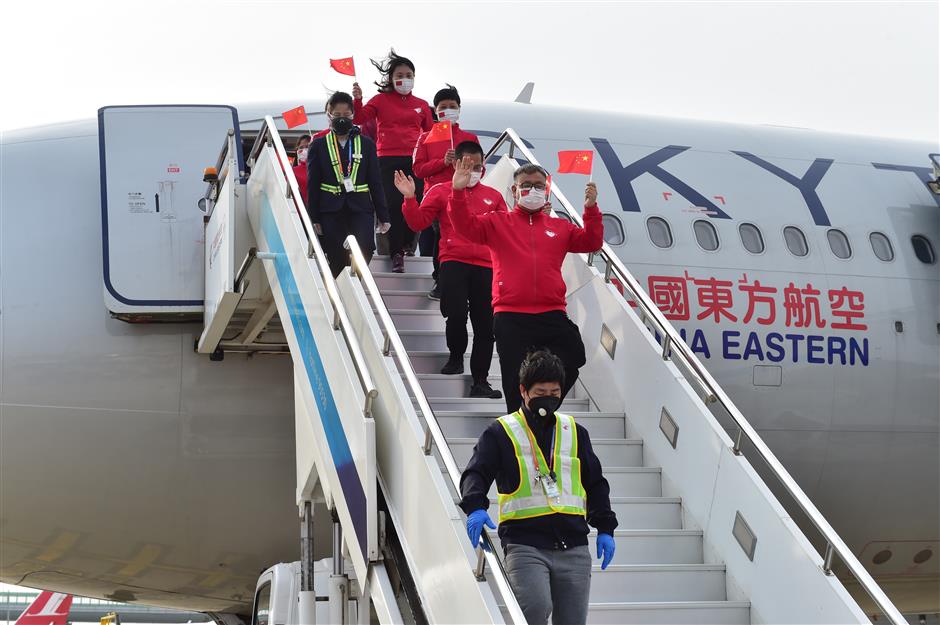 The third medical team from Shanghai disembarks from a China Eastern flight from Wuhan on Sunday.

The third medical team from Shanghai includes 148 doctors, nurses and support staff from 40 local hospitals including Huashan, Zhongshan and Ruijin.

They arrived in Wuhan on January 28, the third day of Spring Festival holiday and treated 332 seriously ill patients at Wuhan Third Hospital. Under their care, 278 patients have recovered.

The ICU operation by the Shanghai team and the hospital was shut down on March 16 after all the patients were either discharged or transferred.

"We just did our duty as medical workers," said Chen. "I hope we go back soon, without masks, to visit the tourist sites in Wuhan."

Chen participated in the fight against SARS in 2003 and went to support Sichuan Province after the Wenchuan earthquake in 2008.

Wuhan citizens, hotel staff and volunteers showed their gratitude in farewells to the medical team. Residents shouted "thank you" from windows. Drivers honked their horns on the streets.

Tu Guowei, an ICU associate chief physician with Zhongshan Hospital who had pledged to stay in Wuhan until the campaign had succeeded, returned with the team. "My duty is to do my best for each patient," he said.

Tu, along with nine associates from Shanghai, worked in the ICU around the clock.

Apart from treatment, Tu's team also offered counseling to elderly patients to help them build confidence, which was key to their recovery.

His colleague Zhang Xiaoyun, a senior nurse with Zhongshan Hospital, also returned. She had had her long hair cut off and her head shaved before heading to Wuhan.

"The recovery of each patient made me feel that all the sacrifice was worthwhile," Zhang said. She was pleased with the transformation of Wuhan, from not having enough beds for the sick just a few months ago to the ultimate closure of the ICU. 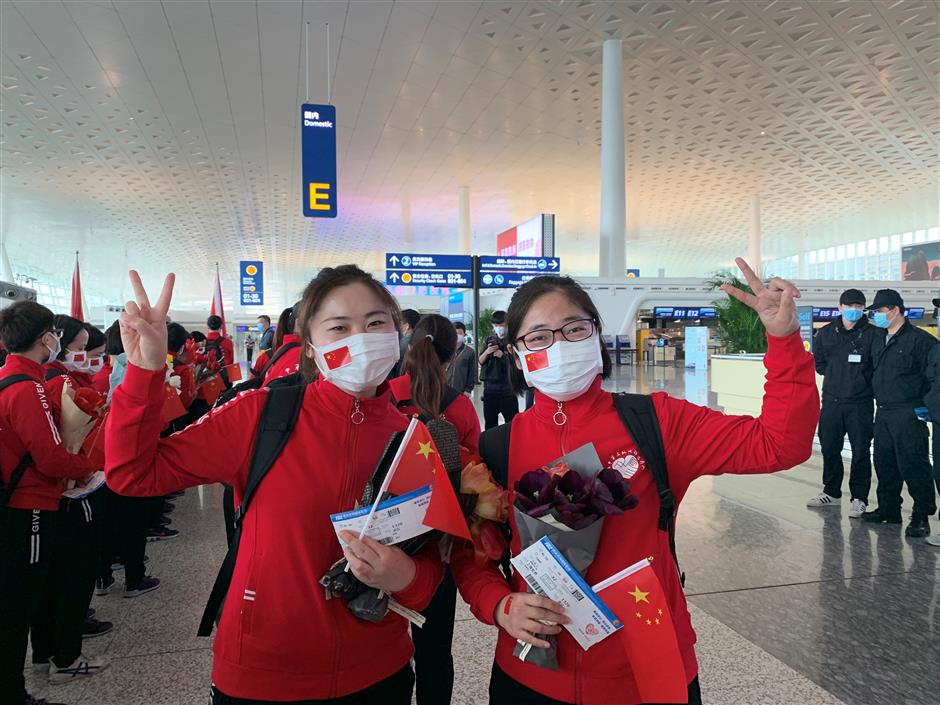 Members of the Shanghai team pose at Wuhan airport before flying back to Shanghai. 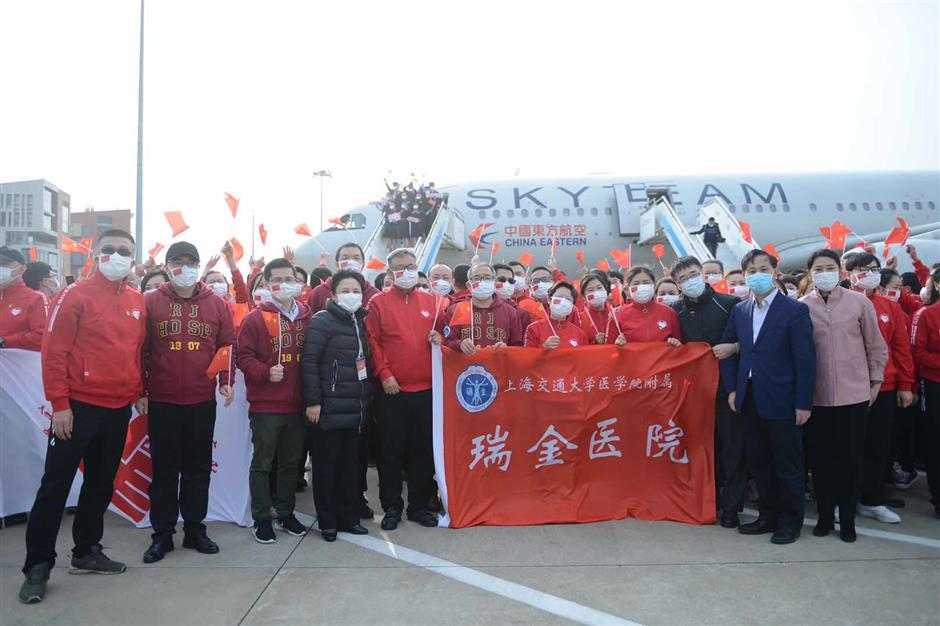 Zhao Xiaoling, a nurse with Renji Hospital, said she missed her family and hometown Shanghai after 55 days away.

"I've had many unforgettable experiences and have formed a deep friendship with my colleagues," Zhao said.

The returnees also included Yu Yuetian, an associate chief physician at Renji Hospital's critical care department. He came to public attention after a photograph of him kneeling on the ground while treating a patient was posted online.

"We've been under great physical and mental pressure in the ICU, but we are heartened by the recovery of the patients," Yu said.

The team, along with six pathologists, eight emergency rescue team members, took a China Eastern Airlines flight to Hongqiao at around 3:30pm, with the same captain who took them to Wuhan on January 28.

"We've had an appointment with the team to bring them back when their fight in Wuhan was won," said Liu Mingfu, the captain.

Flight attendant Zhou Zhenyi was reunited with her cousin, Li Lei, a respiratory doctor with Shanghai Fourth People's Hospital, at the cabin door. She presented White Rabbit, a time-honored Shanghai sweet, to her cousin and other team members.

"My cousin often bought me White Rabbit when I was young. I'd like to welcome him home with one today," Zhou said.

China Eastern deployed five charter flights to take a total of 912 medics back to Shanghai, Kunming in southwest Yunnan Province and Lanzhou in northwest Gansu Province on Sunday. China Southern Airlines has deployed 18 charter flights to bring over 2,700 medical staff back home.

Over 30,000 doctors and nurses from across the nation rushed to Hubei to help fight the COVID-19 epidemic. They began returning last week as the spread of the epidemic slowed. 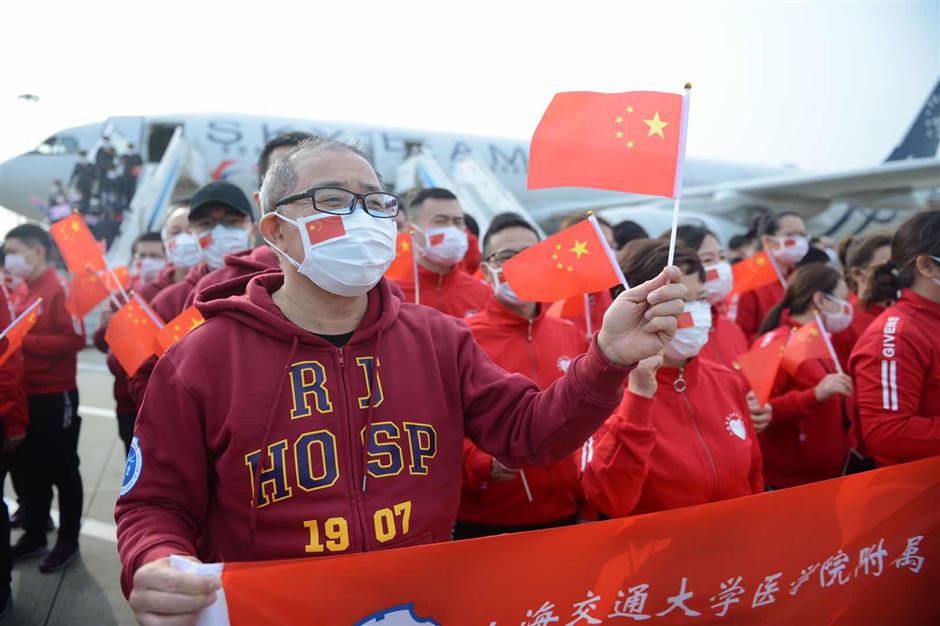 The team from Shanghai's Ruijin Hospital arrives at Hongqiao airport on Sunday.

A welcoming ceremony takes place on the tarmac. 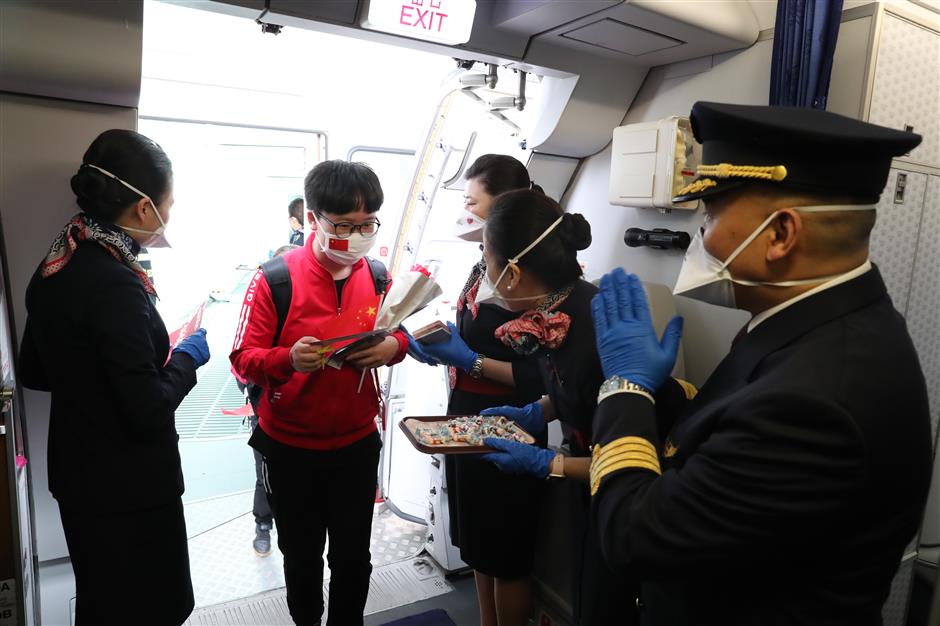 Captain and flight attendants present Shanghai candies to welcome the team onboard.