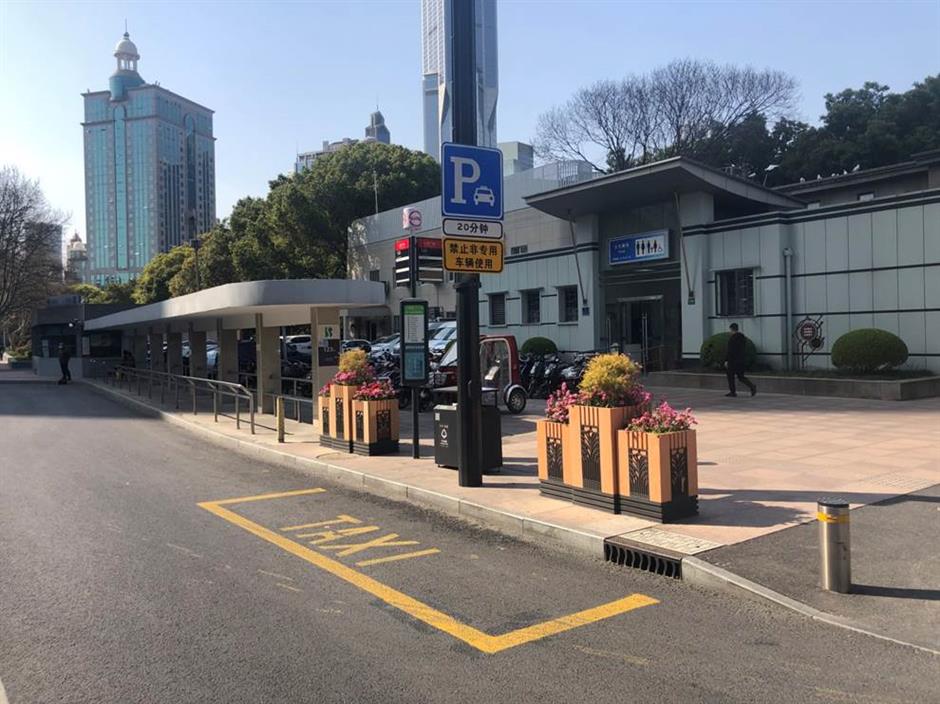 A street parking slot for taxi drivers needing a restroom break near the intersection of Hankou Road and Jiangxi Road M. in Huangpu District.

When taxi drivers need a restroom break, they tend to park at hotels, gas stations and residential complexes when free street parking is not available.

The police are now allocating 500 parking slots near public toilets where cabbies can park for up to 20 minutes.

Other vehicles occupying these spots will be captured on camera and the drivers punished later, as officers can monitor the slots from surveillance rooms at their stations, police said on Monday.

The parking slots, in all Shanghai districts, are either in front of toilets or not more than 200 meters away, and their locations can be found on major Internet maps, police said.

“We have screened all 2,200 public toilets in the city, and the 500 taxi slots are the best we can offer at this moment,” said Chai Jingwen, vice director of the road facility department of Shanghai traffic police.

Chai said police will also advise the department administering street parking lots to leave one or two slots for taxi drivers free of charge to offer more parking choices for them.

Yang Zhenghua, a taxi driver with the Jinjiang Taxi Co who has over 30 years’ experience, welcomed the initiative.

“I remember feeling nervous sitting in my taxi when not being able to find a toilet, so this is a great problem that could affect driving safety,” he said.

However, some drivers said parking so they can eat is a bigger problem for them. There are about 40 street parking spots near restaurants for taxi drivers around the city, but many drivers park for a long time after eating to have a rest, and sometimes the slots are used by other vehicles.

“Many drivers flock to the city’s airports at lunch and dinner time because it’s easy to park there for eating and for a rest,” Yang said.

Jia Jun, director of Jinjiang’s safety department, said the company had told all its drivers not to use the parking slots if they didn’t need to go to the toilet.