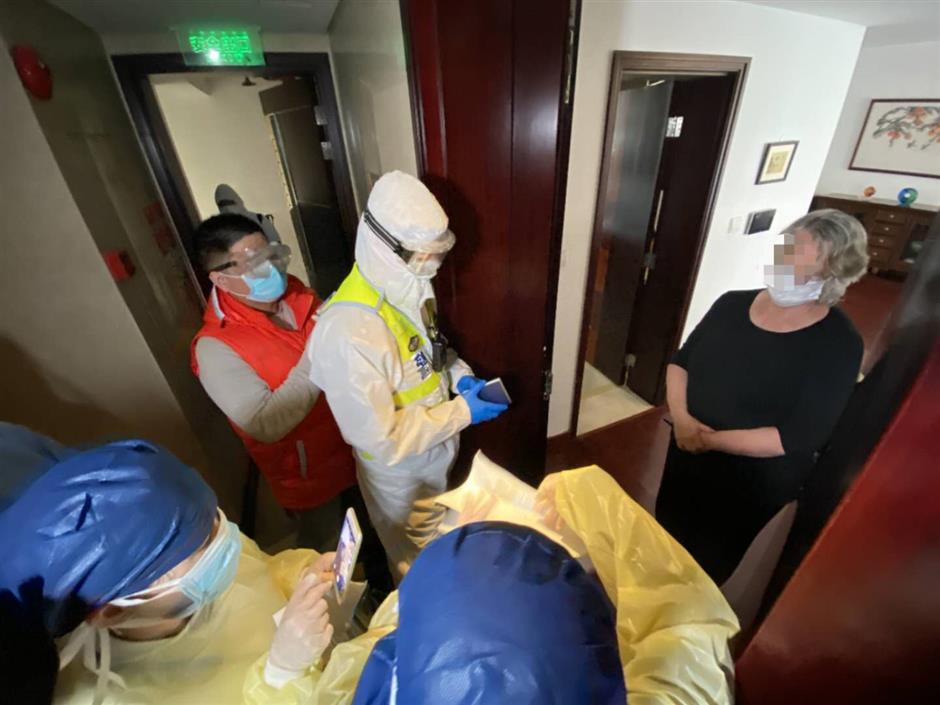 Police officers, health workers and community officials chat with an expat before she begins her home quarantine. 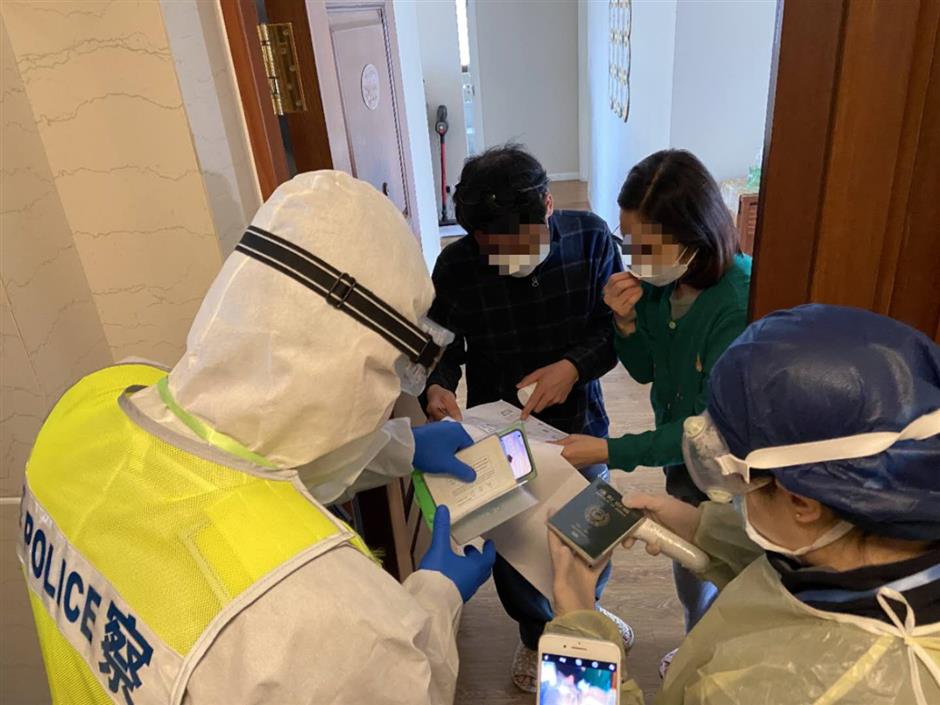 Strict measures have been put in place to ensure that people who have arrived in Shanghai from overseas and are in quarantine stay in their homes.

Police officers, community officials and health workers tell them what is required before the 14-day quarantine period starts. Those in quarantine then have their temperatures checked twice a day, with their trash taken away and their food and parcels delivered by community workers.

Each quarantined family has a police officer standing by, and police said people who fail to obey home quarantine requirements would be strictly dealt with.

Sensors which can detect when doors are open are in use in several Shanghai districts.

In Minhang, 450 sensors have been installed since the end of February, a third of them in Hongqiao Town.

“Data from the sensors are forwarded to police officers and community officials in real time for them to check with the residents under quarantine, while the sensors themselves won’t sound alarms or affect neighbors,” said Tang Kaibin, vice head of Hongqiao Longbai Police Station.

By Tuesday, no violation of home quarantine had been detected by the sensors, police said.

Residents were aware of the installation of the devices, but some had expressed concerns at first, police said.

“We explained to such people that the measure is taken in special times for the health of everybody, and the sensors won’t be there forever,” said Chen Qiuhua, a community official. “Most people understand that.”

In the Changning District area administered by Hongqiao Road Police Station, which has a high concentration of expats, 629 people from 27 countries in 444 households are under home quarantine.

Chen Bo, an officer at the station, said he received a message in a WeChat group with property management workers on March 17 that a relative of a family under quarantine had visited the family of four at home.

When Chen and community officials arrived at the family’s apartment, the relative, an elderly woman, was about to leave, but was stopped.

“I told her that she could be punished if she left and ended up infected, and ordered that she be quarantined with the family she visited,” he said.

Every quarantined person has to spend 14 days at home, without exception.

Chen said a Japanese expat who had been in quarantine for 13 days called him on March 19 asking to be dequarantined as he had an important contract to sign and because his son was arriving in Shanghai from the UK the next day.

Chen declined his request and suggested that if his son tested negative for the coronavirus, he could be quarantined with him at home, but it would mean another 14 days’ quarantine for him.