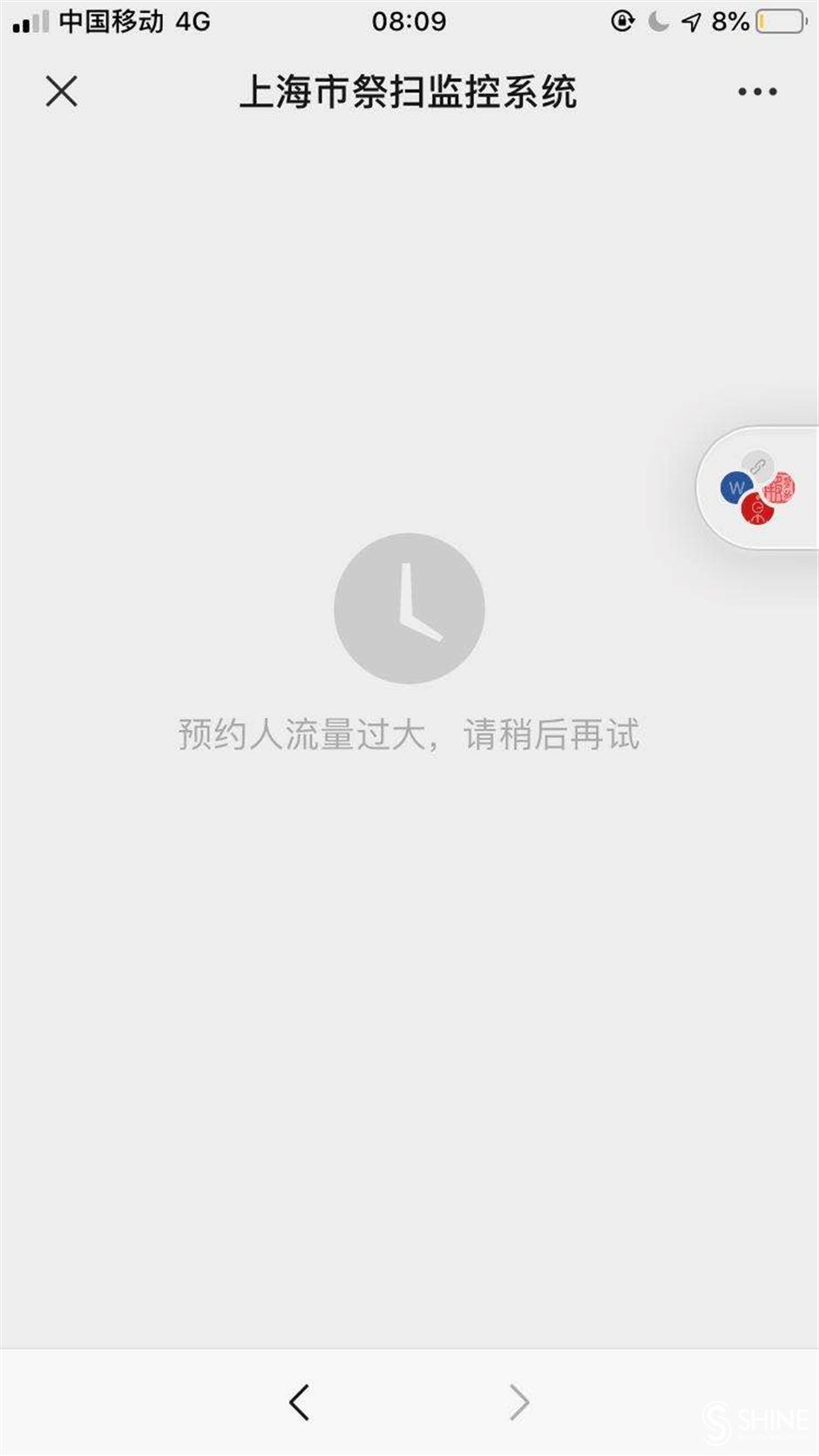 Qingming, on April 4 this year, is when Chinese people clean family tombs and pay tribute to their ancestors. This year, visitors to cemeteries will be controlled via online reservations to prevent crowds amid the coronavirus pandemic.

The city’s 54 cemeteries and columbaria began taking reservations on their WeChat accounts at 8am on Thursday with four two-hour time slots available each day between March 28 and April 12.

Only half of the systems worked in the morning as they should, according to the funeral and interment department of the city's civil affairs bureau, which blamed heavy traffic for the problems.

By 4pm, 68,500 residents had made reservations, the Shanghai Civil Affairs Bureau said, and almost all slots on April 4, 5 and 6, the Qingming Festival holiday, have been fully booked,

Because of the high number of people trying to reserve places, some accounts became gridlocked, the bureau said, but have now mostly returned to normal.

Echo Jiang, a Putuo District resident in her 20s, was among those who struggled to make a reservation.

"It's a tradition for me and my parents to sweep my grandfather's tomb at Binhai Guyuan Cemetery in Fengxian District every year, and my father asked me to make the reservation because he didn't know how to do it," Jiang told Shanghai Daily.

"I learned how to make a reservation on Wednesday, and set an alarm to wake up early on Thursday," she said.

"I had been trying to make a reservation since 8am. At first, the page was shown as non-existent, and then it failed to load again and again as I refreshed it," she said.

Jiang said that a few times she was able to select a time and date, but she either failed to receive a verification code or the service crashed before it could proceed further.

The most sought-after date for tomb-sweeping was April 4, the exact day of the festival.

"We offer 5,000 reservations for each of the four time slots, and by 8:30am on Thursday, the slot between 8am and 10am on April 4 was fully reserved," said Chen Beiqi, assistant manager of the Shanghai branch of Fu Shou Yuan International Group, which operates cemeteries in around 30 Chinese cities.

Less than 30 minutes later, the time slot between 10am and noon for April 4 was also completely booked, Chen added.

"We are telling tomb-sweepers to avoid peak days to pay their visit," he said.

Wang Xiaoming, a resident of Hongkou District, had better luck than some. She was determined to book a visit on April 4 to Baofeng Mingyuan Cemetery in Baoshan.

"This is the first Qingming Festival since my grandfather's urn was interred, so our family has to pay a visit on the day," she told Shanghai Daily.

Fortunately, she managed to secure a reservation. "I saw the reservation vacancies were fully booked within three minutes," she said.

A maximum of 10 participants will be allowed at each interment site.

Visitors will need to have their temperatures checked and present their health QR codes and reservation confirmation for entry, said Zeng Qun, deputy director of the civil affairs bureau.

Cemeteries have been ordered to set their reservation limits based on their capacity, and priority is given to those who have urns to inter, the bureau said.

Burning items such as tinfoil and setting off firecrackers is banned.

"Online tomb-sweeping platforms have been opened by cemeteries in the city via their websites or WeChat accounts, enabling residents to pay tribute to their relatives online," Zeng said.

"People are advised not to visit cemeteries and columbaria until the epidemic ends," Zeng added.

Cemetery staff can also sweep tombs for families if requested, following procedures such as cleaning graves, bowing and laying flowers. Photographs can be provided.

Shanghai's cemeteries and columbaria received 2.19 million tomb-sweepers during last year's Qingming Festival, according to the bureau. Authorities reported severe congestion on roads and expressways leading to such sites.