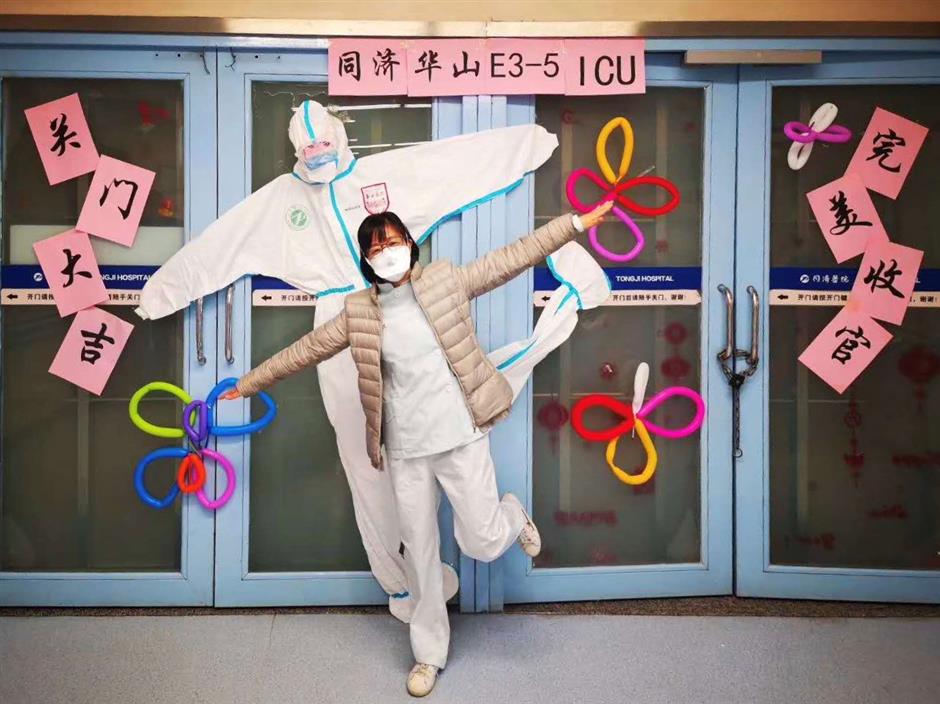 A medic from Huashan Hospital took a picture as the last patient was discharged. 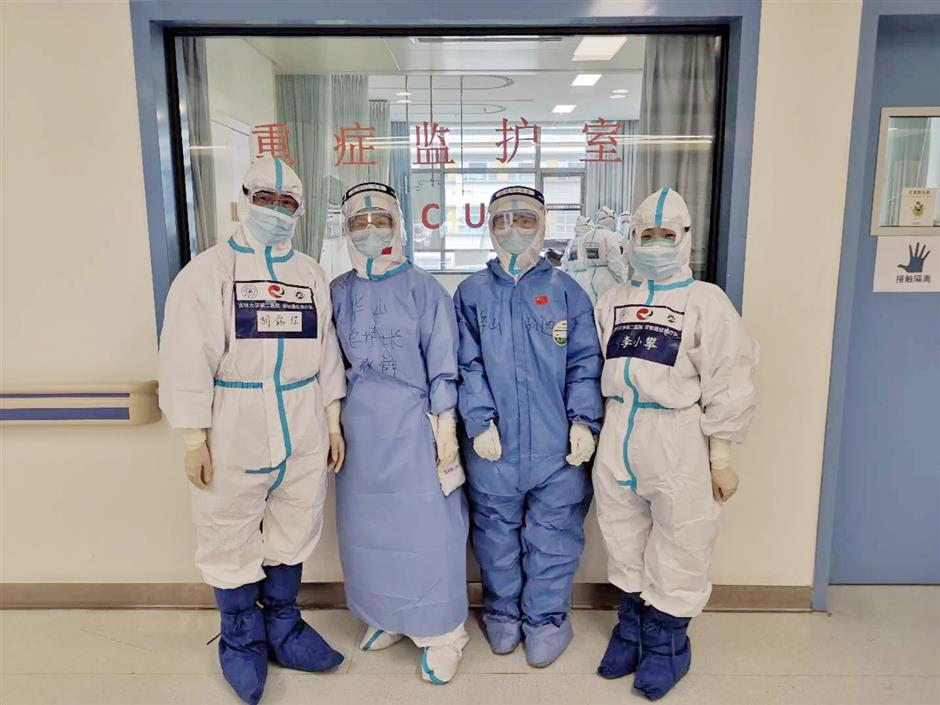 More Shanghai medics will set off home from Wuhan on Tuesday.

Huashan Hospital sent 273 medical workers in four batches to Wuhan since Chinese Lunar New Year’s Eve on January 24. Over two months, they’ve been fighting the novel coronavirus on the frontline in Jinyintan Hospital, the Wuhan Third Hospital, the Wuchang temporary hospital converted from Hongshan Stadium and the Guanggu branch of Wuhan Tongji Hospital.

To date, only 24 have returned to Shanghai. The others will return on Tuesday as the last ICU ward operated by Huashan in Wuhan was emptied on Monday. After arrival, they will be quarantined in a hotel for 14 days for medical observation.

“We will come back and reunite with our families. We can tell them that we had put up a desperate fight here,” said Ma Xin, vice president of the hospital.

Though saying goodbye, medics in Shanghai and Wuhan have formed deep friendship.

A letter written by Renmin Hospital of Wuhan University states: “You resolutely put on your white coat armors, left your homeland and joined hands with us in the anti-virus fight. We pay the highest respect and sincerest thanks to you and your families.”

Hundreds of medics from 10 cities and provinces, including Shanghai’s Huashan and Wuhan’s Renmin, have together run the Wuchang temporary hospital for 35 days, receiving 1,124 patients. It closed on March 10 after the last batch of 49 patients were discharged.

“Working night and day, seizing every second, you spared no effort to save and treat patients and you’ve done such a great job, reporting no death and no infected cases of medics,” the letter read. “After the ‘winter’ ends, we invite you to visit Wuhan.”

In a letter written in reply, Huashan expressed gratitude for having received great help. “Love and hope always spread faster than a virus. We hope our friendship will last long,” its letter said.

Outside the Guanggu branch of Wuhan Tongji Hospital, 17 cherry trees have been planted, which represent the 17 medical teams, to symbolize the lasting friendship.

On February 10, Huashan took over the 30 beds in the hospital’s ICU wards, the most dangerous place with the most severe patients.

More than 200 medics worked together on treatment plans for patients, especially those with multi-organ failure.

The hospital closed on Monday as the last patient was discharged.

Over the period, Huashan received a total of 75 patients in ICU wards. They had been in highly stressful conditions when 27 out of the 30 patients needed respiratory machines, eight used CRRT (continuous renal replacement therapy) and two used ECMO (extra-corporeal membrane oxygenation).

Nurse Wang Huijuan was among the first batch of four medics sent to Wuhan. Since January 24, they have been working in Jinyintan Hospital for more than two months. She was looking forward to enjoying the spring blossom in Shanghai.

Her co-worker Liu Rong said they had received T-shirts designed and drawn by local children. “I was really touched beyond words. Wuhan is a great city. Let’s pray for Wuhan,” she said.

On Tuesday, 34 medics from the Yueyang Hospital of Integrated Traditional Chinese and Western Medicine will also return to Shanghai. They’ve been working in Jinyintan Hospital and Leishanshan Hospital for over two months.

During the anti-virus fight, TCM has emerged as a powerful weapon. Official statistics show more than 90 percent of novel coronavirus patients in China are treated with TCM.

Nurse Zhang Yan remembered the day when they arrived Wuhan. “Snow covered roads, and it was dark and silent,” she said.

She added: “Now, cars are running again on the roads, and buildings are lit up at nights. I guess patients recovered from the infection are returning home. Trees are sprouting and ‘spring of the anti-virus fight’ is much in the air.”

Fan Min, director of the hospital’s cardiology department said: “People all call us heroes. But we just do what we should do in another place.”

He added: “We are more touched than touching others. We are touched every moment by Wuhan people, including patients, medics, hotel attendants, shuttle bus drivers, volunteers and express delivery men.” 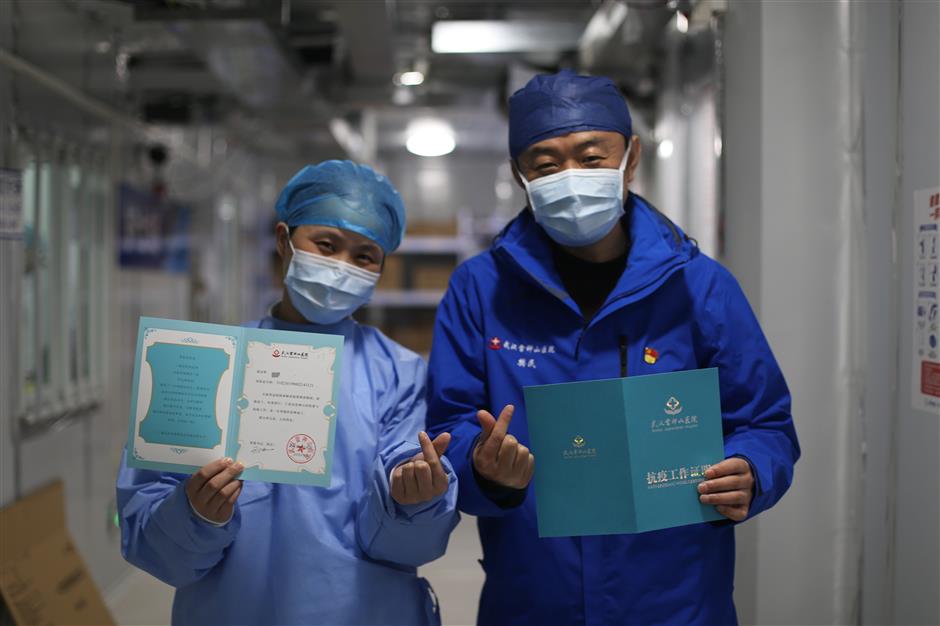 Medics from the Yueyang Hospital of Integrated Traditional Chinese and Western Medicine. 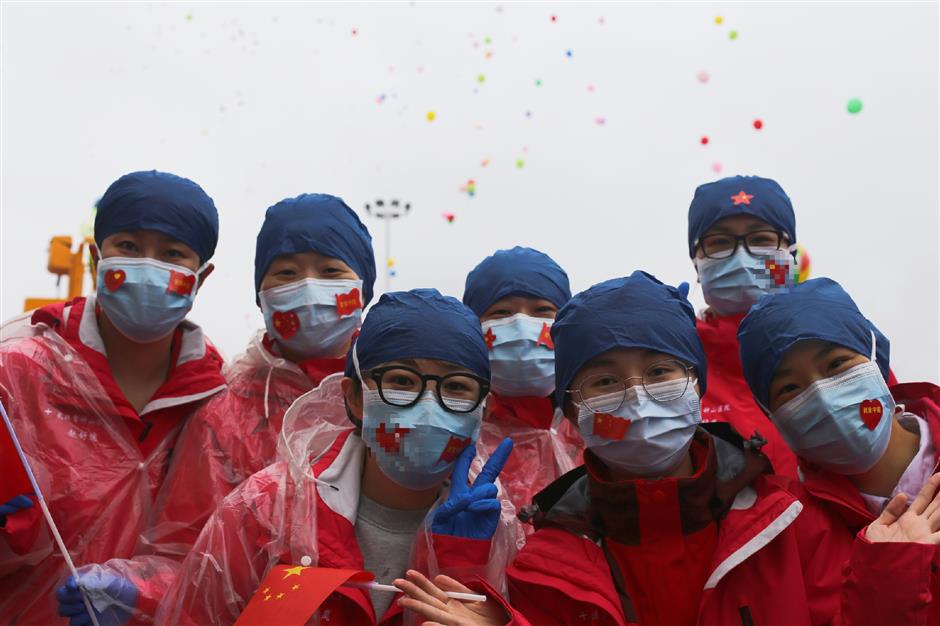 Medics from the Yueyang Hospital of Integrated Traditional Chinese and Western Medicine are happy to be going home.