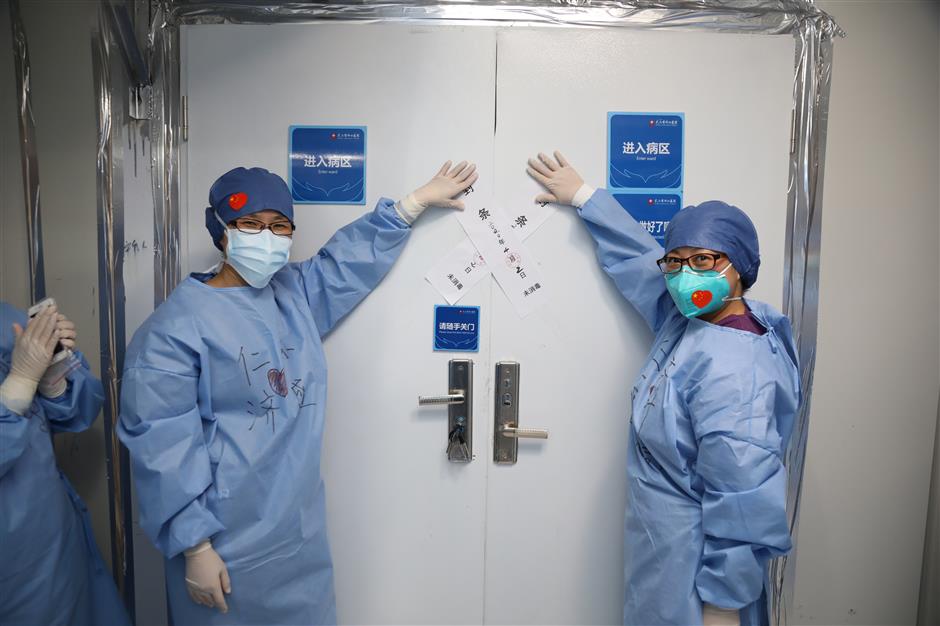 Two medics from Renji Hospital close the ward at Wuhan's Leishenshan Hospital where they were working after their last patient left. 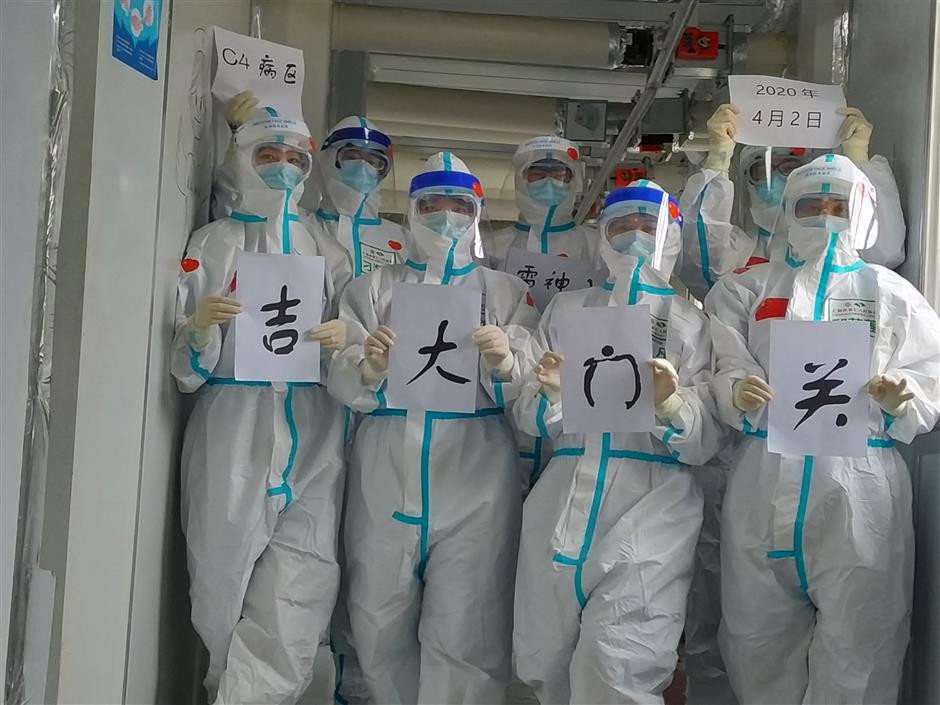 The medical team from Shanghai Seventh People's Hospital celebrate closure of the ward.

Medical workers from Renji Hospital and Shanghai Seventh People's Hospital closed a ward at Leishenshan Hospital in Wuhan on Thursday after the last coronavirus disease patient was discharged.

The ward, which began taking coronavirus disease patients on February 23, had treated 52 patients, 51 of whom had recovered. The other patient was transferred to another ward.

Its last patient, surnamed Zhu, had been transferred to the ward on March 30. After her condition remained stable and she tested negative twice, she left hospital on Thursday.

Following her departure, the medics handed medical facilities, drugs and supplies and patients' medical records over to the hospital. They cleaned and sterilized the ward before leaving.

"Leishenshan Hospital is unique as it was built as a makeshift hospital for treating coronavirus disease patients in the pandemic. Like the patients, we medical workers also hope it can close as soon as possible with all its patients recovered,” said Lin Yan, leader of the seventh people's hospital's medical team.

"Our ward is a barometer of the epidemic. At the beginning, the patients came often and needed to wait for beds. Later, the number of patients requiring hospitalization dropped. In the past two weeks, there were no new patients coming or being transferred to the ward, which proves that the pandemic has been well controlled."

Lin said Leishenshan Hospital now had only tens of patients in four wards and two intensive care units who were being taken care of by the medical workers from Shanghai. 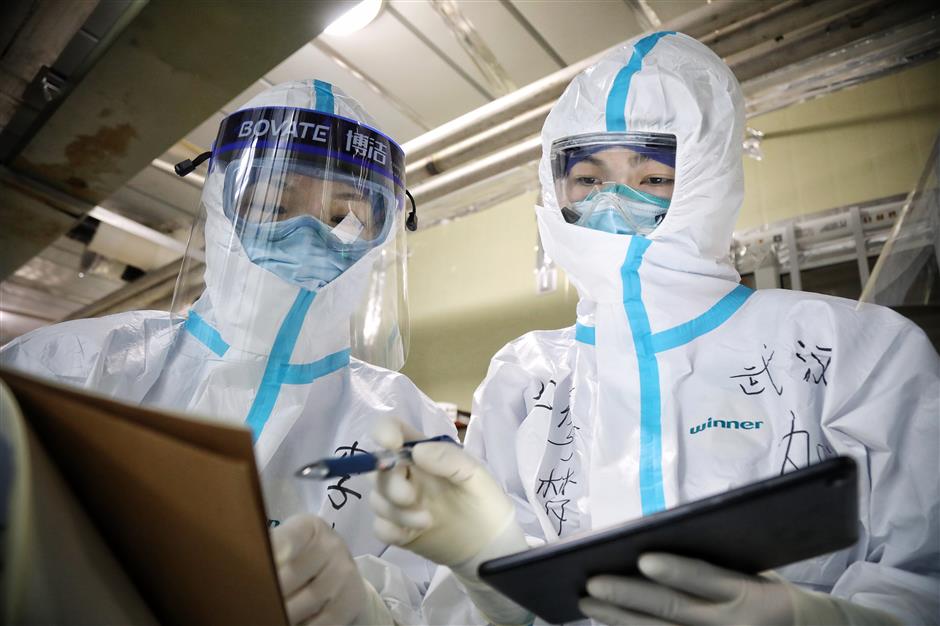 Two medical staff complete patients' medical records after they closed the ward they were responsible for in Wuhan when the last patient left. 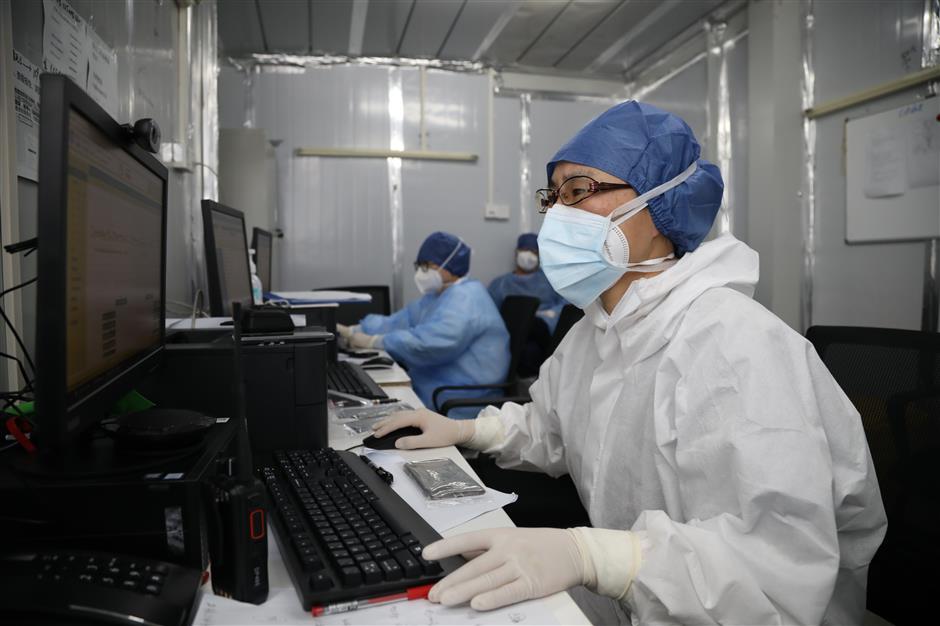 Medical workers from Shanghai managing data stored on computer as they prepare to tackle their next assignment. 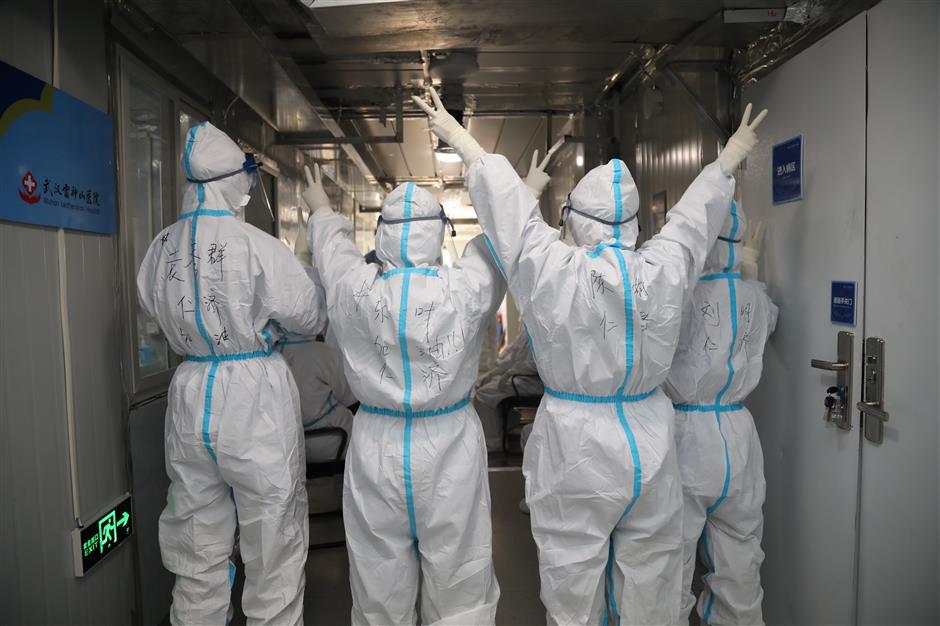 Medical workers responsible for a ward at Leishenshan Hospital celebrate its closure after the last patient was discharged. 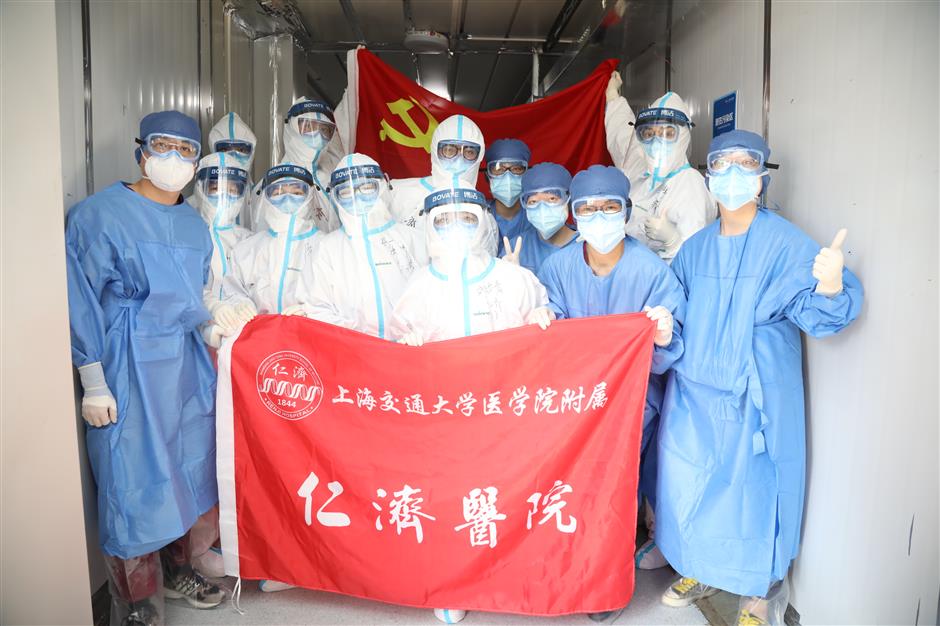 The medical team from Renji Hospital pose for a photograph to mark the closure of the ward at Leishenshan Hospital they were working in. 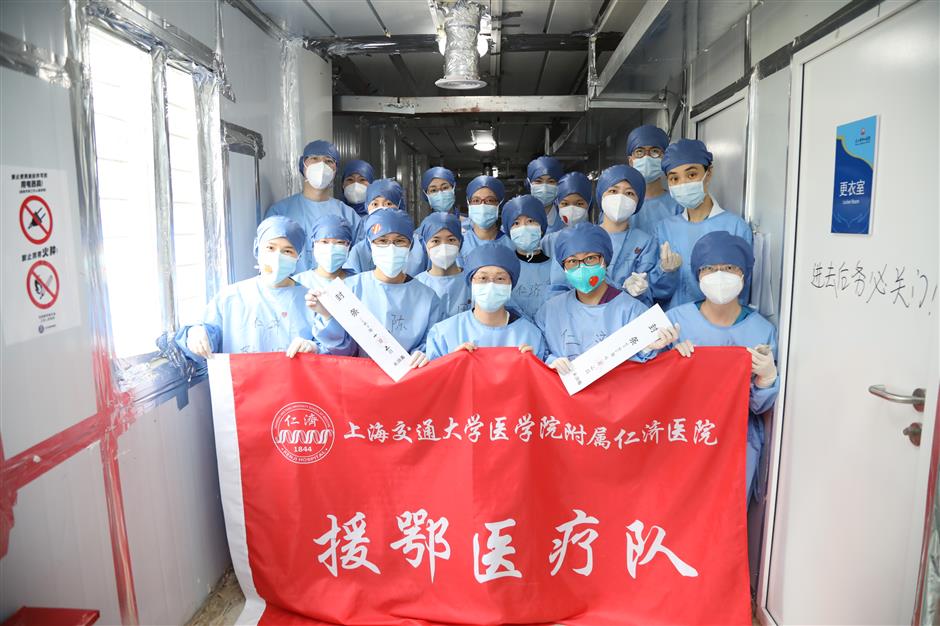 Medical workers from Renji Hospital celebrate the closure of their ward at Leishenshan Hospital in Wuhan. 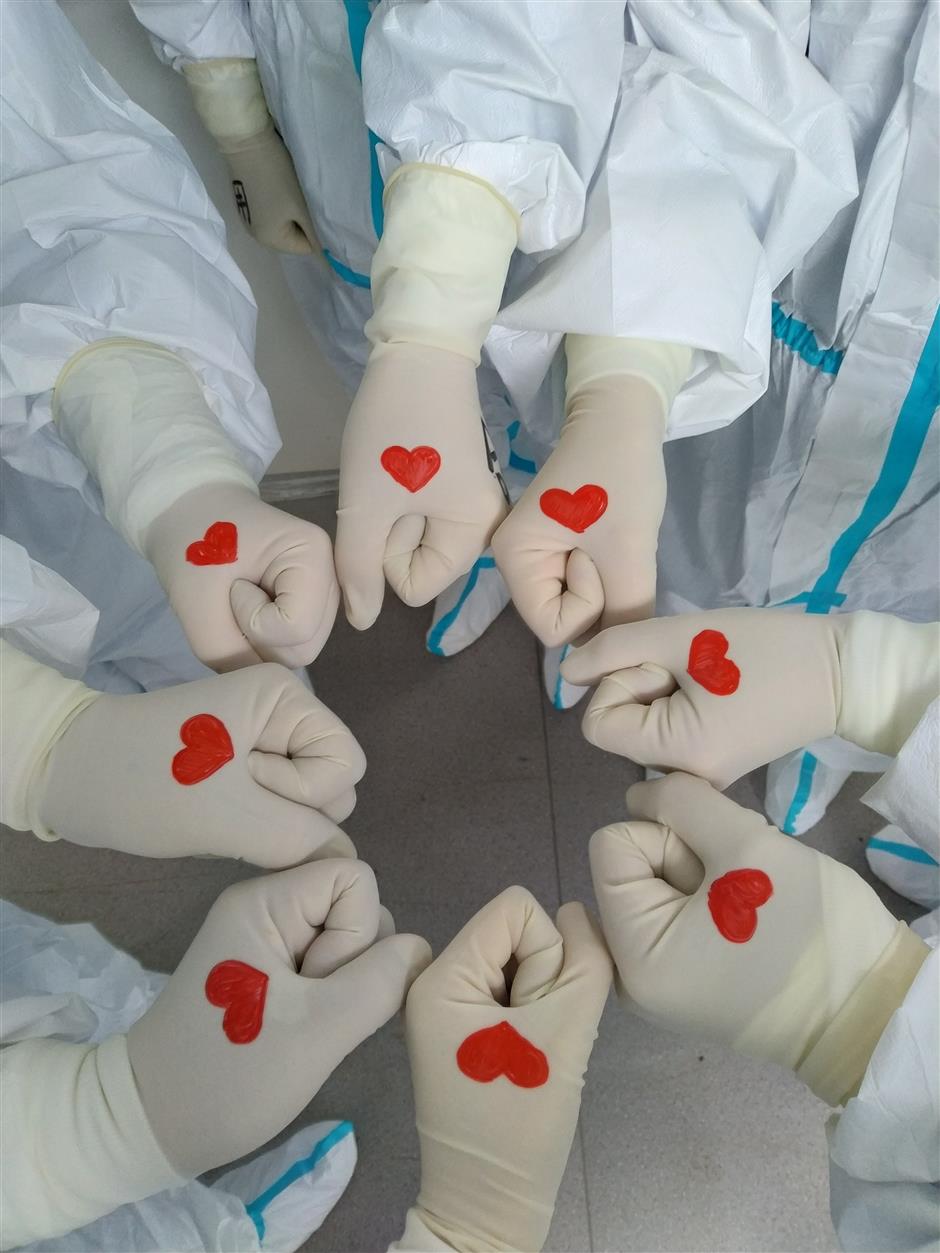 Hearts on the gloves of the medical staff from Shanghai Seventh People's Hospital. 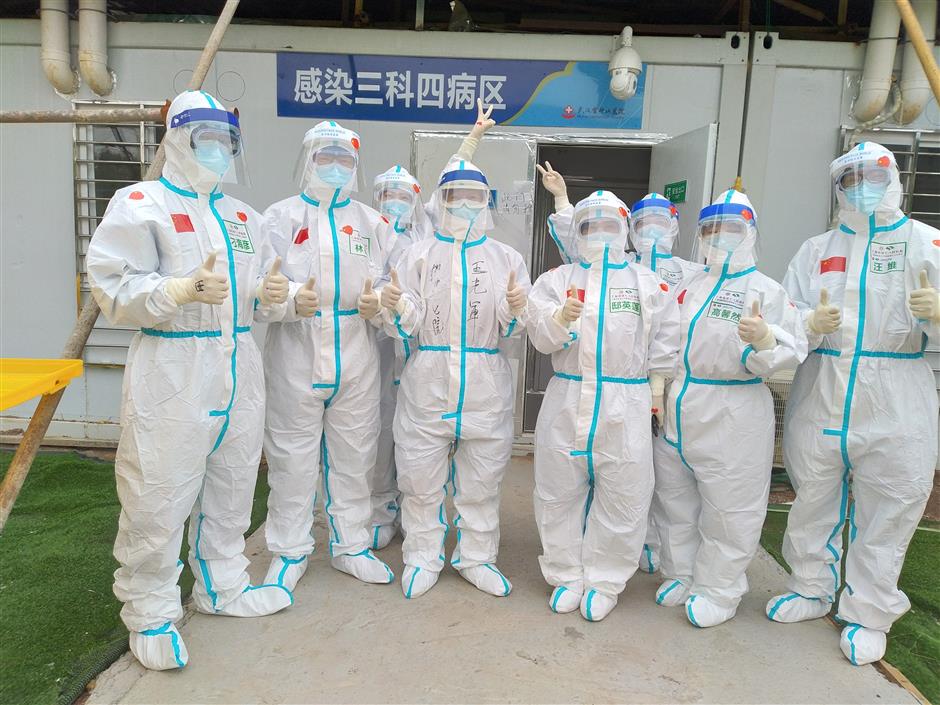