Shanghai helping friends around the world

Sister cities are sending messages of gratitude to Shanghai for its donation of medical supplies to support their fight against the coronavirus pandemic.

According to the Shanghai Foreign Affairs Office, sister cities and other regions had made donations to Shanghai when the virus fight was at a critical stage, and now the city wanted to offer its support as the pandemic spread around the world.

Though facing a shortage of medical supplies itself, Shanghai donated a batch of face masks to its sister cities and friendly regions in South Korea as the pandemic broke out there.

The mayor of Busan and the governors of Jeollabuk-do and Gyeongsangbuk-do wrote to Shanghai after they received the masks, expressing their thanks and their wish to enhance exchanges and cooperation with the city in virus control and prevention.

After South Korean media reported the donation from Shanghai, many South Koreans post messages of thanks.

“The donation is of profound meaning. Wish such love will continue!” one South Korean wrote online.

When Shanghai sent another batch of masks to Seoul, the country’s political and economic center, Mayor Park Won-soon sent a letter of thanks the day after they arrived.

“The sincere greetings from Shanghai people and your kindness have deeply touched Seoul people. They reflect the deep friendship between neighboring South Korea and China, between Seoul and Shanghai,” he wrote.

The Shanghai Foreign Affairs Office has also been helping South Korean residents and enterprises in Shanghai which were facing problems in getting back to work due to a lack of masks. The office contacted the Shanghai Charity Foundation and some masks that had previously donated to Shanghai by cities and regions in South Korea were distributed. 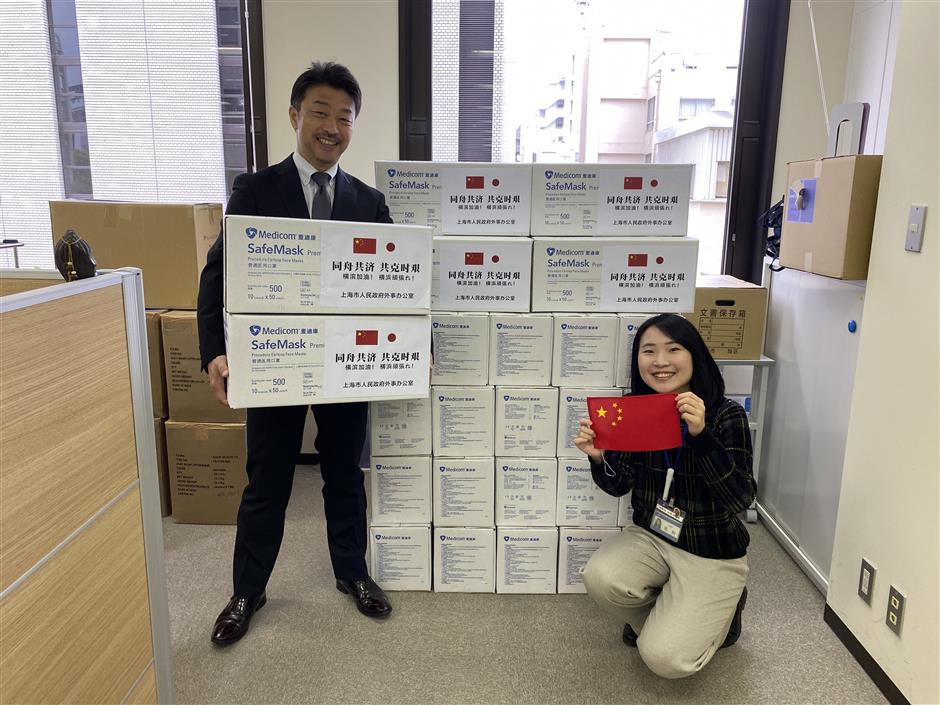 Japan also faces a shortage of medical supplies and the office said Shanghai had initially donated masks and sanitizing gel to Yokohama and Tokyo. The team responsible for the donation said they worked day and night with their counterparts in Japan to complete all the procedures for preparation, delivery and customs clearance, as sanitizing gel contains alcohol and is listed as a hazardous item. When supplies arrived at Narita International Airport in Tokyo, the Shanghai team could not help bursting into cheers.

The government of Yokohama, Shanghai’s first sister city, expressed its gratitude and its wish to conquer the virus in cooperation with Shanghai and to resume people-to-people exchanges between the two cities.

Shanghai donated another batch of masks to Osaka Prefecture and Osaka City, both its sister cities. With the experience of the previous donation, everything ran smoothly, winning a thumbs up from their Japanese counterparts. International affairs officials at Osaka Prefecture said they badly needed masks and those from Shanghai were good in quality and could be used by front-line staff.

“Help has come from all walks of life in China as the novel coronavirus broke out in Japan and Japan will always remember their kind deeds,” said Akio Isomata, consul-general of Japan in Shanghai, at a donations ceremony. “We hope to work hand in hand with China to overcome the hardship and defeat the virus soon.”

Shanghai has also donated supplies to eight cities and regions in Europe, including Milan and Lombardy of Italy, Hamburg in Germany and Marseilles in France.

On March 19, a batch of surgical masks from Shanghai arrived in Milan to support the city and Lombardy.

Michele Cecchi, consul-general of Italy in Shanghai, said Shanghai had not only provided medical supplies to Italy but also spiritual support for Italian people to defeat the pandemic with its experiences in combating the virus in China.

On March 27, several batches of medical supplies were ready to go to the French Auvergne-Rhone-Alpes region and Marseilles, also sisters of Shanghai, as well as greater Paris region which has a friendly relationship with Shanghai.

Benoit Guidee, the French consul-general in Shanghai, said at the donation ceremony that Shanghai had done a great deal in containing the virus and he thanked the Shanghai government and its foreign affairs office for both the donations and caring for expats including French people in Shanghai since the virus broke out.

Some of the supplies arrived in Paris on March 28 and some in Lyons on March 30.

Marseilles officials held up a poster with words “Thank you, Shanghai!” in French to welcome the donation. This year marks the 33th anniversary of the establishment of the sisterhood between Marseilles and Shanghai. 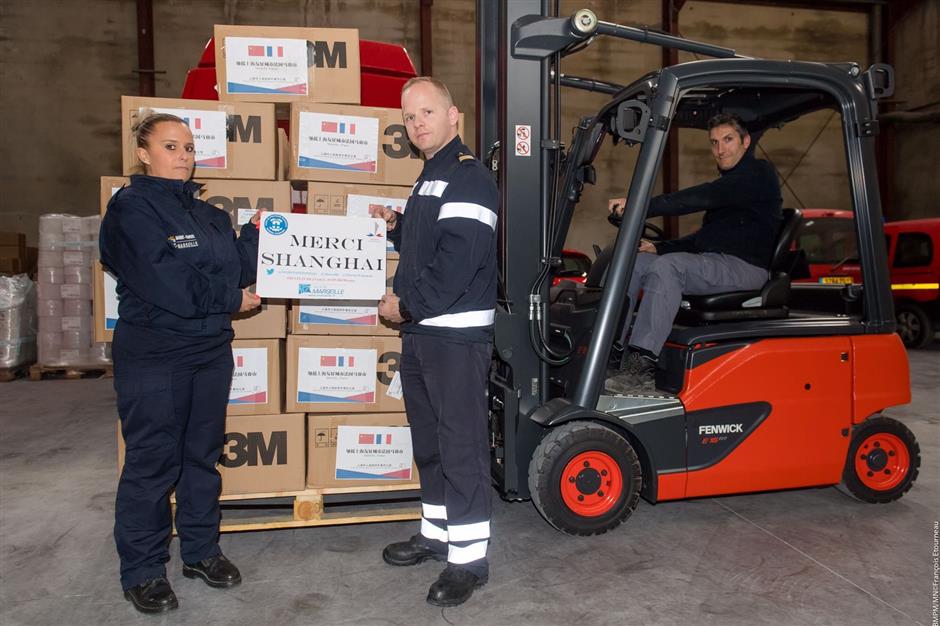 Marseilles officials hold up a poster with the words “Thank you, Shanghai!” in French to welcome the donation.

Meanwhile, a batch of supplies, including masks, protective suits and surgical gloves, is on its way to Panama to support the Latin American country’s fight against the pandemic.

Roberto Jou Law, consul-general of Panama in Shanghai, delivered a letter of thanks to the Shanghai Foreign Affairs Office at a donation ceremony.

He said the Panama government and its people were grateful for the support from Shanghai in its fight against the virus.

Two weeks ago, Shanghai’s medical experts shared their anti-virus experiences with Panama in a video conference.

Donations to Costa Rica, Guatemala and Ecuador are also on the way. 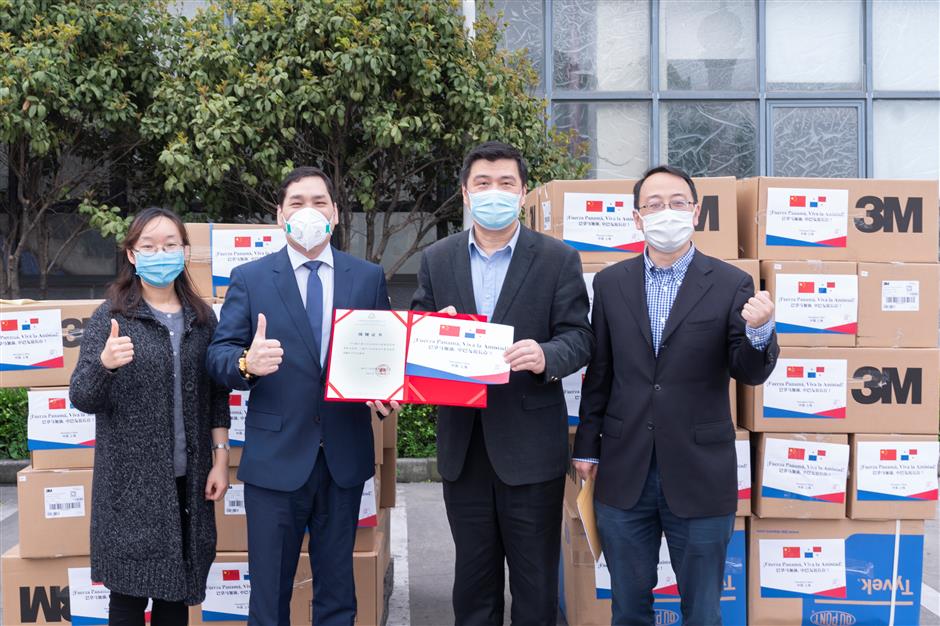 Thumbs up at a donations ceremony as supplies are made ready to be sent to Panama.