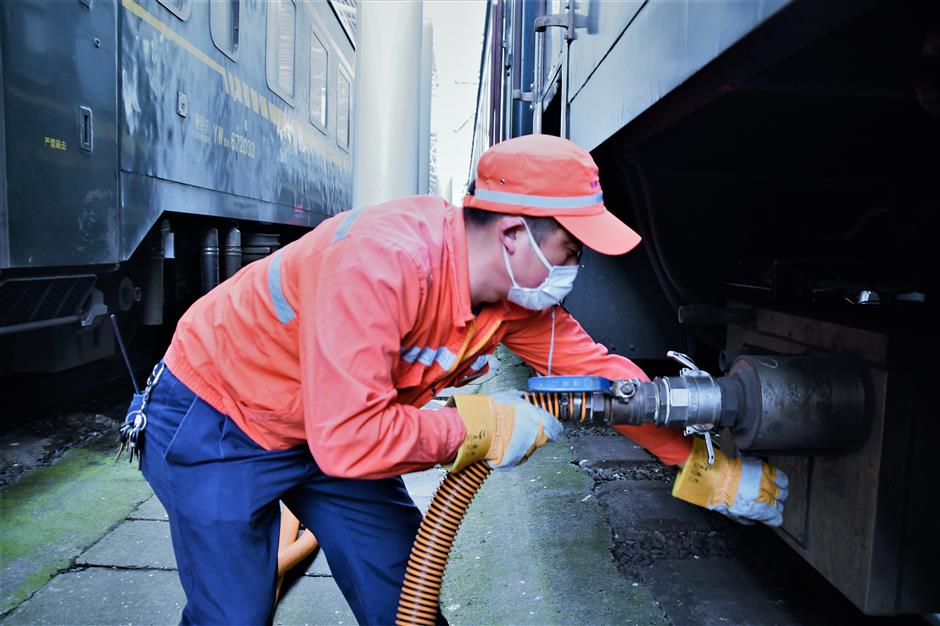 Han is one of about 70 workers who are responsible for removing fecal matter from passenger trains using special suction equipment. A native of Yancheng City, Jiangsu Province, Han usually removes excrement from about 30 trains per day, or as many as 40 per day during the Spring Festival travel rush, known as chunyun. His chunyun workload decreased during this year's holiday due to the novel coronavirus outbreak, although things are starting to pick up again with the resumption of more train services.

Han arrives at the station at 4:30am each day, patrolling and checking equipment, making repairs and doing maintenance. He doesn't leave until after 11pm when the last trains depart.

The job is not one that most people are even aware of, but Han's work is essential to ensure a sanitary environment for railway travelers.

Han took the job 11 year ago after the advertisement company he formerly worked for closed.

"The stench made me unable to eat and the work is tough, particularly in summer and winter," Han told Shanghai Daily.

In summer, the temperature on the tracks can hit 58 degrees Celsius as its highest due to the high ground temperature and heat radiating from the trains.

The tough working conditions would scare many away, but not Han and his fellow workers.

"The hot steaming air from the trains, mixed with the stink, makes me uncomfortable and I struggle to breathe while soaked in sweat," Han told Shanghai Daily. "But I have to stick it out because it is my duty that makes sure passengers can use the toilets."

Winter is also a severe challenge because fecal draining valves are frozen sometimes. Even in extreme weather, the work does not stop.

"In typhoon and downpour conditions, raincoats don't help because they are either blown away or soaked by rain," Han said. 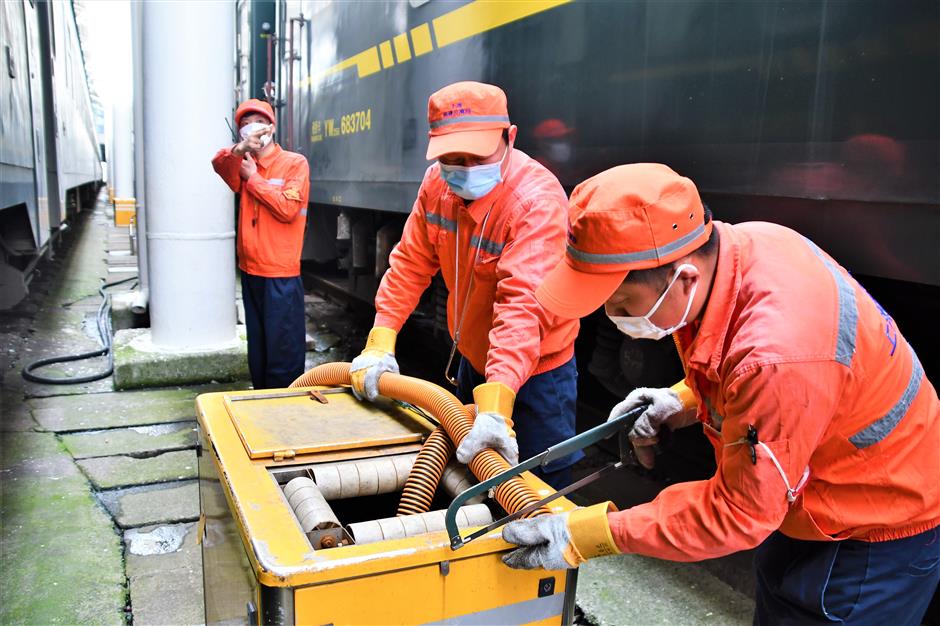 Amid such hardships, what keeps Han on the job? He says he appreciates the stability, although he did consider quitting at the beginning.

"I did not tell my classmates and friends what I am doing because the job is related to waste," he told Shanghai Daily. "Many of my colleagues quit soon after they started the job."

Over the past 11 years, Han has not returned to his hometown once during the holidays, not to mention the Spring Festival, a time traditionally reserved for family reunions.

"The Spring Festival travel rush is our busiest time," he said. "Moreover, the Shanghai Railway Station is a big station with lots of traffic."

A train usually has 18 carriages and 34 fecal matter collection tanks. Pumping waste might seem like a simple job, but it's a complicated, multi-step process. Every step requires skill and practice.

"Each motion needs to be done very strictly based on procedure because any failure might lead to leakage of excrement," said Han. "Polluted clothing is not worth mentioning, but leakage may affect the normal departure of trains."

The work is dull and hard, but Han does not complain.

"I've become used to the work and a clean toilet environment for passengers is my pursuit," he said.

Concentration is also important in the job because any small oversight might lead to an accident, said Han.

Together, they move about 50 tons of waste from around 2,000 feculence tanks every day.

Since the coronavirus epidemic, they've had to have their temperatures checked and wear protective gear while on the job. They've also needed to increase the frequency of disinfection at working spaces.

The crew must be more careful to prevent being sprayed by waste because of the potential risk of fecal-oral virus transmission.

If workers use their hands to clear blocked pipes, they must then undergo thorough disinfection and cleaning.

Train services from Wuhan, the former epicenter of the coronavirus outbreak in China, resumed on April 8. Seventeen trains left Wuhan for Shanghai that day.

"If I said I was not frightened of the potential hazards of being infected, it would be a lie, but I am confident in our nation's prevention measures," said Han.

Dong Wei, head of the team, started as a waste removal worker in 2007.

"At first, we used fecal-removing vehicles, which were gradually replaced by vacuum suction systems," he said.

"The job requires a strong sense of responsibility and workers usually have no rest during their work," he said.

The halt duration of each train varies, making the work sometimes a race against time.

"It can be one hour, or just 12 minutes and we need to deduct four minutes around a train's departure and stop to ensure work safety, requiring us to highly concentrate on the work and be as efficient as possible," Han told Shanghai Daily.

"Sometimes careless passengers flush items like towels, belt buckles, plastic bottles or combs down the toilet, which will abrade the belts of our pumping system or block the pipes," he said. "We need to remove the excrement by hand in such cases."

The oldest worker among the 70 workers is 58 years old, although most are in their 40s, according to Dong.