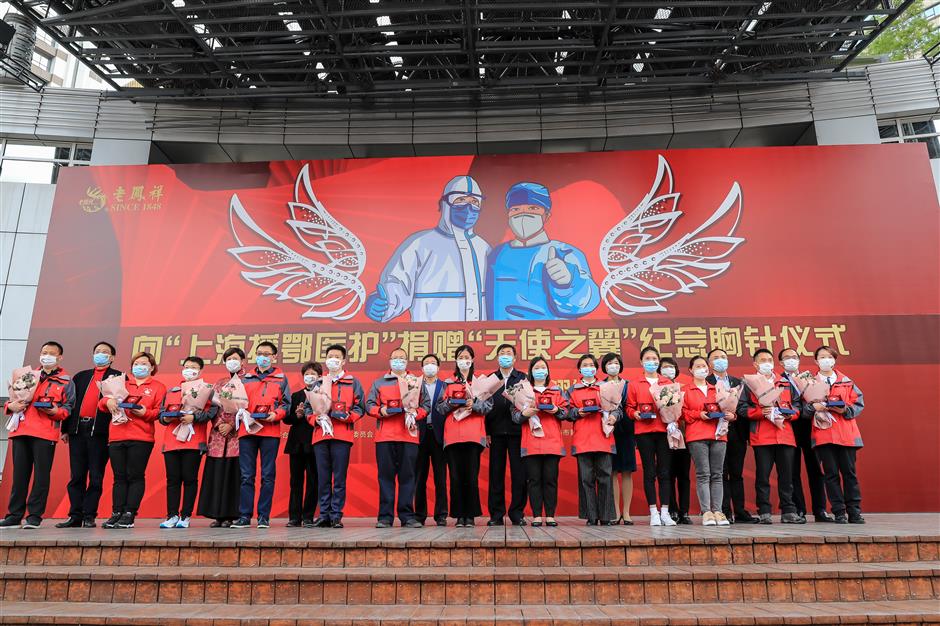 Huangpu District presented a platinum and diamond brooch to each of the 1,649 Shanghai medical team members who fought COVID-19 in Wuhan, once the hardest hit city in China.

The memorial brooch named the “Wing of the Angel” was designed and manufactured by Shanghai’s Lao Feng Xiang. It is platinum mounted with 12 diamonds.

The No.0000 prototype has been donated to the Shanghai History Museum to commemorate how the city fought the coronavirus outbreak. The others will be presented to each of the Shanghai medical team members through the Shanghai Children's Federation.

"The Shanghai medical team members have not only helped prevent the spread of the pandemic in China, but also inspired many others to jointly fight against COVID-19," said Huangpu Party Secretary Gao Yun.

A presentation ceremony was held at Century Square on the Nanjing Road Pedestrian Mall on Thursday. Thirteen members on behalf of the local medical team received the memorial brooches. City and district officials then presented others to members of the medical team at Huashan, Ruijin, Renji and Shuguang hospitals. The design of the brooch involves the petal of the magnolia, Shanghai's city flower, and the wings of the angel, representing the medics.

Shanghai sent a total of 1,649 medics in eight teams to the central Chinese city of Wuhan since two days before Spring Festival. All have now returned home with none having been infected.

"The brooch will not only become a memory to my days in Wuhan, but also an inspiration to encourage me to keep fighting against disease and better serve patients," said Chen Junyan, a nurse at Shanghai Ruijin Rehabilitation Hospital.

As the deputy team leader, she led the first Shanghai medical nursery team to go to Wuhan on January 27, Chinese New Year’s Eve, and served patients at the Jinyintan Hospital, a designated coronavirus hospital in the Hubei Province capital.

She designed lung rehabilitation exercise to improve the recovery of many patients in intensive care.

The design of the brooch include the petal of the magnolia, Shanghai's city flower, and the wings of an angel, representing the medics, said Huang Wen, deputy director with the Lao Feng Xiang Design Center.

"We selected the final design from over 100 candidates, which included those in the shape of a mask or glove," said Huang. "Through the final design, we'd like to highlight the beauty of the medics," she said.

Wang Naiyi, designer of the brooch, said it took just three days to complete the design. "I was touched by the medical team members and tried to involve their spirit into the design," Wang said. The brooch is suitable for both women and men to wear. 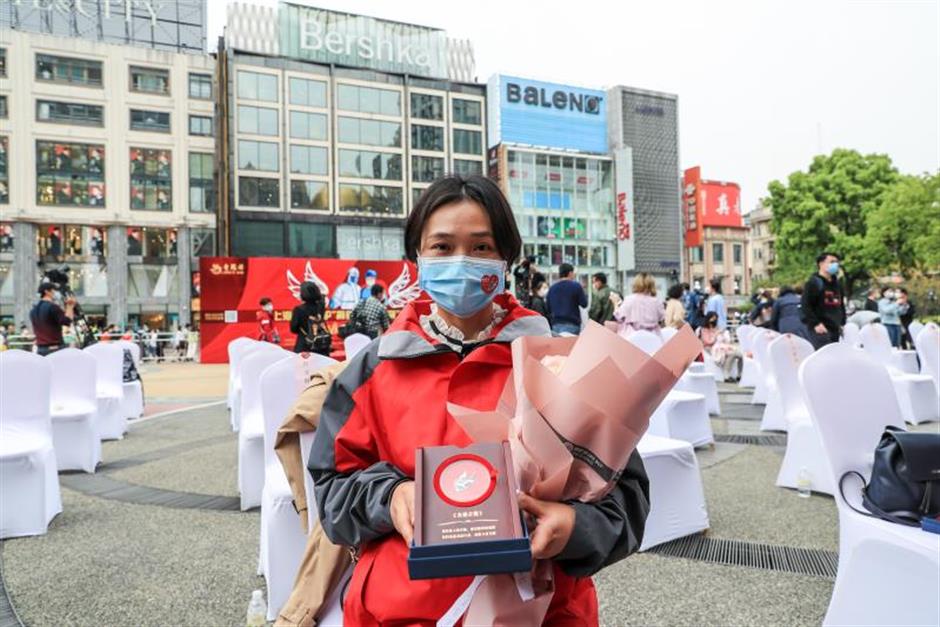 A Shanghai medical team member displays the “Wing of the Angel” memorial brooch.