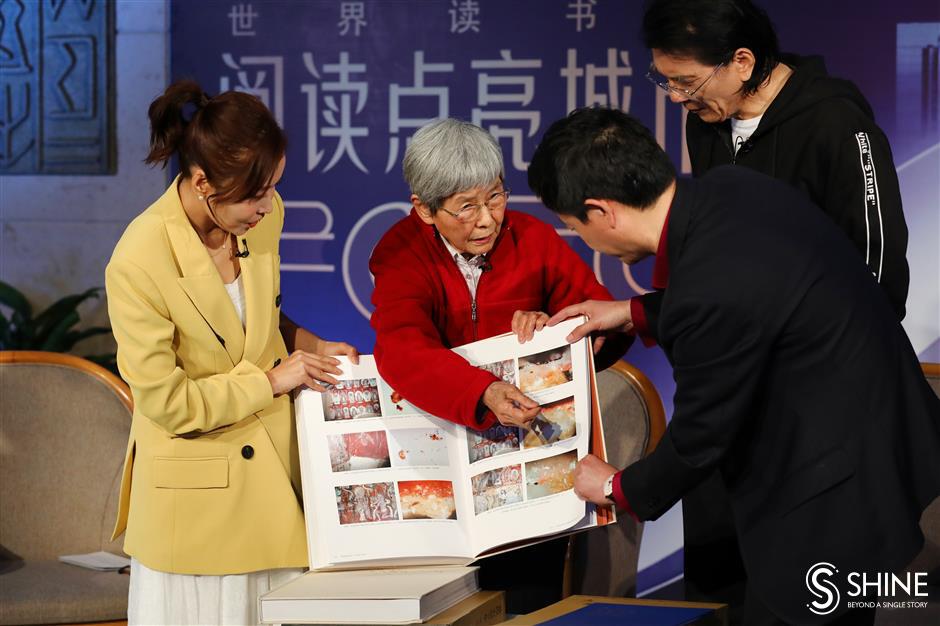 Fan Jinshi, honorary president of Dunhuang Academy, donates a set of books on archeological reports of Dunhuang Mogao Grottoes completed by the academy to Shanghai Library.

Shanghai Library presented an online tour to Bibliotheca Zi-Ka-Wei, a branch adjacent to St Ignatius Cathedral in Xujiahui, Xuhui District, and home to more than 50,000 old books in Western languages and 560,000 books and other printed material published before 1950.

It was part of the library's online "Lightening the City with Reading" event on Thursday night to celebrate World Book Day, with various activities related to reading including library and exhibition tours, themed talks, the library's rare editions collection, book recommendations and rubbing making.

Guided by Xu Jinhua, an official with the library's historical documentation center, the tour began with an aerial photo of old Xujiahui taken in 1930 that is hanging on the wall of Bibliotheca Zi-Ka-Wei's lobby.

Built in 1847 by Jesuits, the 173-year-old Bibliotheca Zi-Ka-Wei used to be the St Ignatius Catholic Library. By 1897, the library had outgrown its space and a new two-story, 12-room library was planned.

Although registered Shanghai Library readers can use the Bibliotheca Zi-Ka-Wei reading room, the two-story library is not open to them. The online tour gave readers a chance to visit.

The library keeps a large number of old books in Western languages and Xu showed online viewers several that were closely related to the city.

One was the huge, thick Webster Collegiate Dictionary published by The Commercial Press, a local publishing house set up in 1897 and the oldest in China.

In contrast was a tiny three-volume set of German writer Johann Wolfgang von Goethe’s Faust. The books measure just 5.1 centimeters high but are bound in leather and contain beautiful illustrations.

Magazines and newspapers played an important role in people's lives before the advent of the Internet.

Targeting women as its readers, Social Shanghai, a lifestyle magazine dating back to 1906, provided everything foreigners in Shanghai wanted to know about topics such as fashion, tourism and shopping.

Men had Sports Gossip, published from 1897 and said to be China's first sports newspaper. It covered matches and events from horse racing to soccer.

The Shanghai Almanac recorded the life of foreign immigrants in Shanghai and their views about China. Xu showed some pages of foreigners' feelings about traditional Chinese marriage. Besides the text, there was a woodcut illustration of baitang – part of the ceremony where the bride and groom bow to express their worship of heaven and earth.

At the end of the tour, Xu held a quiz about the year the book "China in the 16th Century: The Journals of Matthew Ricci" was published. The book is a compilation of letters and diary entries of Italian Jesuit priest Matthew Ricci, one of the founding figures of the Jesuit China missions. It was compiled by his peers after his death and has been translated into five languages with 10 editions.

The live show also featured an exhibition of manuscripts of letters and messages related to the fight against coronavirus and items from individuals and organizations battling the disease. The exhibition, which opened on Thursday, is on the library's innovation space on its third floor and its new branch in the Pudong New Area, the construction of which is planned to be completed by the end of next year.

Library researchers recommended a few rare editions of ancient Chinese books stored at the library, mainly about Chinese history and information on foreign countries. An expert on the preservation and restoration of literature showed the steps of making rubbings at the site. 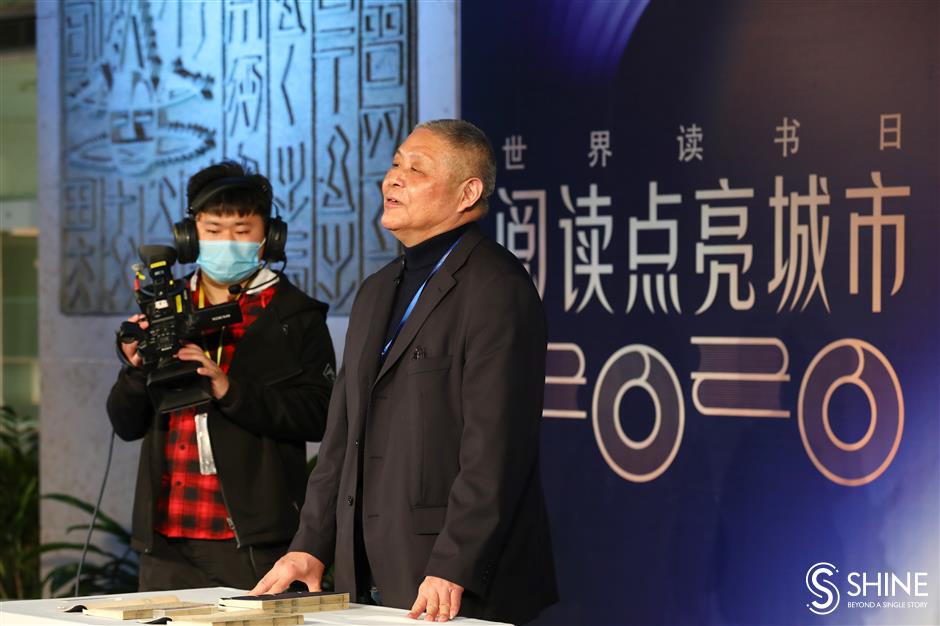 Chen Xianxing, a member of the National Commission for Cultural Relics Identification and researcher of Shanghai Research Institute of Culture and History, introduces some rare editions of ancient Chinese books. 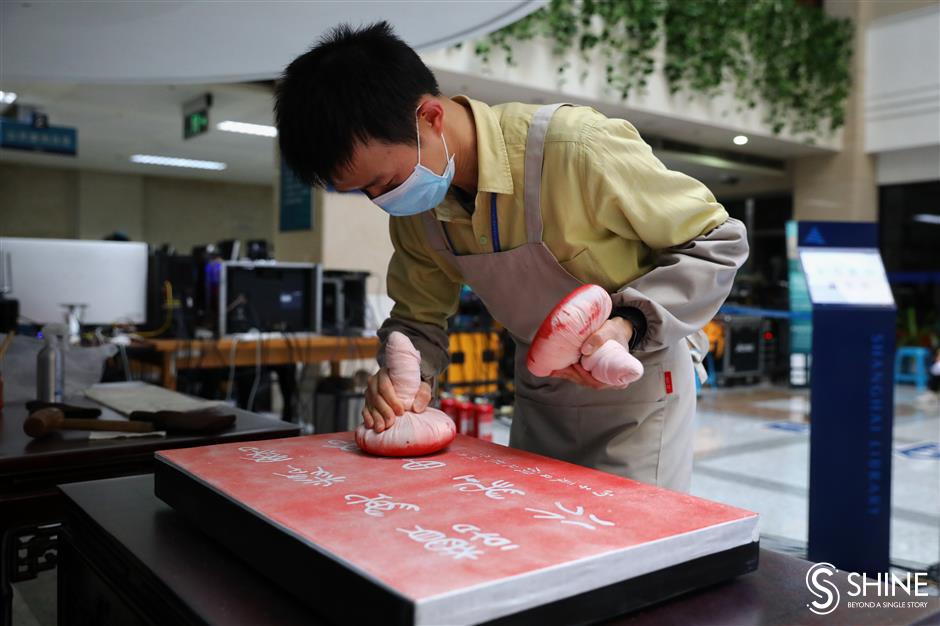 Wang Chenmin, an expert at Shanghai Library on the preservation and restoration of literature, shows the steps of making rubbings. 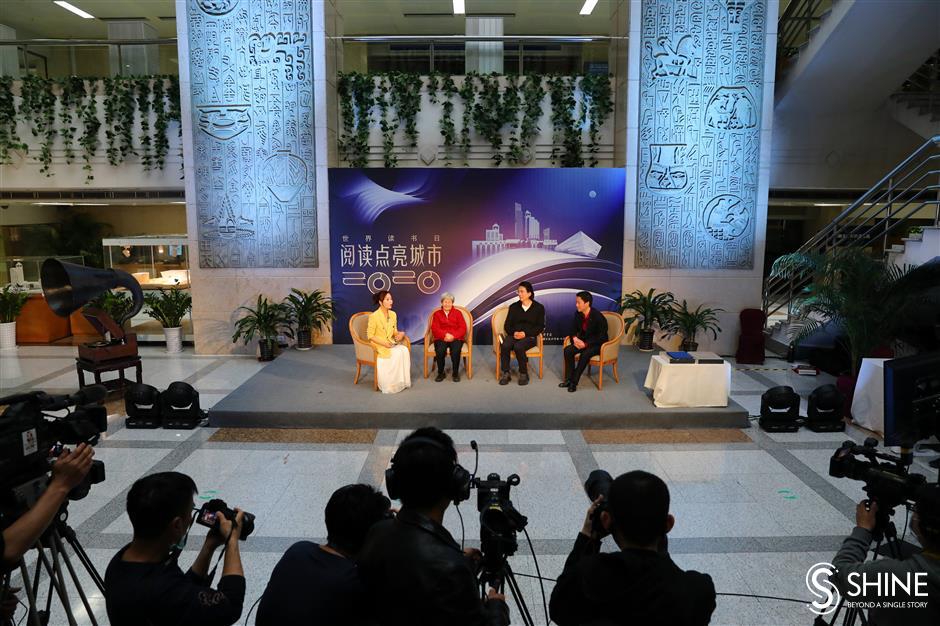