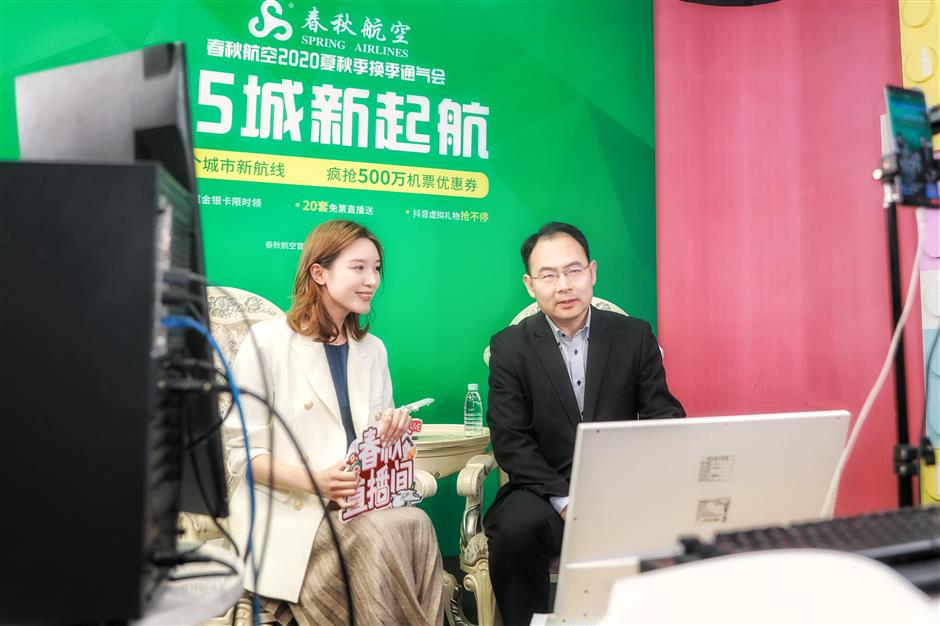 Zhang Wu'an (right), a spokesman for Spring Airlines, introduces the new routes the budget carrier plans to open in May during a live webcast.

Spring Airlines will open 47 domestic routes from Sunday to meet the increasing travel demand as the COVID-19 pandemic wanes in China.

The Shanghai-based budget carrier announced during a livestreamed press conference that some of the routes will cover Yangtze River Delta cities.

The new destinations include Yancheng, Lianyungang and Huai'an in neighboring Jiangsu Province as well as Linyi in east Shandong Province and Zhangjiajie in central Hunan Province.

Travel demand from these cities is rising as employees are flying back to their workplaces, said Zhang Wu'an, a spokesman for the carrier. The airline has already operated 10 charter flights for 20 companies to take some 1,500 employees back to work in the Yangtze River Delta region as well as Shenzhen in southern Guangdong Province.

The recent dramatic reduction in fuel oil prices has also cut the cost for airlines to open short-distance routes, Zhang said. The domestic jet fuel price will drop to 1,680 yuan (US$237) per ton, down from 3,029 yuan, starting in May, according to the National Development and Reform Commission.

Zhang said these short flight routes are expected to help employees return to their workplaces more conveniently, while reducing the risks of cross-infection.

The flight from Huai'an to Shanghai, for instance, will take about an hour, compared with five hours by bus or high-speed railway.

Flight tickets have also become cheaper for May. A ticket between Shanghai and a Yangtze River Delta city will cost about 200 yuan, compared with over 300 yuan for a train ticket.

The airline has also launched a new service at the Hongqiao and Pudong airports which allows passengers to pay an additional 100 yuan for the neighboring seat to avoid sitting next to other passengers.