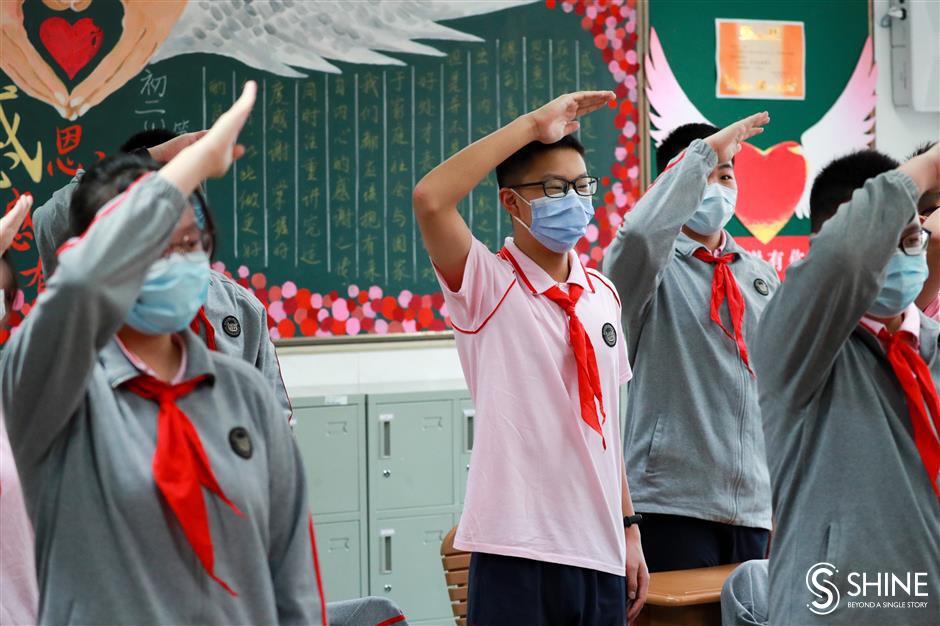 Eighth graders at No. 2 Secondary School Affiliated to Tongji University during the national flag raising ceremony in their classroom on Wednesday

About 152,000 eighth and 11th graders returned to school on Wednesday, after an extended winter vacation and two months of home study due to the pandemic.

They are the second batch of students to return. Ninth and 12th graders were back in class last week while fourth, fifth, sixth, seventh and 10th graders will return on May 18.

At No. 2 Secondary School Affiliated to Tongji University, 71 ninth graders arrived at 7am with 88 eighth graders entering 15 minutes later.

“We arranged for them to come at different times to avoid massive gatherings and prevent cross-infection,” said Che Wenbo, vice principal of the junior high division. “As we’d informed parents and students about the procedures during an online orientation and shared them a video of a drill with students played by young teachers, so they returned to the classrooms quickly today.”

Students walked through a tent equipped with an infrared thermometer to check their temperatures and washed their hands before heading to their classrooms.

“There used to be three taps near the gate when the first students returned and we added another two when the second came back,” said Che. “We’ve accumulated experiences from last week with the ninth graders and made some improvements accordingly.”

Outside their classrooms, students put their homework on desks and waiting in line to have their temperatures checked again by their teachers.

“I’m excited to be back in the classroom and see my classmates and teachers again,” said Sun Jiaqi, an eighth grader. “The school is familiar but also a little unfamiliar to me, with more teachers stationed at the gate to instruct us and more devices installed to check our temperatures and wash our hands.

“Taking online classes at home is less intense and efficient than attending classes in the classroom,” he said. “We hope to come back to better prepare for the united exam for history at the end of June. The score will be counted in the high school application and it’s the first time for us to take such a test, so we are nervous.”

Sun’s classmate Huang Simin said: “I found the learning efficiency at home was unsatisfactory, and sometimes I finished my homework at midnight,” she said. “So I feel surefooted when back today and will study hard to make preparation for the exam.”

Sun said his parents had helped him check necessary items, including four masks, a small bottle of hand sanitizer and a placemat, before he left home.

Zhu Huanfeng, the mother of a student in the class, said parents were both excited and a little worried as their children returned to school.

“We are worried as the pandemic is not over yet,” she said. “But it’s good for their health and study to be back to the school. I think the school has made good preparations and seeing the protective measures on campus today makes me feel more assured.” 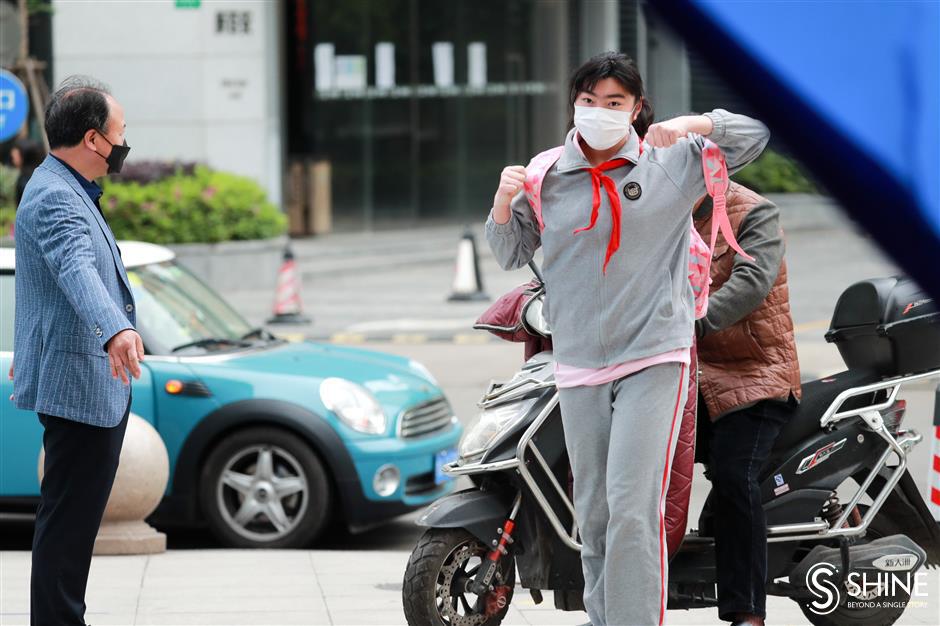 A student arrives at the junior high division of No. 2 Secondary School Affiliated to Tongji University on Wednesday.

Lunch was served in classrooms, instead of in the canteen as before. There is an extra classroom for each class where teachers can tutor some students who need help separately and for half of the students to have lunch so as to keep at safe distances.

“The ninth graders know well they are going to take the high school entrance exam soon and have been preparing for that important occasion,” Che said. “But the younger graders are more relaxed, so we will get them prepared. Meanwhile, they are also livelier, so we might also need to spend more time reminding them to keep at an appropriate distance and wear masks during class breaks.”

Che said the school had made plans for the return of sixth and seventh graders on May 18.

“There will be a total of 1,008 students on campus then,” she said. “These include eight classes for Grade 6. We will move four classes to the laboratory building to make space for them.” 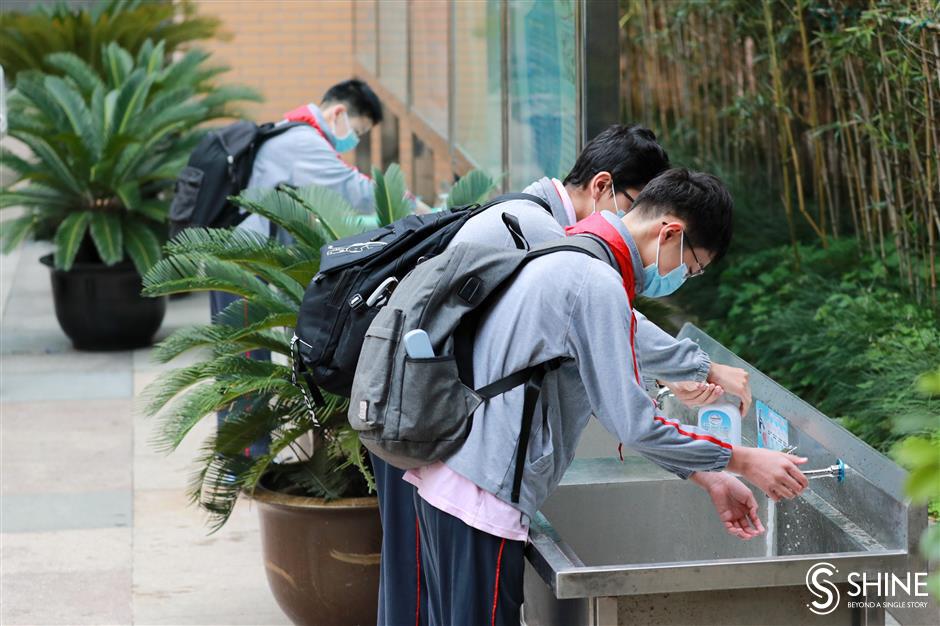 Students wash their hands after entering the school gate.

At the senior high division of the school, similar measures are in place for the health and safety of students and faculty.

“With the experience from the past week with 12th graders, the return of 11th graders went smoothly today,” said vice principal Jiang Fengpei.

Only one of the four classes of Grade 12 has more than 30 students, so students of that class have lunch at the canteen, where they have to follow marks on the ground to pick up meals and sit facing in one direction when eating with one student at each table. Other students remain in their classrooms and lunch is delivered to them.

“All Grade 11 classes have more than 30 students, so we separate each of them into two classrooms for lunch,” said Jiang.

“The student was found with a temperature of 37.3 degrees Celsius after lunch and it did not fall after several checks, so we called his parents, who took him to hospital,” he said. “Although the hospital said he only had a cold, the whole class was moved to a backup classroom farther away from the other three classes and not moved back until a test ruled out the possibility of him having a coronavirus infection." 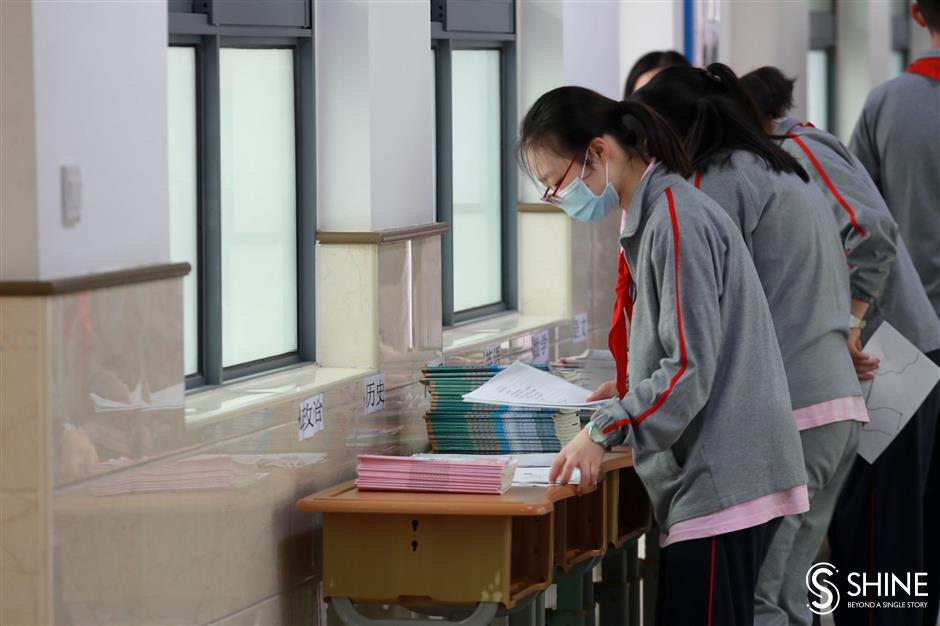 Students put their homework on desks outside their classroom.

Teachers don’t leave classrooms after class until colleagues teaching the next lesson arrive to make sure students can always get help if they need it. Some teachers volunteer to maintain order in corridors during breaks.

During short breaks, only five students from a class can leave the classroom at a time to reduce gatherings in corridors.

“There is a 35-minute break in the morning and afternoon, when students can do indoor physical exercises and take turns to go to the playground or the big platforms in our building for a walk or a rest,” he said.

Jiang, who teaches Grade 12 physics, said students had adapted to campus learning during the first week.

“They face higher pressure offline than online, especially under pandemic prevention measures,” he said. “So we spent the first week on easing their anxieties and assessing the results of online education. We’ve finished assessment with the 12th graders’ performance in the past week and will solve problems found later. Thanks to the one-month delay for the university entrance exam, it gives us enough time to get students prepared and relieve their anxiety.”

Gu Zhenhao, a 12th grader, said that though the protective measures in the school were restrictive, they made him feel safe.

“I like the face-to-face teaching at class,” he said. “Now the teachers would come to the classrooms to answer our questions every day, which also makes me feel more assured.”

Jiang said that with the experience of the past week and the next two, he was confident about welcoming back 10th graders on May 18.