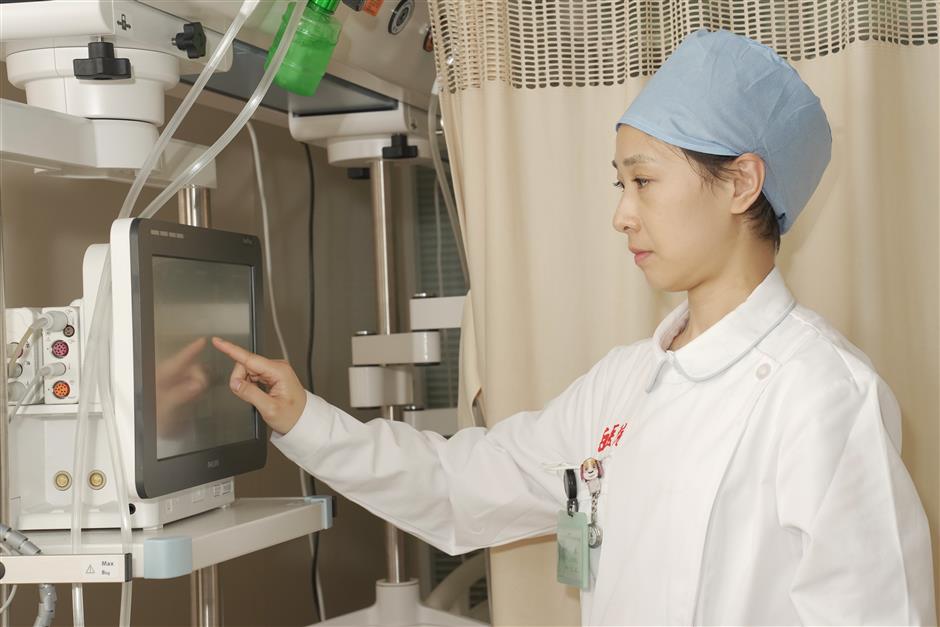 Zhang Yan is adjusting the electrocardiograph monitor for a patient.

Zhang Yan, 39, charge nurse at Yueyang Hospital of Integrated Traditional Chinese and Western Medicine's cardiothoracic surgery department, has won the Shanghai Good Nurse Award along with 19 of her local peers.

Including Zhang, seven of the winners had volunteered to work in coronavirus-hit Wuhan City during the battle against the epidemic. Zhang was working at Leishenshan Hospital, a makeshift hospital for treating patients with COVID-19.

Zhang, who has been serving at Yueyang Hospital's intensive care unit for 17 years, filed an application to head to Wuhan soon after the epidemic broke out around the Chinese New Year. She became a member of the nation's fourth group of traditional Chinese medicine practitioners and set off on February 15.

When they arrived at the C7 ward of the newly built hospital, it was almost empty. Zhang then led more than 20 nurses from Yueyang Hospital to furnish the ward with beds, chairs, medical equipment and computers as well as setting working plans and schedules with the other medics.

The ward opened on February 19 and received 48 coronavirus patients in four hours. 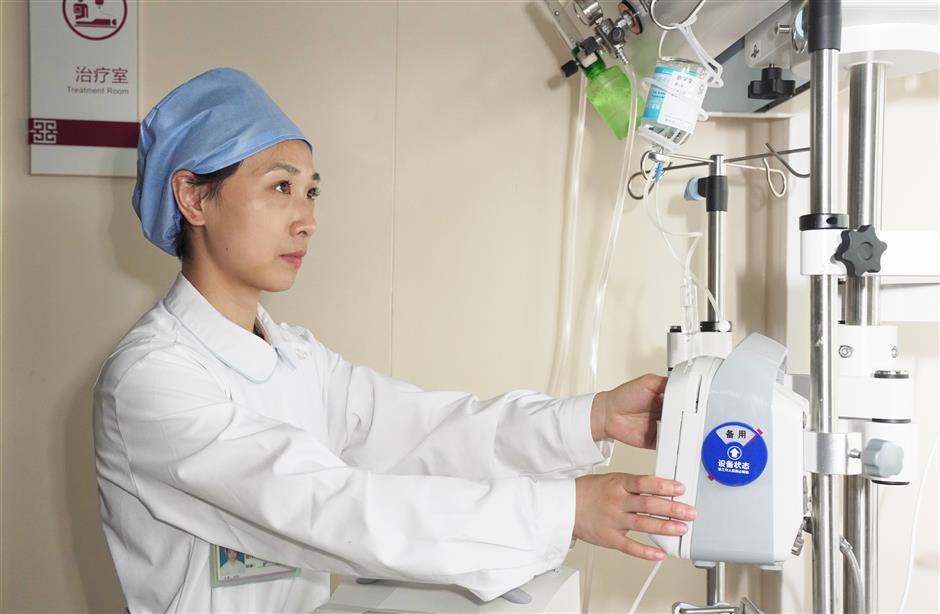 Zhang Yan adjusts the infusion pump for a patient.

One of her patients was an 81-year-old woman named Wu, a critical patient whose blood-oxygen saturation was only 69 percent when she was brought to the hospital.

The results of a CT scan showed that her lungs had diffuse lesions. She also suffered other diseases like diabetes, high blood pressure, renal insufficiency, hypoproteinemia and hypokalemia, which made her condition more serious.

She groaned with pain and was unable to speak a whole sentence. Risks such as respiratory failure and multiple organ failure could have happened to her anytime.

The medical team worked out a therapy combining Western medicine and traditional Chinese medicine for Wu with careful nursing by Zhang and the other nurses.

With their efforts, Wu gradually recovered and later her blood-oxygen saturation returned to a normal level of 95 percent without using a breathing machine. 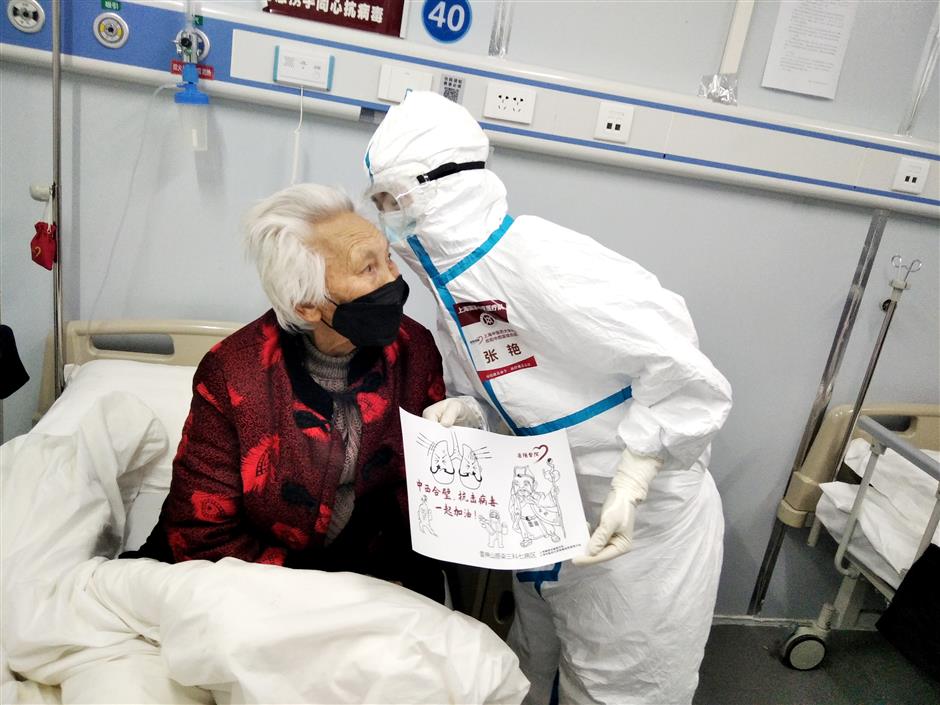 Zhang Yan is talking to her patient, 81-year-old Grandma Wu, at Leishenshan Hospital in Wuhan.

Another patient who impressed Zhang is a mother who gave birth to a baby just eight days before she was transferred to Zhang's ward.

"She had to be separated from her baby. Considering her mood, we kept communicating with her and paid more attention to her mental health. We tried to follow the changes in her mind in case she would suffer some psychological problems like postpartum depression," Zhang told Shanghai Daily. "But she was so strong that she braved the challenge. She had a positive attitude toward the treatment and appreciated that her premature baby was not infected."

"We were deeply touched by her bravery and optimism. Learning that we were from Shanghai and needed to be away from our families and children, she said she could understand our feeling." 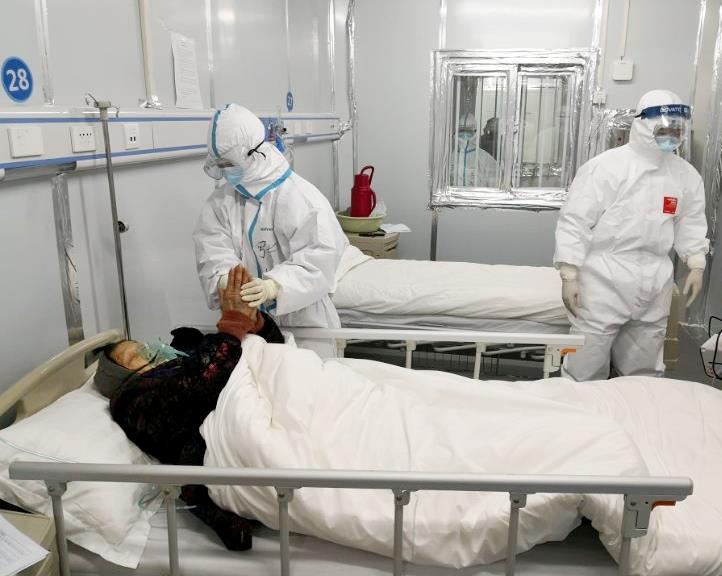 Zhang Yan (left) and another medical worker are taking care of a patient at Leishenshan Hospital in Wuhan City.

Yueyang Hospital is known for incorporating Western medicine with traditional Chinese medicine. And Zhang has applied this specialty in her nursing.

Besides acupuncture, she also used other traditional Chinese treatments such as moxibustion, acupoint plaster application and fumigation of herbs.

"There was a pair of mother and son in our ward. The mother had some problems with her leg when being hospitalized and had to be wheelchair-bound. But after receiving our TCM treatment, including acupuncture and herbs, she was able to walk without the wheelchair when she was discharged," said Zhang.

"She spoke highly of our medical team as well as traditional Chinese medicine and said she would fly to Shanghai to see us in the future."

In Zhang's words, using life to protect life is the nurses' mission and she hopes their contributions can ensure the patients' recovery. 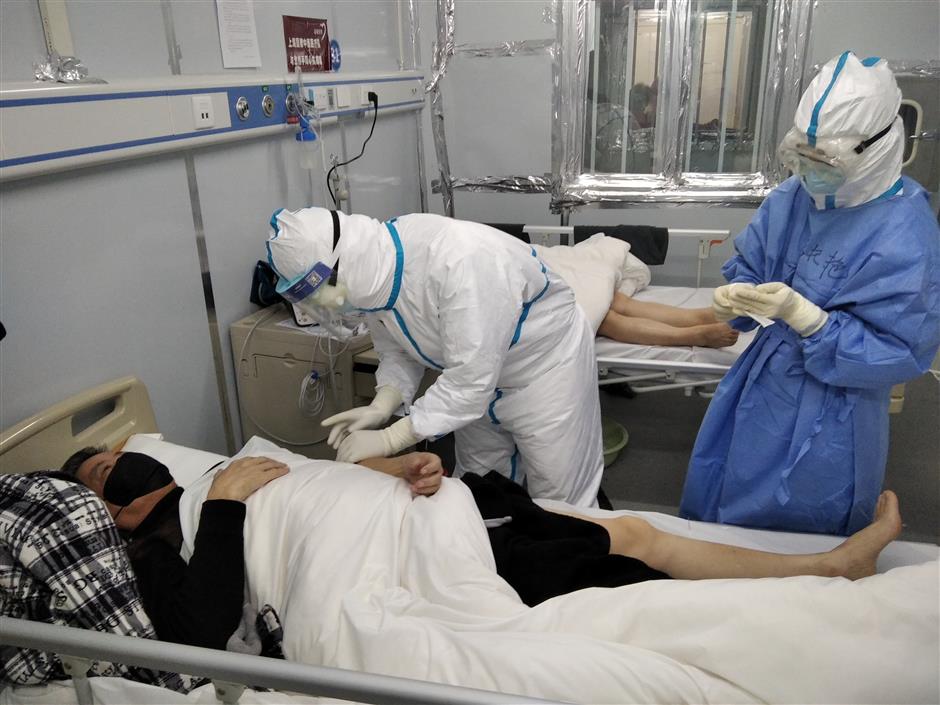 Zhang Yan (left) and another medical worker are taking care of a patient at Leishenshan Hospital in Wuhan\.