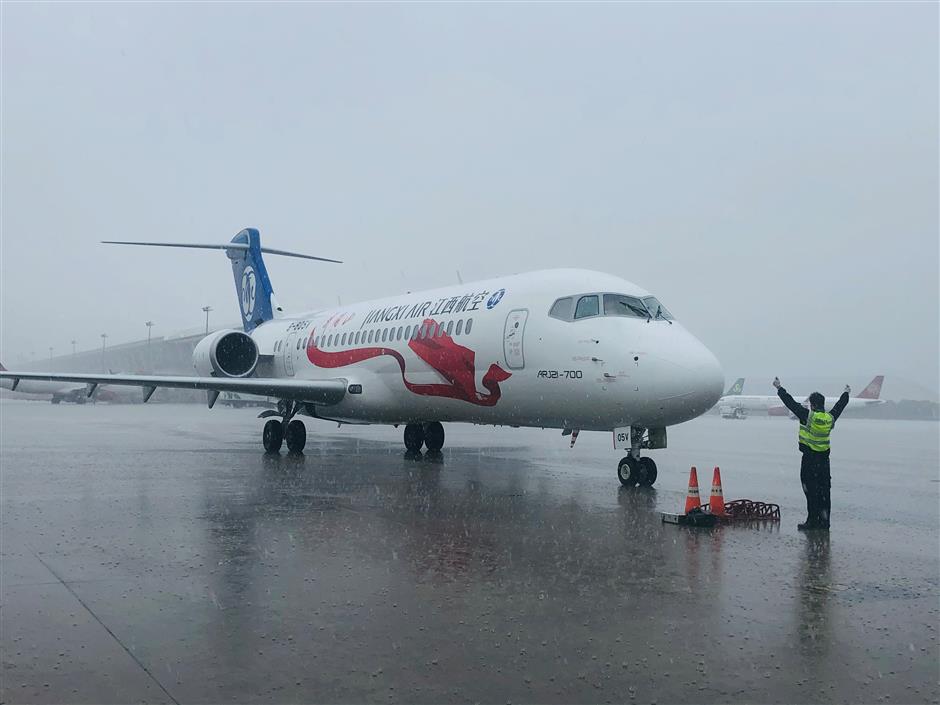 The Jiangxi Air's ARJ21, No. Jinggangshan, is guided to a halt.

The domestically developed regional jet, the ARJ21, landed at the Shanghai Pudong International Airport for the first time on Saturday.

The Jiangxi Air ARJ21 service will fly between Shanghai and Nanchang in east China's Jiangxi Province every Tuesday, Thursday and Saturday.

Pudong airport made full preparations for the arrival of the ARJ21, the Shanghai Airport Authority said. The airport  allocated specialized aprons, towable stairways and shuttle buses for the aircraft and its passengers. A refueling team was also dispatched to serve the regional jet.

Jiangxi Air took delivery of its first ARJ21 on January 19 at Nanchang Yaohu Airport from manufacturer, the Commercial Aircraft Corporation of China (COMAC). It was named No. Jinggangshan, after the Jiangxi mountain known as the "cradle of the Chinese revolution."

To date, COMAC has delivered a total of 25 ARJ21s.

The planes link more than 50 cities at home and abroad, beginning their first regular international duties between northeast China and east Russia with Chengdu Airlines in October last year. The jet has transported more than 820,000 passengers safely, according to COMAC.

The ARJ21 is China's first turbo-fan regional passenger jetliner. It was put into commercial service in June 2016.

The plane has a range of up to 3,700 kilometers. It acquired certification in December 2014 and completed its maiden flight in June 2016. Mass production began in September 2017.