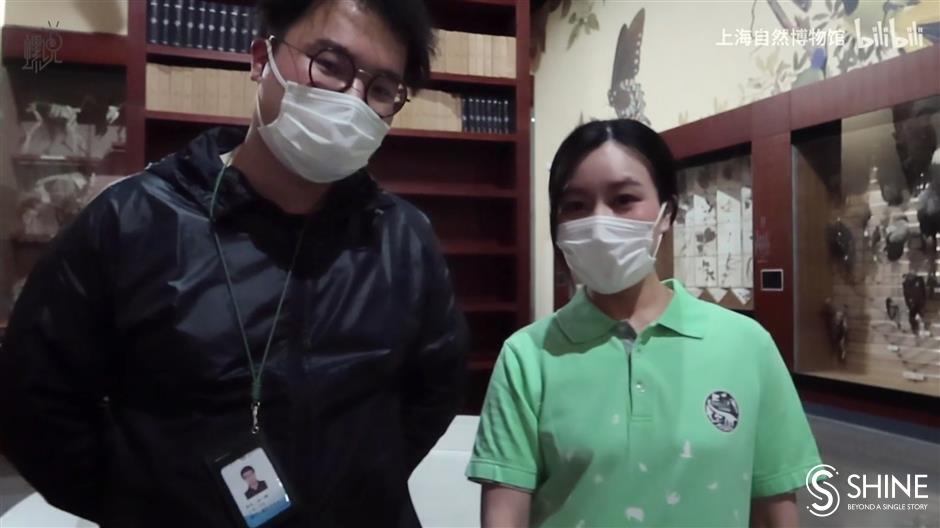 With flashlights in hand, two guides livestreamed their nighttime adventures at the Shanghai Natural History Museum on Monday.

Due to the novel coronavirus outbreak, the museum’s annual “Night at the Museum” event, held to celebrate the International Museum Day on May 18, moved online this year.

In the livestream from 8pm to 9pm on Bilibili, viewers followed the two guides to explore the museum after dark. The tour featured audio effects, augmented reality and live performance.

Gu Jieyan from the museum said the livestream attracted more than 100,000 viewers, including many who were new to the museum.

The stream received an active response through danmu, real-time comments that float across the screen. Viewers were interested in what animals do at night, whether it’s possible to bring dinosaurs back to life and the whereabouts of the mummy displayed at the old museum.

The two guides showed viewers specimens of nocturnal animals including an owl, Chinese alligator and Chinese giant salamander. The eyes of such animals often bear large, elliptical pupils that react quickly to changes in the light, the guides said.

The guides then led viewers to see the dinosaur fossils. Recent studies by Chinese scientists showed that the Tsintaosaurus might have had a big head because CT scanning showed its long projecting nasal bone might grow to support its head instead of nose, guides explained.

And where is the mummy from the Ming Dynasty (1368-1644), the star of the museum’s former site on Yan’an Road? “It was stored well in the museum,” according to the guides.