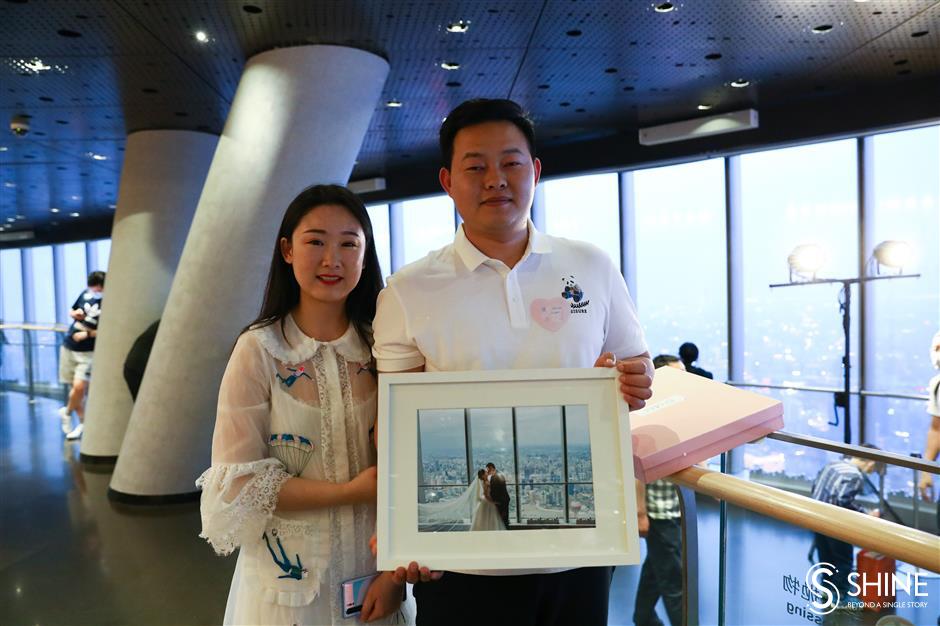 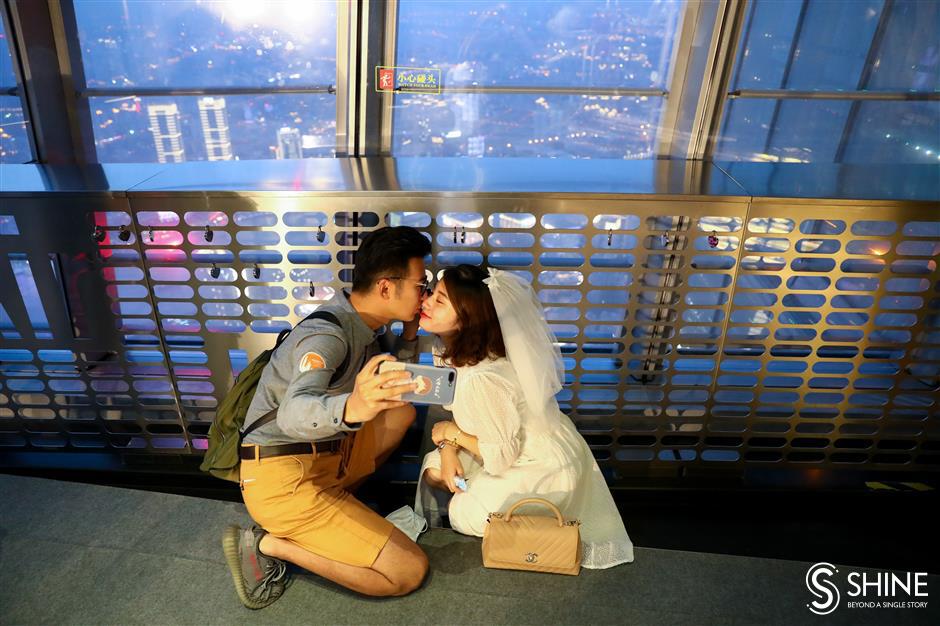 Newlyweds kiss 546 meters above the ground.

Zhang Xuechun was close to tears when she saw her pre-wedding photo in which she, in a white gown, and her fiance, Qiu Yahan, in wedding suit, kiss at “the top of Shanghai.”

“We’ve been through such a hard time,” Zhang said, in a choked voice.

They were among six pair of lovebirds who delayed their marriage plans when they were sent to work on the front line at airports, in hospitals and neighborhoods during the anti-coronavirus campaign.

Shanghai Tower, the second-tallest building in the world, has joined hands with local photography studio Tang Vision to offer them free pre-wedding photo shoots on the tower’s observatory deck.

For Chinese couples, it's common to have photos taken prior to their wedding day.

“We planned to register our marriage on February 2, but postponed due to the pandemic,” Zhang said. “Neither of us has Shanghai hukou (permanent resident permit) and we haven’t been back to our hometown to register the marriage. But it will be soon.”

Qiu works as a grassroots community worker. “My job was to ensure community health and safety. I was so busy as there were so many returning people, and I had to monitor their temperatures and health conditions,” he said.

But luckily, his fiancée supported him. “The whole nation was joining in the fight. I totally understand him, and I feel proud of him,” Zhang said.

They took pre-wedding photos about half a month ago, and received printed copies on Wednesday night when they were invited to attend a special event held by Shanghai Tower.

They were invited to enjoy the beautiful views of the city skyline and hang "love locks" 546 meters above the ground.

This year’s newlyweds, or lovebirds who have made appointments for marriage registration by the end of May, were allowed to visit the tower’s observatory for just 99 yuan (US$13.95) for two, almost one-fourth of the original price, on Wednesday. And photographers from Tang Vision were there to take free photos of them.

According to the tower, hundreds of couples and lovebirds have enjoyed such a bargain.

Lichee and Angie got married on May 11, and they didn’t hesitate to buy tickets after they learned about the offer. “We brought our marriage certificate to take the photo,” Angie said.

Lou and his newlywed wife, both teachers, hurried to the tower after they got off work. His wife especially wore a bridal veil for her photo.