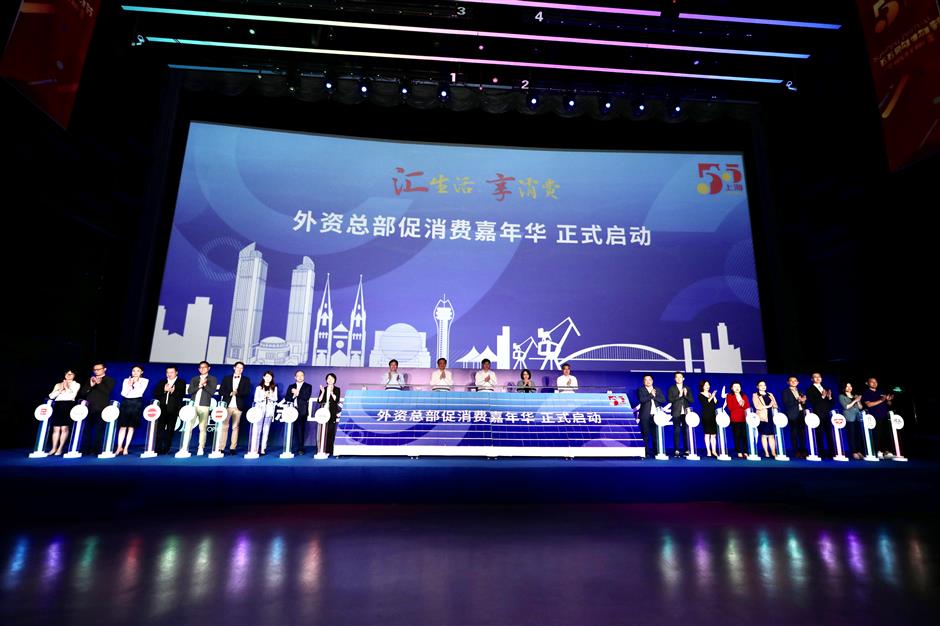 Foreign brands based in downtown Xuhui District launched a series of promotional events on Friday to join the city’s Double Five Shopping Festival.

The headquarters of 18 international brands including adidas, Yum!, Colombia, Burger King, Lululemon, Johnson & Johnson and Starbucks are to take part in the festival by releasing new products or offering discounts.

"The Chinese government has launched a number of policies and measures to support companies restore operations after the COVID-19 pandemic, which helps adidas a lot," said Li Min, an official with the sports brand registered in Xuhui. Adidas and Reebok have released nine new shoe series for the festival.

"We are happy to see the Chinese market is returning to normal and we have full confidence in the brand's future in China," Li said.

Lesaffre, a French yeast manufacturer that took part in the second China International Import Expo (CIIE) and will be at the third later this year, is launching its official flagship online stores soon. The company plans to offer various discounts on June 18, said Yu Zhiqiong, an official with the company.

"We're honored to take part in the Double Five Shopping Festival and understand it is the key period for the Chinese economy to restore dynamics," said Li Li, a Lululemon official.

Li Jing, from US health-care company Johnson & Johnson, said the COVID-19 pandemic had changed people's shopping habits. The brand has thus improved its online to offline and home services to ensure its business growth, she said. She stressed the brand's confidence in developing in Shanghai in the future.

Xuhui District Director Fang Shizhong outline the commercial facilities and history of Xuhui to officials of the foreign brands. The downtown district has over 3 million square meters of shopping facilities, attracting nearly 20 million customers from home and abroad each year, Fang said.

Shanghai's trade and commerce originated from the temple fair of the Longhua Temple in Xuhui District in the Tang (AD 618-907) and Song (960-1279) dynasties, Fang said.

There were 3,657 foreign-invested companies in Xuhui by the end of 2019. They account for 13.67 percent of the total number of enterprises in the district, but contribute 43 percent of Xuhui’s tax revenues, Fang said.

Among the foreign firms, 86 had established regional headquarters in Xuhui, contributing about a third of the district’s tax revenues.

Shanghai’s Double Five Shopping Festival, to boost both online and offline consumption, will launch more than 120 city-level key campaigns over the next two months.

In the first 24 hours after the festival launch on May 4, citywide consumer payments exceeded 15.68 billion yuan (US$2.2 billion). Many shopping malls, including Plaza 66, Global Harbor and The Mixc have seen sales soaring by more than 20 percent compared with last year.